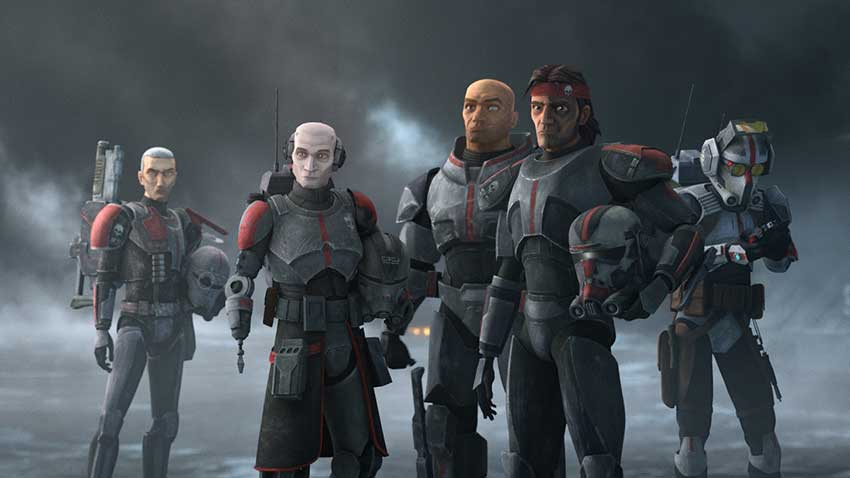 The Bad Batch clones first appeared in The Clone Wars as the Clone Force 99, and the new Disney+ series follows the rag tag team as they become enemies of the new Empire. Producer Brad Rau says The Bad Batch is a “spiritual successor to The Clone Wars.”

The Bad Batch are an elite squad of clones who vary genetically from the other troopers each with a specialty skill. Hunter, Tech, Crosshair, Echo and Wrecker also vary in personality and quirkiness.

The new Star Wars Disney+ series takes place during the transition from the Republic to the Empire following the aftermath of the Clone War. Where does the Bad Batch fit in this new environment? CineMovie got the scoop from the producer Brad Rau, head writer and producer Jennifer Corbett and the voice of the squad Dee Bradley Baker.

“I just found it intriguing and engaging to watch a series where you know, we've seen the Clone Wars where it's the height of the Clone Troopers doing what they're meant to do, and what they were created for, says producer and head writer  Jennifer Corbett. “And the question became, ‘What happens after the war is over? What happens to clones who all they know is being soldiers?’ Especially for the Bad Batch who do things differently as it is with the Republic and how they fit in once it becomes the Empire.”

Corbett adds the show lays the groundwork for what the Empire becomes later on in the live-action movies. While most planets and people are relieved the war is over, they are not yet aware of the implications of the regime change except for the Bad Batch squad.

Fans of The Clone Wars may feel right at home with the look of the new series. The Bad Batch producer Brad Rau says the animated show is a “spiritual successor to Clone Wars” and remained faithful to the aesthetic with a few embellishments.

“We wanted to honor the style and the legacy of that,” says the producer. “That being said, the whole team at Lucasfilm and our partners at CGCG, we've just tightened everything up. So the fidelity is tighter. The style is tighter. The rigs are tighter. The way that it's designed is still the legacy of The Clone Wars, but a little more detail. Little bit more focus. And the work we're doing, you know, for me, having worked on a lot of these shows, with a lot of the same people internally. It's just the best team and I think we're doing our best work ever right now.”

Another carryover from previous Star Wars’ series is voice actor Dee Bradley Baker who has voiced all the Clone army characters. The actor continues the tradition of voicing Hunter, Tech, Crosshair, Echo and Wrecker - the Bad Batch. The actor says the approach for The Bad Batch series is different from what he’s done before.

“Clone Force 99 is kind of another step beyond what I've been asked to do in the Clone Wars series, says Baker. “The Clones are the tricky part for them, is that the differentiation is much tighter between characters. Although it has to be decisive. It has to be clear. The Bad Batch are actually much further apart from each other, which oddly makes it a little bit easier to jump from character to character to character. I mean, for me it feels like I'm jumping from rock to rock on a stream.”

The Bad Batch premieres on Disney+ on May 4th in time for Star Wars Day with a special 70-minute premiere, followed by new episodes every Friday starting on May 7.