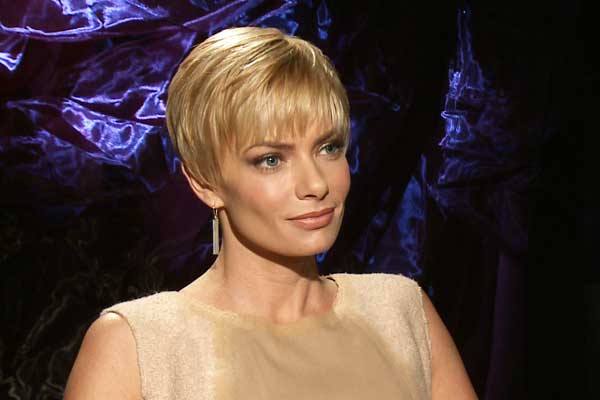 Jaime Pressly likes a good old-fashion scare rather than gore when it comes to horror movies. THE HAUNTED HOUSE 2 star is also talking to CineMovie about keeping up with her funny co-stars  Marlon Wayans, Cedric the Entertainer and Gabriel Iglesias  on set.

Jamie Pressly joins Marlon Wayans in a sequel to THE HAUNTED HOUSE, and in this follow-up, they're spoofing last year's hit horror film The Conjuring.  When it comes to horror films, Pressley ("My Name is Earl"), she likes the classics like Nightmare on Elm Street, Halloween, The Exorcist, Poltergeist, but as she's matured, her movie-going preferences leans towards thrillers and not the gory horror films. However, the one film that still frightens her is the Exorcist.

Jaime Pressly considers herself a comedian, and keeping up with stand-up comics and HAUNTED HOUSE 2 co-stars Marlon Wayans, Cedric the Entertainer and Gabriel Iglesias was a challenge, but she held her own. She tells CineMovie's Fernando Esquivel that they each "heightened each other's performance" and they were all on their toes keeping up with each other.

THE HAUNTED HOUSE 2 actress also touches on how they handled playing with stereotypes for laughs, and how she was responsible for the white jokes.  Check out the interview below.