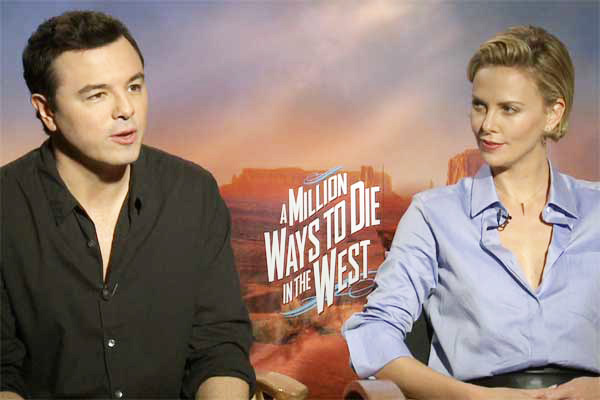 Seth MacFarlane famously gets in trouble a lot for stereotyping people, minorities and women, but in his new Western movie, he pokes fun at just about everybody except Mexicans, a staple of the Western genre. CineMovie, with help from his MILLION WAYS TO DIE IN THE WEST co-star Charlize Theron, put him on the spot to ask why Mexicans were left out in the dust, but turns out they were just left on the cutting room floor. Listen to the interview below and watch the clip.

The creator behind "Ted" and "The Family Guy" is known as an equal opportunity offender when it comes to making fun of minorities, celebrities, women (Oscar musical) and just about everybody else under the sun. And as we should expect from MacFarlane, he shocks us with funny remarks at the expense of minorities in a Western setting in the hilarious A MILLION WAYS TO DIE IN THE WEST, but the native Indians, Chinese and blacks get some payback in the movie starring MacFarlane in his first leading man role along with Charlize Theron, Liam Neeson, Amanda Seyfried and Neil Patrick Harris.

In A MILLION WAYS TO DIE IN THE WEST, MacFarlane plays a cowardly sheep farmer who is out of place in the savage old West, and as the star, writer and director, he takes opportunity to poke fun at everything we know about the Western genre, but we noticed he left out a group that we often see stereotyped in Westerns  - the Mexican banditos.

During a press conference in Los Angeles to promote their movie, Charlize Theron and Seth MacFarlane answered questions about the movie and CineMovie put MacFarlane in the hot seat about leaving out Mexicans on the joke. While he didn't have an answer for us, Charlize prodded him for one in a funny exchange between the stars and CineMovie. Eventually, MacFarlane remembered that there was a deleted scene where the Mexican people get their own payback. Take a listen and watch the funny deleted clip.