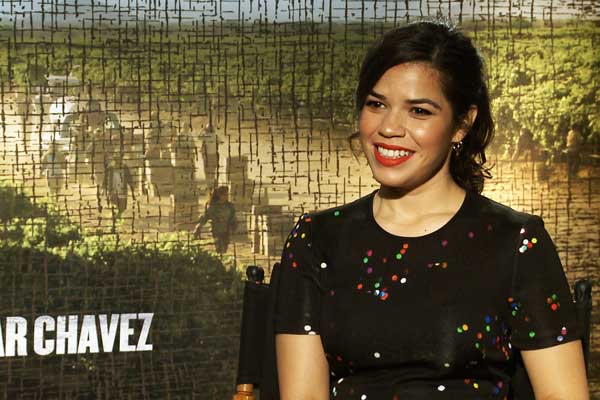 Cesar Chavez wasn't alone in his fight to bring civil rights to farm workers. America Ferrera portrays Helen Chavez not just as the supportive wife and mother of eight, but as an activist herself whose story we know little about. Ferrera is talking to CineMovie about playing the great woman behind the great man in CESAR CHAVEZ.

As the saying goes, "behind every great man, is an even greater woman" and that was the case with the iconic labor leader Cesar Chavez. In a new film by Diego Luna, the story not only focuses on the his struggles to bring basic human rights in the California fields, but how his sacrifice affected his family. Luckily we're not seeing the long suffering wife portrayed in this biographical film, but Helen Chavez comes across as a heroic woman herself as she juggled motherhood, activism and running the household while her husband spent the days in the fields either working or picketing.   Watch Trailer

When America Ferrera (The Good Wife, Ugly Betty) first got the call from director Diego Luna to play the wife, she immediately thought it would be a background role as the supportive or non-supportive wife, but he promised it was much more than that. Like most of us, America had not heard much about Cesar Chavez's wife. However, she was an integral part of the movement in the 60s to bring civil rights to migrant workers even going to jail willingly for protesting. The mother of eight children also ran the credit union, fed the picketers and walked the picket line. America was lucky enough to meet the real-life Helen Chavez for first person accounts of those times.

Ferrera talks about what she discovered about the hard-working woman behind the great man in our interview with the actress.