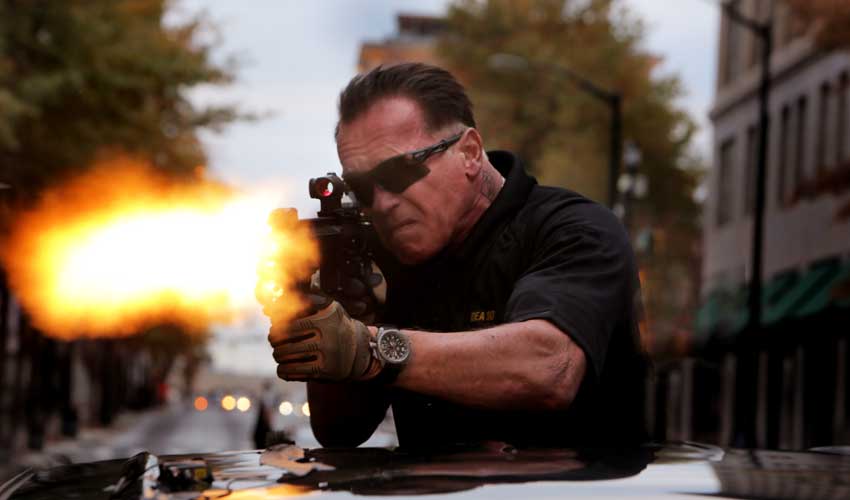 Arnold Schwarzenneger's hair was sabotaged by his SABOTAGE director David Ayer, and he's telling us that he wore a hat off set to cover his new hairdo. Schwarzenegger and his costars Josh Holloway and Joe Manganiello explain how they were put through the ringer as well to portray an elite DEA task force.

At a Los Angeles press conference with the stars of SABOTAGE, the new action thriller from director David Ayer (End of Watch, writer of Training Day), the cast reveal the training was intense because the director wanted authenticity in telling the story of the DEA task force who are hunted down by the drug cartel. Arnold Schwarzenneger, Sam Worthington, Terrence Howard, Josh Holloway not only had to act the part, but look it as well. In this Q&A with the stars, poor Arnold explains how he was horrified when they were dying and cutting his hair as the director looked on.  David Ayer tells CineMovie he pushed the guys for a certain look which made them out to look like hoodlums and less like law enforcement but that was the reality behind the DEA.

Arnold also reminisces about the old days of Hollywood when the budgets were much higher, and he describes how things have changed behind the scenes of filmmaking.

Q: How was the training involved in this film?

Arnold: David was the one that was a fanatic about bringing the authentic realism to the screen. He made us, for months, go down to the LA Swat team and hang out with them because he wanted us to think like them, to look like them and I want you to train and work like them.

Joe: When portraying someone in real life you want to do them justice. I screen tested for David (Ayer) thirteen years ago for Antwian, and that's the first time I read a David script. They talk about addicts chasing that first high and for the past fourteen years I've been trying to find another script as good and visceral as Training Day did.

Josh: It was amazing to see people show up to that training and see people with no ego whatsoever and be completely available and go through that training. We were sweating. Arnold was in there sweating right next to us and it was fantastic. David also had us sparing each other. You don't put head gear on actors but it really gelled us as a team. 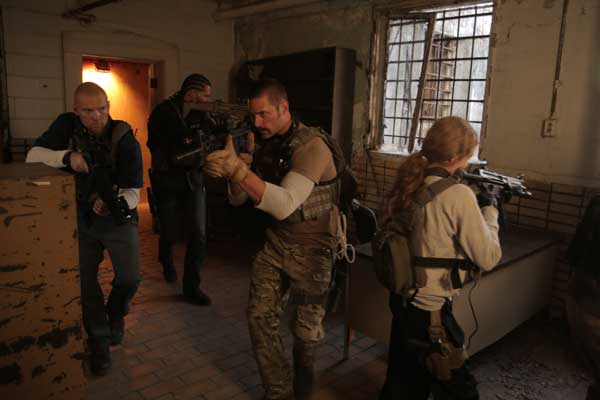 Q: Arnold was the role challenging on a physical or emotional level?

Arnold: I think from an acting point of view it was most challenging because I've never played a character like this. The characters that I usually play are usually black and white, he's the good guy that wipes out the bad guys and with a little bit of humor throughout the movie and that's it. In this film, the character was written quite differently and that was appealing to me and I knew a David Ayers script and writing and directing so I thought it would be great for me to be challenged like that. When we got together David had a whole list of things that he wanted me to do and I loved that he pushed me. Sometimes directors get intimidated when they meet actors like me but David came in being very clear with a set of things that needed to be done. He wanted me to do weapons training and I said 'why do I need weapons training. I've shot more guns then anyone in movie history so why do I need to go through weapons training?' But all of this helped me build the character and made me perform the way I did. It was all the rehearsals that I did the talking about the character and learning how they think. David wanted me to hang out with those guys and learn how they think, why are they the kind of guys that they are, why are they willing to risk their lives to save others. What kind of mentality does it take; the confidence and the training and dedication. It's a very complex world and he wanted me to get into that. Today films aren't like the 80's and 90's where a studio throws 100 millions dollars at you and says lets do a great action movie. Those were the old days. Today they now give you half of the money and you have to be very frugal and you have to rehearse and be prepared. To have all this stuff be second nature it's very important and to understand the character very well is very important. I come from a world of reps, the more reps you do the better you get. I believed what David said, the more often you go down there and do that training with the Swat team the better you will be on the set.

Q: Arnold, since you've been away from films the style of shooting has changed and gone to more of a hand held look. How do you feel about that?

Arnold: Ten years ago before I became Governor 'til now things have changed. The style of shooting is different. There are younger directors out there that are being hired because they have new ideas and new visions. There's also a bunch of young guys making decisions where in the old days there was one guy there making the decision. Budgets are half of what they used to be because the rest of the money is being saved for franchise films and big sequels. It's a different world but you just have to adjust to that. I really enjoyed this movie and the new way of shooting.

Q: Arnold, do you think any of your kids will follow in your footsteps and do action films?

Arnold: My son is heavily into acting and at the same time he's in University studying business. After that he can decide if he wants to be a full time actor. Right now he's a terrific A student and hopefully he'll decide what his passion is. The most important thing, no matter who it is, you have to follow your passion. I always try to teach kids to find what their passion is because I despise when kids get out of college and have no idea what they're going to do. I tell them to think about it, don't listen to your parents or your coaches, what you should do is listen to your heart, listen to yourself. What is it that you're passionate about and follow that. It may not be what I want my son to do, he may say he wants to become a car mechanic. But if that's what his passion is then that's what he should do. The same with acting, I hope he has a successful career and I hope he does action movies or whatever movies that he does. Right now, the way he looks he should do more love stories (laughs) then action films.

Q: How was it working with Arnold?

Josh: What I found most impressive about working with Arnold is that he's not surrounded by entourage, he was completely present with us. There was no wall to get to Arnold to speak with him on set. He was just one of us, laughing, joking, very present and a part of the team and that was impressive.

Joe: I had a poster of Arnold, Mr. Olympian on my wall as a kid. I've seen everyone of his movies and have ha 10 minute conversations with my brother in Arnold's voice doing all of his movie lines without breaking character. The reason I picked up a weight in the first place and started body building was because of Arnold. The reason I've ever dream in my head that someday I might be an action hero in a movie was because of Arnold. It was daunting at first, in my mind I was saying don't do something stupid, don't be an idiot. But Arnold has become one of my best friends and you couldn't wish to have a better friend in the world.

Arnold: I was very happy to help Joe but I didn't realize that his six pack was going to be better then mine (laughs). 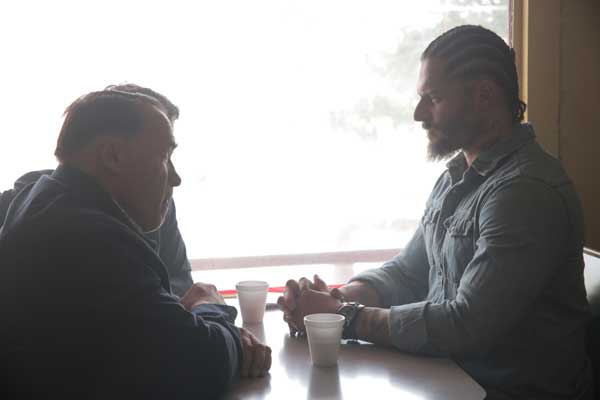 Q: Arnold what did you think about your look in this film?

Arnold: I cannot take credit for my haircut, and I refuse to take credit for my haircut. I just want to make this very clear that it was David's idea. He was sitting there when they cut my hair. He was sitting there when they dyed my hair grey. I was like what's going on first... it's grey then black then grey again. Then they put a pot on it and just shaved it all around. It was terrible, I wore a hat the whole time I was off the set. People were always telling me Jesus you look weird but that was David's way of authenticity.

Arnold: I think it's great to be over 60! The way I feel about age is, I don't think about it when I go to the gym that I'm older. I just think I want to get in shape. Same when I do a movie - I don't think what age I am. I just do the movie. I do it as well as I can and I go all out. I'm very fortunate that I exercise everyday so that I start out already in good shape. So someone like David Ayers comes along and tells me I want you know to do the martial arts training and I'm going to send over some cage fighters and some gun experts. So now I can deal with that. I never even think about what is my age.