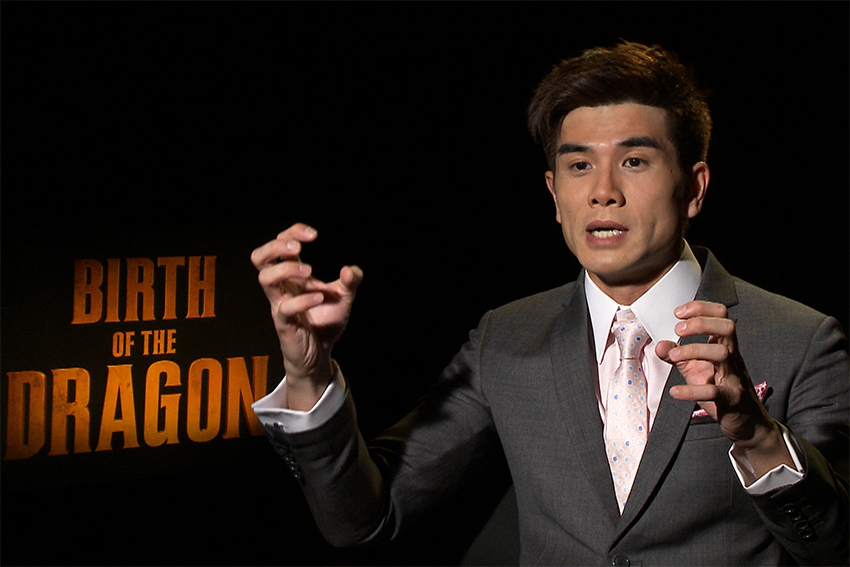 BIRTH OF THE DRAGON centers on the legendary fight between a young Bruce Lee and Shaolin monk, Wong Jack Man which most say had had a profound change on Bruce Lee’s fighting style and star power. CineMovie sat down with actor and martial arts choreographer Philip Ng who plays the legendary Bruce Lee. Watch the interview below.

BIRTH OF THE DRAGON is in movie theaters August 25.

Set in the 1960’s, the story begins in San Francisco’s Chinatown where a young Bruce Lee (Phillip Ng) is inspired but struggling to make a name for himself, both as a martial arts master and an on-screen actor. When the legendary Shaolin monk, Wong Jack Man (Xia Yu), arrives in San Francisco to observe the state of kung fu in America.

Lee fears that Wong alone can threaten his ambition to become the face of kung fu, and seeks to challenge him to a fight. The two-opposing kung fu masters battle – with the contested outcome destined to transform the history of martial arts.

Lee’s optimism and energy draws many students who sign up for kung fu lessons including struggling yet affable laundromat worker Vinnie Wei (Simon Yin) and a troubled mid-western drifter Steve McKee (Billy Magnussen). The latter encounters an indentured waitress named Xiulan (Jingjing Qu) and seeks to unite Lee and Wong to free her from the ruthless Auntie Blossom (Jin Xing), the leader of a powerful organized crime triad.

“Considering the skill of the opponents and the complete absence of referees, rules, and safety equipment, it was one hell of a fight that took place that day in December. It may have been the most savagely elegant exhibition of unarmed combat of the century. Yet, at a time when top fighters tend to display their skills only in huge closed-circuited arenas, this battle was fought in virtual secrecy behind locked doors. And at a time when millions of dollars can ride on the outcome of a championship fight, these champions of another sort competed not for money, but for more personal and passionate reasons. The time was late winter, 1964; the setting was a small kung fu school in Oakland, California. Poised at the center of the room, with approximately 140 pounds packed tightly on his 5'7" frame, was the operator of the school, a 24-year old martial artist of Chinese ancestry but American birth who, within a few years, would skyrocket to international attention as a combination fighter/film star. A few years after that, at age 32, he would die under mysterious circumstances. His name, of course, was Bruce Lee.

Also poised in the center of the room was another martial artist. Taller but lighter, with his 135 pounds stretched thinly over 5'10", this fighter was also 24 and also of Chinese descent. Born in Hong Kong and reared in the south of mainland China, he had only recently arrived in San Francisco's teeming Chinatown, just across the bay from Oakland. Though over the next 15 years he would become widely known in martial arts circles and would train some of America's top martial artists, he would retain a near disdain for publicity and the commercialization of his art, and consequently would remain unknown to the general public. His name: Wong Jack Man.”