Can A Transformer Be Built? Interview With A Robotics Expert 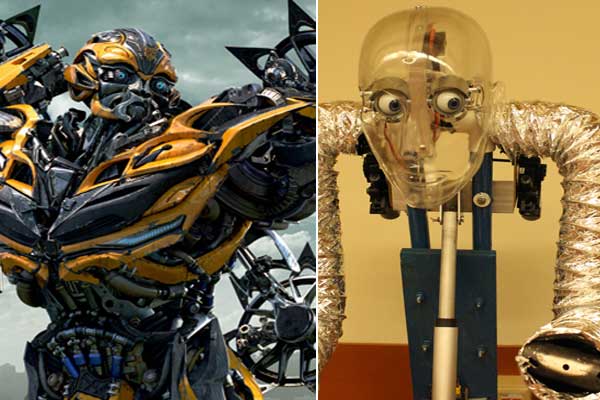 There’s a key reason why Transformers: Age of Extinction has grossed over $1 billion dollars worldwide. The answer: kick-ass robots! The CG team continues to take those small toys we used to play with as kids and expand them to that size only our imaginations had once dreamed of. Cinemovie got the opportunity to chat with a robot specialist and consultant on the movie, professor Walter Martinez in his classroom at Cal State Long Beach.

We took a close look at some fascinating robots in action (Watch Videos Below) and picked his brain about where this robo-technology is headed. According to Martinez, the filmmakers contacted him because they were looking for set design inspiration around Mark Wahlberg’s character. They wanted to see what it looked like inside the garage of a robot inventor.

“They were looking for garages where people build robots. I build robots in my garage and have a whole lab there. They were basically looking for what sorts of things you have in a place where you invent things.”

Martinez explained to us that despite the robots in the film actually being aliens, most of them do follow certain sci-fi laws that were established by Isaac Asimov in the 1950’s like; “A robot cannot harm a human.” Nevertheless, there were a number of different “transformer traits” that compromised the robot realism according to Martinez.

“The Transformers are very fluid and as you can see from the demos here, robots are pre-programed and go in sequence. In the movie they’re really human like. The other thing is, it seems like some of the robots have a conscience. That would be something very difficult to program.” 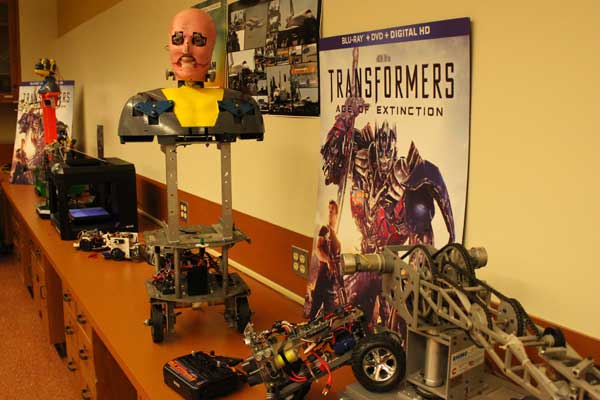 Martinez currently serves as the president of the Robotics Society of Southern California and is in the midst of conducting research on autistic kids and how robots can help them relate and socialize with humans better. In fact, he used one of his robots to help his four-year-old autistic nephew recognize his own name.

“My nephew never responds to his name. You say, "Jacob...Jacob,” and he never turns around and looks at you. I programed the robot to say his name, and it took over the course of 10 weeks to have Jacob recognize his name when the robot calls him.”

Martinez is eager to educate the youth of the world with Robotics. He recently sent over a kit he invented to a university in West Africa with the hope that they spread it to different schools in that region. Eventually, he plans on becoming a “robot ambassador,” bringing the technology to his homeland, Honduras.

“My goal with this is to have anybody in the world learn about the essentials of robotics. I want to go back to my native land Honduras where I was born and raised, and then I want to start spreading it to all of Latin America.”

Now if you’d like to see some robots in action, check out Transformers: Age of Extinction when it arrives on Blu Ray, Blu Ray 3D, DVD and VOD on September 30th!  The four-disc Blu-Ray Combo Pack features more than three hours of crazy bonus content.  Not to mention, Transformers: Age of Extinction is the first to include a Dolby Atmos soundtrack, making the home viewing experience much more realistic and immersive!