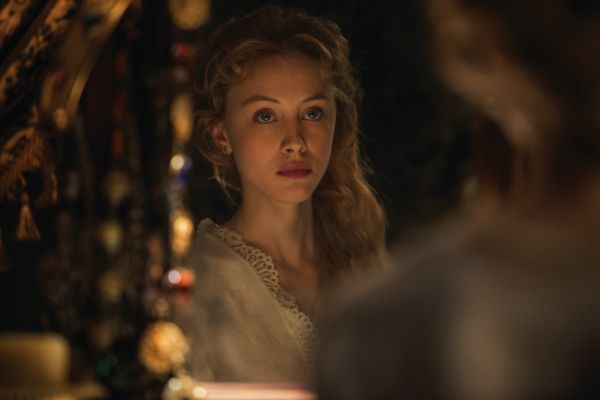 It’s not a bad day at work when you get to make out with DRACULA UNTOLD star Luke Evans.  Canadian  actress Sara Gadon is talking about working with the hunky Welsh actor on the Dracula origins story, and starring in her first major Hollywood production.

Sarah Gadon (Enemy, Belle) plays Mirena in DRACULA UNTOLD, wife of the young Lord Vlad Tees’ (Luke Evans) who makes a pact with a supernatural forces to save his Turkish kingdom. Of course we know how that story goes, but what was it like for the 27-year-old starring opposite her co-star Luke Evans and working on a large scale film? The actress tells us all about it in this Q&A.

Q: What was your first experience with Dracula growing up? Was it a film, was it a novel?

A: I don’t actually remember if I saw Francis Ford Coppola’s Bram Stoker’s Dracula before I read the novel. Both were really important to me, and I’ve had those two influences of Dracula in my life, so I really love both of them very much. I think especially Bram Stoker’s novel “Dracula”; it’s such a beautiful novel, and I think there’s so much imagery in the writing and that’s why it’s lent itself so well to cinema over the years.

Q: Obviously we have various impressions of the women of vampires and Dracula, but we’ve never had an image of a woman interacting with Vlad the Impaler (Luke Evans). So what did you do to create your idea of Vlad’s woman or the wife of someone in the position he finds himself in?

A: It’s so interesting, because people always say “You’re Vlad’s wife,” but nobody ever says to Vlad, “You’re Mirena’s husband.” And I think I’d probably start there. I definitely didn’t think of her as a secondary woman in the film, and for me it was always really important to convey to director Gary Shore that I was interested in playing a woman that contemporary audiences can access and not really feel alienated by this idea of a “princess in a tower.” And I think that kind of dynamic is what I also brought to my relationship with Luke. For me, what I loved about their story is that she wasn’t a woman in a vampire film that’s suppressing her sexuality, or a forbidden love story. She had this pure, unlimiting love for her family, and that was really beautiful. And that’s something that you don’t always get to see, is somebody that’s just in love, and it’s okay. And I think it’s that love that really motivates all the action of the film.

Q: With there being so many Dracula films, what was it about this particular script that you were drawn to? Also, what was the process like for you to prepare for the role?

A: Well, I was really excited to be a part of the Dracula film because there have been so many cinematic incarnations of the film, and for me each film speaks to a point in film history that it was made. So it was a cool thing to think of us putting a contemporary Hollywood stamp on Dracula and all that it encompasses in terms of the visual effects. Even just how we tell the story is indicative of how we are making movies right now, so that was really exciting for me.

In terms of preparing Mirena, we did a lot of work, Luke and I: we read about Vlad Țepeș and his violent background, his very violent relationship with his own family. And so being able to know that past gave us a real starting point. And then as his partner, knowing that he was capable of all that darkness too was an interesting dynamic for us to play. But I did dialect coaching and my usual scene study. I watched a lot of Samurai movies, too, because I thought there was a real Samurai tone to the story, and I think you really can see that in scenes like the ? Handoff scene with the carriage approaching the Turks on the mountain. I actually gave Luke a Samurai box set when we finished filming. And of course Gary is really influenced by Steven Spielberg, so he asked me to watch a lot of early Spielberg stuff because of the banter between men and women. So it was those kinds of films that I watched.

Q: What scares you in life or has scared you in life, either as a child or an adult, that helped you to play scared?

A: I’m just generally scared of the dark and jumpy in terms of being alone in the house at night. And often in this job you travel a lot for work, so you’re always living out of these weird executive apartments for months on end, and so it’s always the new environments and getting to know the sounds of a place that’s always a really freaky time.

Q: You mentioned that this is the biggest film that you’ve worked on, so I was wondering what it was like for you to be on set where there’s just a lot more people than you’re used to.

A: Yeah, it was definitely the biggest-budgeted film I had ever worked on, and I was really blown away by the resources, ha ha. I kind of thought: “Wow! Look at all the stuff they have access to! This is amazing! And we’re going to shoot 35 anamorphic film? What?!” So that was really amazing to see, all of the resources that Gary had and that we had. And of course, being able to work with some of the best people in the industry working today: Academy Award-winner Ngila Dickson, who designed our costumes; Daniel Phillips, who designed the hair and makeup; John Schwartzman was our D.P., and he's a classic cigar-smoking Hollywood D.P. All that stuff was really cool. And I thought it was going to be really, really different. But ultimately it kind of wasn’t, because when Luke and I were in a scene together it was still about the two of us finding each other in a scene, and everything else kind of faded to the background. So in a way it was different, but in terms of the actual work, it wasn’t.

Q: You and Luke had mad chemistry in this movie. Other than Boris Karloff, Draculas have always been a real hunk of a man. What was it like to play love scenes with Luke and him biting you?

A: It was great! Luke is a sweetheart, and we got on really, really well, and we could see the humor in the 10-hour days making out with each other. So yeah, it didn’t hurt that he was easy on the eyes and really buff for the film; that is an added plus, icing on the cake for me.

Q: Maybe this is a stretch, but can you talk about how your character is a little Lady Macbeth-like?

A: I will say that I think there’s something very tragic about Mirena, and even though she thinks that good will reign over evil and she thinks that she’s in control of her decisions, ultimately their whole relationship is out of their hands, and it’s that tragic love story element of the film that I really love. Maybe that’s really dark to say, but I really thought it was beautiful and tragic. So for me, that’s what I loved about the character.

Q: You were shooting this film in a lot of interesting locations. Can you talk about some of the locations and the things you discovered about Northern Ireland? Did you go to visit anything in the area, outside of the shooting itself?

A: It was amazing to be in Northern Ireland. I think there’s something very atmospheric about a Dracula story and the environment is always a really important element of the storytelling. So being in Northern Ireland and being able to access these really mystical locations was really something that added to the overall aesthetic of our film. And we shot on blue screen and green screen, and we shot on sets, but we also shot on Divis Mountain and Tollymore Forest and the Giant’s Causeway. Those were beautiful places to go. I mean, it was Northern Ireland in the fall, so it was freezing cold and pouring rain, and we’re trudging through the mud, and it all just added to the heightened stress of our characters. That really helped. But being in Belfast when I wasn’t shooting was a really interesting experience; of course it’s a place that’s coming out of a long, tumultuous history of violence and struggle, but the people were were really incredible. We had a lot of people from Belfast working on our film, and they are some of the funniest, nicest, engaging people that I’ve ever met. So that was really amazing, to meet the people of Belfast and to be able to work with them. That’s the cool thing about being an actor: you get to travel around the world and actually live in places, so you get this underground experience of a place. You get to go beneath the surface and really understand what makes a place tick.

Q: How was it working with Gary Shore for his first film?

A: I’ve always considered myself to be a very director-driven actor, and it’s how I find projects, in a way. I’m really drawn to the people who are helming them and directing them. So when I met with Gary, I was really just taken by his energy and the passion he had for making his first film, and there’s something really special about being a part of somebody’s first film. It’s a unique experience that you have. So I was really grateful to be a part of it. I think he really worked hard to try to understand our process as actors and what we needed and how we were going to work, which is a really challenging thing for a first-time director who’s making a film of this scale to do. So I think he was really good — especially with the visual effects — conveying to us his ideas of what was going to happen. He was running up to me with a laptop all the time saying, “It’s gonna look like this!” and it’s like, “Thanks!” He just had a lot of energy and passion for making this film, so it was really great to work with him.