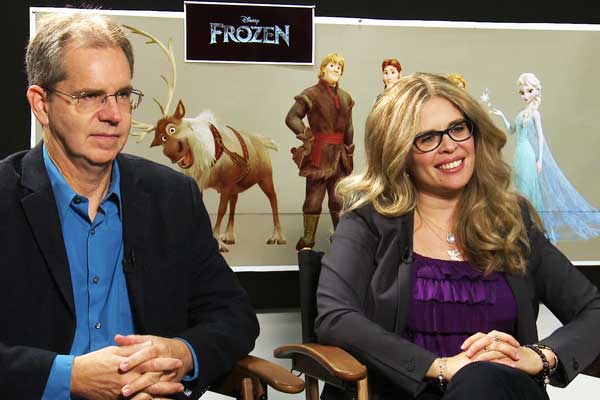 Chris Buck and Jennifer Lee talk to CineMovie about the extra goodies on the home release of FROZEN, and whether the hit Disney film will be getting a sequel.

The film starring the voices of Kristin Bell and Idina Menzel has taken in over one billion dollars worldwide cementing FROZEN as a bonafide hit and FROZEN will continue making money when it arrives on Blu-ray and DVD March 18.

CineMovie's Sue Evelyn Gil sat down with the directors at the Walt Disney Studios in Burbank where the two Oscar-winning filmmakers give us insight into the cool bonus features on the Blu-ray and DVD release for FROZEN. One of the awesome extras include footage from an early version of Frozen when Walt Disney wanted to bring the Snow Queen to the big screen. Other extras will include behind the scenes on the making of FROZEN.

Since FROZEN proved a hit with just about everybody and at the box office, the question remains whether Disney will go ahead with a sequel. Chris Buck tells us there is no word yet of a sequel and he's ready for a vacation after working years on the film. Jennifer Lee adds that they are working on a Broadway musical and really haven't sat down to discuss where the story of Anna and Elsa would go next, and of course the adorable snowman Olaf.