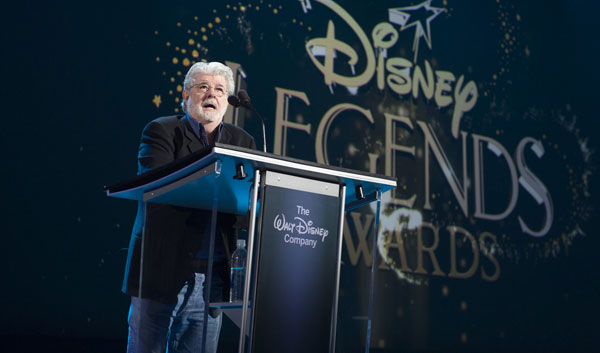 George Lucas was honored as a Disney Legend at Friday’s D23 Expo in Anaheim, California. While accepting his award, he spoke of his lifetime admiration for Disney, and revealed what Disney character was behind the inspiration for Jar Jar Binks.

Walt Disney Company Chairman and CEO Bob Iger presented the man behind films such as Star Wars and Indiana Jones the Legend Award for his contributions to Disney. In 2012, Lucas sold the rights to his Star Wars franchise to the house that Mickey Mouse built. Aside from that, he worked with Disney before that on Disneyland attractions.

In accepting his award, Lucas says he always wanted to be part of the Disney family. As a long-time fan, the Star Wars creator visited the theme parks every year since it first launched, and he’s visited every Disneyland Park in the world. He plans on attending the Shanghai park when it’s complete.

Lucas also told fans at D23 about the influence Disney had on his work. He may have been kidding, but Lucas said his favorite Disney character is Goofy, and that character was the inspiration behind Jar Jar Binks. “I love Goofy,” he proclaimed. “And I love Jar Jar Binks.” The fans applauded his words, but that still might not change many minds.