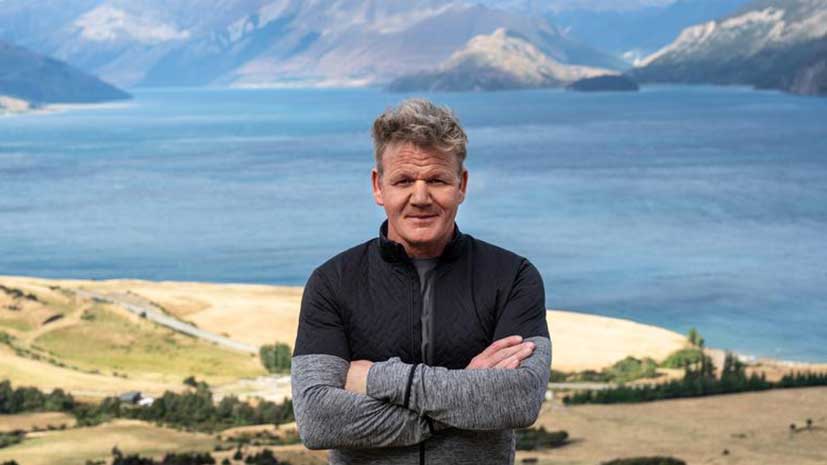 You won’t hear Gordon Ramsay calling any of his guests on his new show an “idiot sandwich.” The multi-Michelin-star chef and personality behind "Hell’s Kitchen," "MasterChef" and other cooking competition shows gets out of the kitchen and into the real world through food and adventure in National Geographic’s six-part series, “Gordon Ramsay: Uncharted.” He travels the world meeting indigenous people and local food experts to explore cultures, customs and exotic flavors unique to each location. Expect to see a softer side to Gordon Ramsay on the Nat Geo show, according to some of the local people who served as guides to his adventures.

The local experts admit they were nervous to meet the abrasive chef and television personality, but the Ramsay they met was the opposite of his public persona. Ramsay visited Hawaii’s crashing surf, trekked a snow-capped Alaskan mountain, rappelled down a Moroccan waterfall, kayaked in a raging river in Laos and dived through New Zealand’s shark-infested waters and hunted off a cliff in Peru all for the purpose of finding an exotic ingredient for a dish.

Everyone is surprised Ramsay would put himself through hell for cuisine but the ironman athlete is used to roughing it for sport. In “Uncharted,” Ramsay puts the sport into his cuisine through his adventures. The show’s executive producer Jon Kroll, tells CineMovie he was up for anything including some dangerous activities. 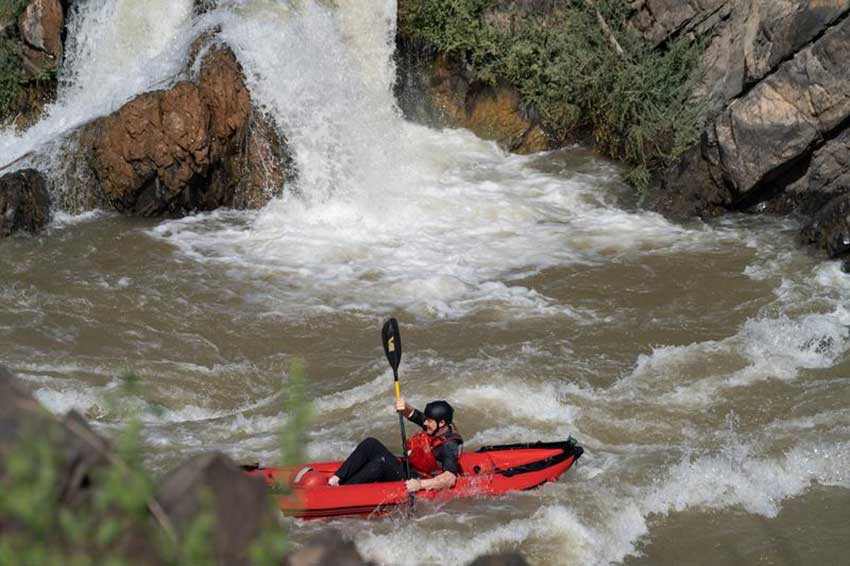 For the Laos episode airing Sunday, August 18, Ramsay goes down a roaring rapid in an inflatable kayak near one of the world’s widest waterfall. Mick O’Shea, Laos Local Cultural Guide and Adventurist in Southeast Asia tells CineMovie the chef was a good sport and brave in a situation that could've turned dangerous at any moment. He does admit Ramsay’s hands were shaking but overall he braved the rapids without serious incident. He also adds no adventures he proposed was too crazy for Gordon to embark on which surprised him given his knowledge of his public persona.

“The nice thing was that he was coming to my hell’s kitchen in a sense. I knew he’d completely be out of his comfort zone and I was the guy who had all the power. So I wasn’t intimidated, I was more curious. He impressed me. At the end of the day, he was just really a down-to-earth guy, and I think I saw his real character.

The Laos local guide believes Ramsay was genuine in his reactions since you can’t fake it for hours on end.

“He couldn’t have kept that much of a straight face, says the local expert. “He couldn’t have put on a poker face and be nice for all that time, all those hours when the adrenaline is pumping. He had a very genuine interest in the adventures, the cultures and the culinary experiences there.” 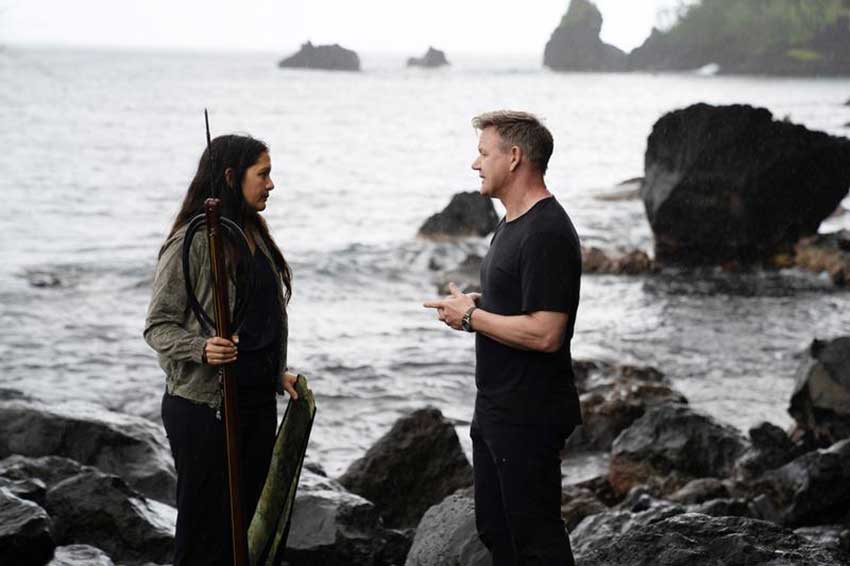 Hawaiian Free Diver and Spearfisher Kimi Werner had the same sentiment before and after working with the masterchef for the Hawaiian episode. When National Geographic called and asked her to be part of the show she agreed because of her positive experience with the company in the past, but they didn’t mention Ramsay’s name until later.

What!” Come on, I did get a little nervous”, she says. “Is he going to be like this cocky guy with attitude because that’s not what I’m interested in. But it ended up being the opposite and it made me happy. I started to think the reputation he built for himself is really more of a character. I don’t know or maybe I just got a good side of him.”

She too called him down-to-earth, humble and best of all, a good listener and student. Initially she was worried having a crew of camera men, safety divers and the personality would scare the fish away, but Ramsay was able to catch a fish because he followed direction very well. Werner has a theory as to why Ramsay yells at his show contestants.

“Is it because you’re such a good student that you have no patience for people who aren’t.”

Werner may have figured out the method to Ramsay’s tv madness.

Executive producer Kroll gave us more insights into what he perceived as the “shouty chef” before he met him. The chef actually put his ego aside for “Uncharted” says the show producer.

“In this environment, he’s the one being critiqued and he’s got the harshest critics of all who don’t know who he is and don’t care about his Michelin stars, says Kroll. “So I think there’s a level of humility and I think the thing I learned about him is that he’s really sensitive. Like when the people didn’t like his alpaca hearts, he was really sad, but I will say he’s really brave about it because he told us, ‘I want their honest opinions and I don’t want you to edit them out. I want you to include them so people know how they really felt.’" 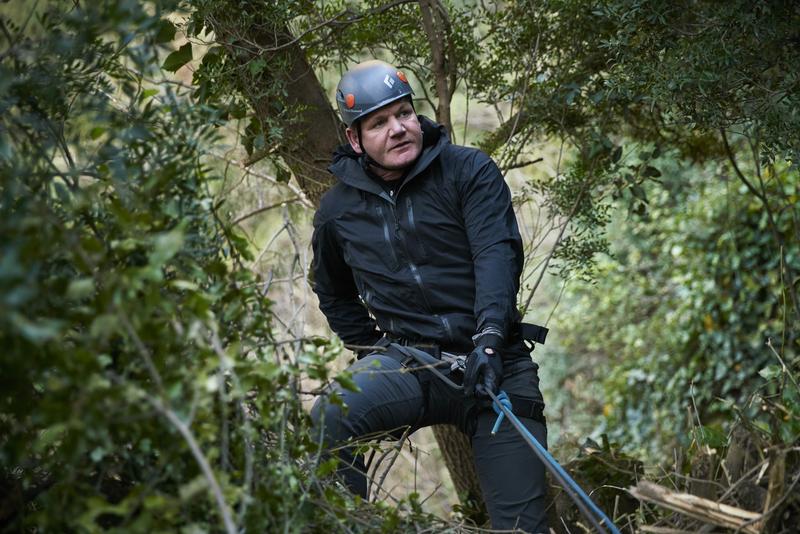 Kroll also revealed to CineMovie that Ramsay’s spiky coif is of his own doing. You would expect the chef to bring along his hairstylist to achieve his classic look for a shoot but he travels bare bones, and starts shooting immediately when he arrives off the plane, up until he leaves after four days in each location.

The award-winning chef’s National Geographic show has already landed a second season so expect more dangerous situations for “Gordon Ramsay: Uncharted” next year. Shooting some of the first six-episodes, Ramsay enjoyed not being recognized in some parts of the world, so Kroll was tasked with finding more locations where his name and face are unknown.

“He actually did not approve a few locations of the new group that we gave him because he said, ‘they’ll recognize me here. I like going places where they don’t know who I am.’ So he’s really embracing the humility of going to a place where they’ve never heard of Gordon Ramsay and he likes it,” says Kroll.

So maybe we had Gordon Ramsay’s all wrong, and he’s a softie. Hence, his new show has a fitting title. “Gordon Ramsay: Uncharted” airs Sundays 10/9C.

Watch the aired episodes at https://www.nationalgeographic.com/tv/gordon-ramsay-uncharted/.