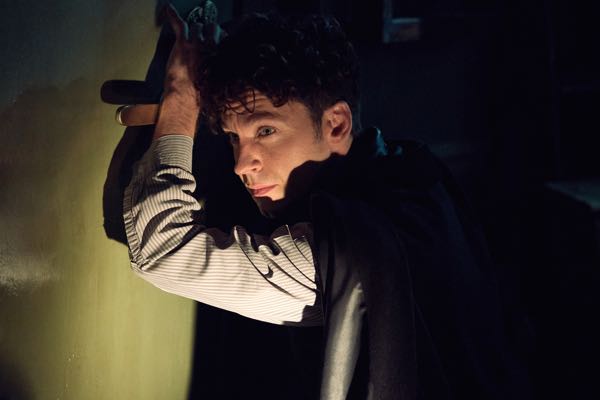 Harry Houdini and Arthur Conan Doyle are both legends in their own right. Houdini was a master magician and escape artist. Doyle was the creator of Sherlock Holmes and author of those and other books. A new Fox series makes Houdini and Doyle crime solvers in the early 1900s.

Michael Weston plays Houdini. After a Television Critics Association for Houdini & Doyle, Weston stuck around to speak more with a group of reporters and we were there to ask him questions about magic tricks and Houdini history. "Houdini & Doyle" airs Mondays at 9PM on Fox.

Q: How do you describe Houdini and Doyle’s relationship and how it changes?

MW: I think Houdini enters as this very cocksure, international celebrity when that didn’t really exist and he feels like he has all the answers. I think as a man and personally, he had very few answers. He was very lonely and in need. He had his mom. He’s this crazy sort of odd mama’s boy. So he forges this friendship with someone that he respects but also sort of frustrates him and he can’t believe that this humble man, this intellectual that he secretly admires could be into all this supernatural crap. So I think he comes in thinking he has all the cards and then he realizes in Doyle he has a real challenge. It’s like a great boxing match and he also realizes he has a great friend. I think that friendship emerges little by little but becomes a deep sort of anchor of his life. In this series, I think it’s really fun but these writers are so great, they sort of leave in this great clever wit and fun, but it also resonates on an emotional, personal level too.

Q: How much magic do you get to do?

MW: I get to do a lot of magic. Little by little they pepper that in. I think if were to get a second season, I’d be logging some serious hours at the Magic Castle. 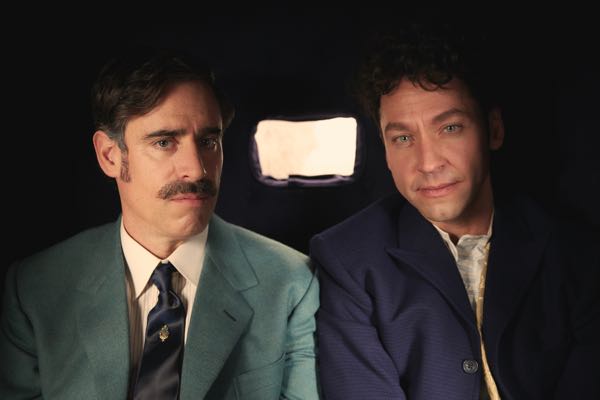 Q: What’s your go to trick you can always do at a party?

MW: I’m very amateur at this point and I need to spend many hours with a deck of cards. But there’s this guy Danny Hunt who is an actual escapologist who follows Houdini’s stuff. He showed me how to disappear a card and appear it again. That’s the best trick that I have. It was fun to learn. It was hard. Harder than I thought it could be. Oh my gosh, hours.

Q: Is part of your job to make magic cool again?

MW: I don’t think that way because I found so many people that love magic in this crazy way that I didn’t quite understand but they think it’s amazing. This guy sort of embodied the inexplicable in a way that still people can’t really figure out exactly how he did certain things. They’ve got ideas and they can sort of ironically say, “Hey, yeah, I know how he did this” but there are a lot of question marks. I think this guy in himself when he does the feats that he did, they sort of live on their own. They’re still sort of minor miracles and they’re still sort of inexplicable. I think people love magic and when you can make someone feel that sense of wonder again which I feel like this show really does do. It gives you that sort of nostalgia for that naivety of that time period and then also re-instills you with this great sense of wonder. I think you have a challenge and it’s something we can actually do in this show and it’s been really fun.

Q: Houdini was Jewish. Does that play into the show?

MW: Yeah, it does actually. I forget exactly what episode but we deal with Houdini was up against a lot of racism in his life and a lot of anti-semitism. He had to find his way through that in his real life. There’s a story where he gets in a big fight. I think it is episode six, I can’t remember exactly, the one with the aliens. These aliens are people that have been living underground and you’re not really sure where they come from. The town is this very bigoted town against them and they’re scared of them. It’s a very deep, emotionally potent story. He relates deeply to them and he’s confronted by this racism and antisemitism immediately. He’s a very brash character and he comes up against it and it touches a chord deep in him. 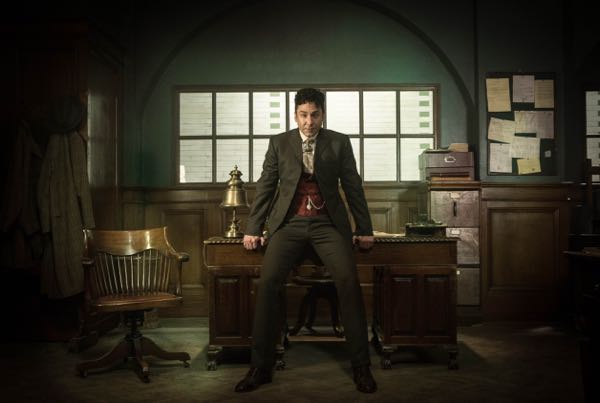 Q: You’ve played some outrageous characters in movies like Brooklyn Brothers Beat the Best and Gravy. Is it a different job playing someone as disciplined as Houdini?

MW: Yeah, I think what was fun about this character is there is a madness to him. There’s a mischief to him and there’s this great sort of showman persona that precedes him by miles. I think behind that is this guy with a lot of questions and I think a very vulnerable soul. In that, it’s a great character to play and it’s very different than those characters but there’s a lot of that kind of fun in it. I think when all of that is torn away, there’s this very simple man who is looking for answers like the rest of it.

Q: Have you ever done a costume drama before?

MW: Not on TV, nor in a movie I don’t think, not that I can remember. I love it. This is one of those jobs, it was like the job of a lifetime. I just love every second of it. I love the people creatively involved in it. The scripts were wonderful. Every element of the design from the costumes were these glorious clothes that you couldn’t believe you got to wear. The sets were spectacular so every time, it was magical. You had those moments and it’s sort of intense for an actor because you’re put through a lot of hair and makeup but it’s great. It was special. 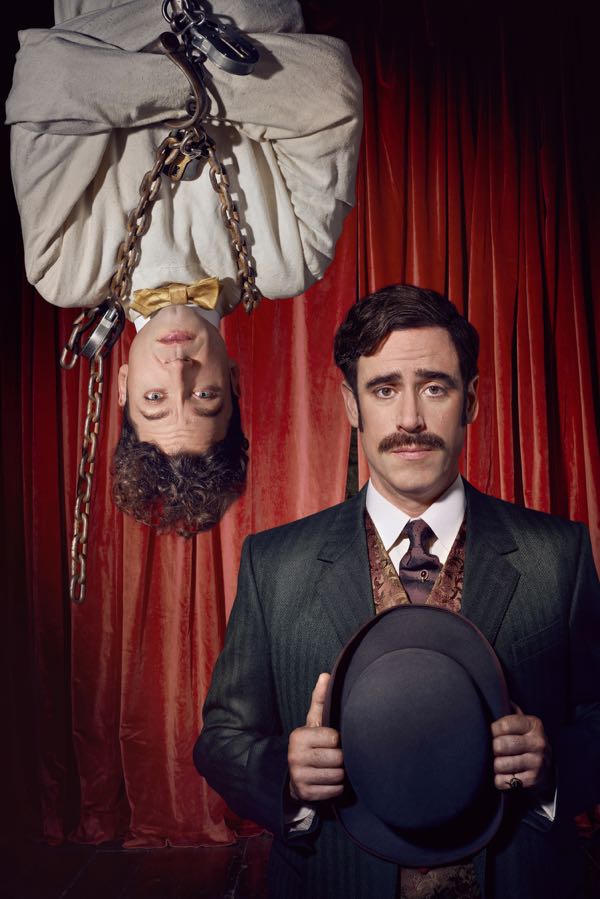 Q: Did you read a lot of books on Houdini?

MW: You know what, over the course as it was happening. I got this role and we were shooting in a week so that was that. I had no time so I learned on the fly, on the run sort of as I did my magic. Same deal.

Q: Is that good sometimes?

MW: Yeah, it is. That’s how you do it. I love it because it’s a total challenge and it’s scary as hell but you just do it. You just jump. It was great.

Q: Did you learn anything about the era that you didn’t know before?

MW: To see where Houdini actually is lodged in people’s hearts and their sense of wonder and imagination was something. My wife revealed that she loved Houdini. I have all these people that he occupies some very personal space in people’s hearts. It’s sort of amazing. And then that whole system, the whole spiritualist movement, what that was that this was an actual almost political party. It was huge and it started in 1840 and it gained momentum. It played off the Civil War. All these people lost all their people and that deep sort of human consciousness that needs to connect to things that we’ve lost. So to understand that in the context of our real history and then where this guy lived in real history and what he did for people, sort of actualize that American dream in a real way where it was tangible and he sort of did it before your eyes so you felt like you could do it. He’s an amazing man and I came to admire him deeply. This series touches on all of that. We’re lucky enough to get to play with those elements even though it’s not a biopic.

Q: Did you get to uncover anything that not everyone knows about Houdini?

MW: I think like you were saying that he was a Jewish immigrant. They know him as a showman but I don’t think they know him in his personal life like the storyline of him and his mom. Some people know but they don’t know. I think what’s great about a character like this is everyone sort of has an idea of Houdini but you have the opportunity to play him through great writing in a way that is personal to you and is personal to what this series is. In that, you sort of discover where Houdini lives in our time now and in people’s consciousness now.