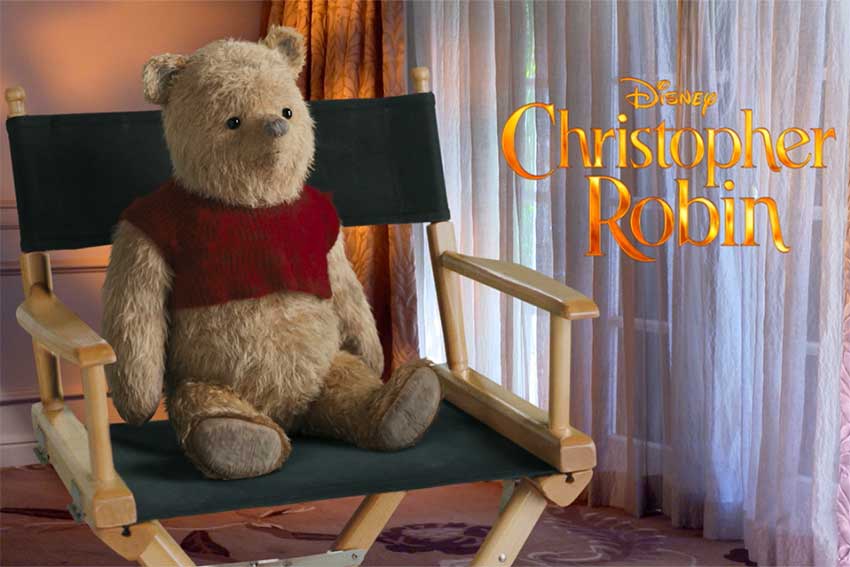 Not everyone can say they interviewed Winnie the Pooh and friends. CineMovie had the honor of talking to the adorable animal stars of CHRISTOPHER ROBIN. Winnie the Pooh and his cast of friends come to life for us in our sit down, to talk about their first live action experience and working with Ewan McGregor.

Winnie, Tigger, Pigley and Eeyore get re-animated for their big screen debut in the Disney live-action CHRISTOPHER ROBIN. The beloved characters meet a grown up Christopher Robin who has forgotten his child playing days as a stuffy executive whose priorities are work over his family.

CHRISTOPHER ROBIN, the young boy who shared countless adventures with his stuffed animal friends in the Hundred Acre Wood, is now grown up, living in midcentury London and dealing with the stresses of adulthood. As an efficiency manager at Winslow Luggage, he juggles long hours in the office with his commitments at home and has all but forgotten the endless days of wonder and make-believe that defined his childhood. But sooner or later your past catches up with you.

After canceling plans to go away with his wife, Evelyn, and daughter, Madeline, in order to work through the weekend, he is reunited with Winnie the Pooh and his old friends from the Hundred Acre Wood, remembering the times when doing nothing with a best friend was the very best kind of something. But as Christopher Robin returns to London to address financial problems at the company, some important work papers from his briefcase go missing, and the animals decide that it is up to them to save their friend.

Following a chance encounter with Madeline, Christopher’s young daughter, Pooh, Tigger, Eeyore and Piglet leave the forest and take an excursion into the city to hand-deliver the documents to the offices of Winslow Luggage, surprising Christopher Robin. As a result of their efforts, he begins to see things from a fresh perspective and comes up with a plan to save the company as well as his job, and in the process rediscovers the joys of family life, the value of friendship and remembers to appreciate the simple pleasures in life once again.

A heartwarming live-action adventure, “Christopher Robin” is directed by Golden Globe® nominee Marc Forster from a screenplay by Alex Ross Perry and Oscar® winner Tom McCarthy and Oscar nominee Allison Schroeder and a story by Greg Brooker and Mark Steven Johnson based on characters created by A.A. Milne and E.H. Shepard. The producers are Brigham Taylor, p.g.a., and Kristin Burr, p.g.a., with Renée Wolfe and Jeremy Johns serving as execu?tive producers.