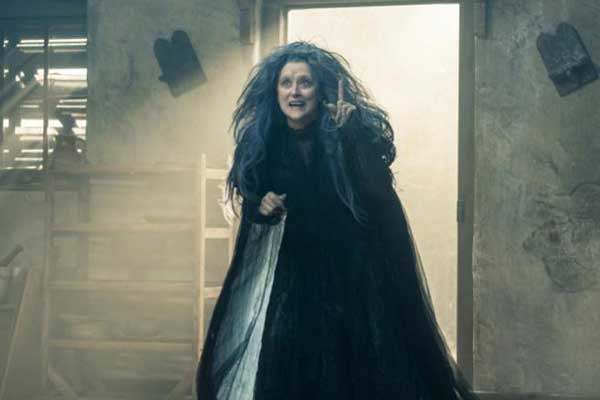 The tunes from Stephen Sondheim’s INTO THE WOODS left Meryl Streep memorized when she watched the musical years ago so when they approached her about playing the witch in the movie adaptation, it was an immediate “yes.”  The three-time Academy Award winner reveals she didn’t borrow from any of the previous performances of the witch, but admits she often steals from other male actors in past roles.

In INTO THE WOODS, a witch (Streep) promises to remove a curse if a childless baker (James Corden) and his wife (Emily Blunt) gather up magical items from classic fairy tale characters such as Cinderella (Anna Kenrick), Rapunzel (Mackenzie Mauzy), Little Red Riding Hood (Lilia Crawford) and other Brother Grimm creations.

The INTO THE WOODS star tells us in this Q&A that the music was a huge factor in playing the witch warts and all.

Q: You can obviously be choosy about roles. Why did you want this one?

Meryl Streep: [laughs] Why did they want me? I was amazed when Rob said that they were putting this together and they wanted me to be the witch. It’s a great piece of American theatre history and to imagine that we could make a film of it and I could sing this music is, as you say, a privilege.  And a high bar to come up to. I said yes, I can do this. I worked really hard to bring my voice back because I used to have a really good voice and I tried to do my exercises I remembered from Yale and all the tricks from the olden days and clearing your sinuses. [sniffs] That was the sound you heard coming down the hall. It really is good, it gets everything flowing. To serve this man, Sondheim, and his beautiful music, that was our grail. We all felt this imperative to do this as well as we possibly could.

Q: They say the Witch is the only character who never lies to get what she wants. Do you agree with this and how did it impact you in crafting the character?

MS: And what makes a woman more attractive than never lying? Now you know why we called them “witches” and “bitches”. What attracted me was the music, that was the main thing because the music is the engine through which all these stories are told and it’s like a wave you can surf. When you’re an actor and there’s no music you have to bring it all yourself, but this is like WHOOSH. I remember when I was in my only Broadway musical, sometimes you come to the theatre ten weeks in and it’s a Tuesday and you’re hungover or whatever from the day off and you just don’t feel like it. You’re up there putting on your makeup, and suddenly you hear coming from the box the overture, you hear the sound of the music and it lifts you. And this music… even Sondheim said he was so thrilled because he only heard it recorded with a 16 piece orchestra in the pit of a Broadway show. He never heard it with a 64 piece orchestra and these symphony musicians. 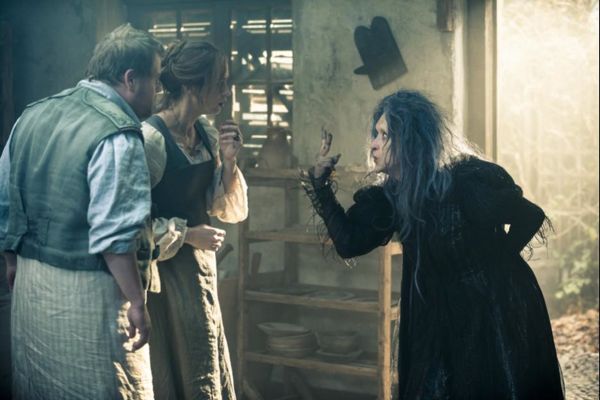 Q: How did you prepare for the role as a mother?

MS: Everybody’s storyline has something that resonates in a modern heart. The issues that the witch has, the idea that people do very bad things for good reasons, felt reasons. She loves, above everything, this little blossom of a girl that she never dreamed she’d have, and she has this child and she wants to  protect her from all the bad things in the world. That’s something every parent can understand. She takes things to an extreme, but this is a fairytale. But that resonates. Frankly would you let your daughter go off with Billy Magnussen on that wild horse? I definitely felt in singing that song, Stay With Me, “don’t you know what’s out there in the world? Someone has to shield you from that.” The other thing, which is if you raise children, you forget what age they are. You don’t literally forget, but you treat a 13 year old like she’s 10 and there’s a big difference in those three years and they can’t stand it. They want to be treated like they’re 17 when they’re 13 and you can’t help thinking of them as if they’re ten or ten months old because it’s all so recent. We overprotect sometimes.  Not that I do.

Q: What was it like preparing for your rap scene?

MS: I haven’t really done my real rap scene yet. I don’t want to show you everything. I don’t know. When Steve wrote that, did they even call it a rap then? Who were his influences? Ice Cube? Who would have been ‘87? Run DMC?

Q: The Witch sings Stay With Me then kicks Rapunzel out. What’s more important to her, Rapunzel or being right?

MS: She would say Rapunzel, but probably being right. The two things are conflated in the parental mind. Because being right means protecting her. She also makes the mistake a lot of women make which is thinking if you look beautiful you look lovable. She thinks Rapunzel won't be ashamed of her if she drinks this potion. We all make that mistake, thinking that the outside is what makes you more worthy of love.

Q: What goes through your mind when you’re offered a musical and what’s your motivation for doing it?

MS: That music is the reason to do it.

Q:  Did you listen to any previous performances?

MS:  I had seen Bernadette do the Witch 20 or 30 years ago. I remember it vividly. It was etched in my soul. Everyone said Sondheim is unsingable or too complicated, but those melodies lived in my head for years. I didn’t buy the album, but it was in my head. I wanted to just find my own inner Witch and I didn’t even think about copying. Usually I steal something from somebody. I usually steal from men because nobody notices. I remember how to meld the technique with the abandon you need and there’s certainly that in both of the big songs I sing. I found myself singing them over and over without investing because you make a lot of assumptions. You think you know this music until you really look at the sheet music and we sat with Paul Gemignani and his little rests. There’s a reason for them in Sondheim’s mind. Things that arrest you and make you listen a little harder and it’s all precise and deliberately there, so we had to be precise and exact. Then you just get rid of it and start to live through the music. I found it unbearable when I allowed the story to meet the music because with Stay With Me I got so upset. You can’t sing when you’re crying, you get congested, it’s disgusting. It’s a measure of finding a way to control the emotion, to use it, funnel it, make it ride on the sound.

Q: Did fairy tales inform your role or did you like them?

MS: I always liked The Three Little Pigs, but that’s not really a fairy tale. When my children were little we had the entire set of Shelley Duvall’s Fairy Tale Theater and you should get it. Carrie Fisher on a tiny acorn, and Chris Reeves as the handsome prince and Bernadette Peters was Sleeping Beauty. No music, but they were oddly skewed through her sensibility. The fairy tale that really scared me was Bluebeard. That’s the one where he kills these wives one after another. I thought of fairy tales as these stories women told their children to warn them, keep them safe, married up, all the things that would have safeguarded them in the olden days.