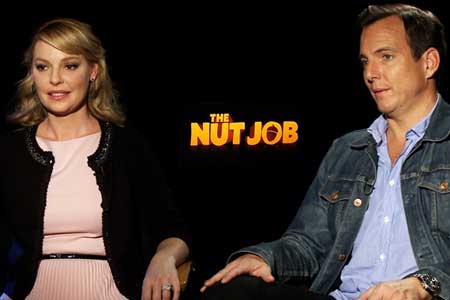 THE NUT JOB's Katherine Heigl is completely mortified that her giggling voice over session is on YouTube while Will Arnett reveals he had his own squirrel encounter with the little critter trying to break into his own house.

Katherine Heigl and Will Arnett voice the roles of talking squirrels in the new animated movie, THE NUT JOB. THE NUT JOB is Heigl's first voiceover role for an animated movie while Arnett is an old pro. CineMovie's Sue Evelyn Gil sat down with the two actors in Los Angeles where unfortunately we gave Heigl the news that her clip of her recording session for THE NUT JOB was on YouTube. As with most behind-the-scenes footage, we see Heigl at work in the recording booth, but in the video Heighl can't help but laugh after most takes.She admits that she was very self-conscious while voicing Andie the squirrel and had many giggling moments.

In THE NUT JOB, Surly (Arnett), a fearless squirrel and his critter crew, plan a heist of the Nut Factory to stock up for the winter. Will Arnett shared a story about his own encounter with a squirrel in his backyard. He says the little creature seemed to want food from him or come into the home. He resisted feeding the animal and held him at bay, but now that he's played a squirrel, he would've treated his little friend differently in retrospect.

In the animated movie, the park animals store foods for winter so of course we asked Heigl and Arnett if they could hibernate, what would they store for the chilly season?  Heigl joked she would store vodka and cheese, while Arnett's sweet tooth would definitely stock up on desserts. Sounds like a good plan.