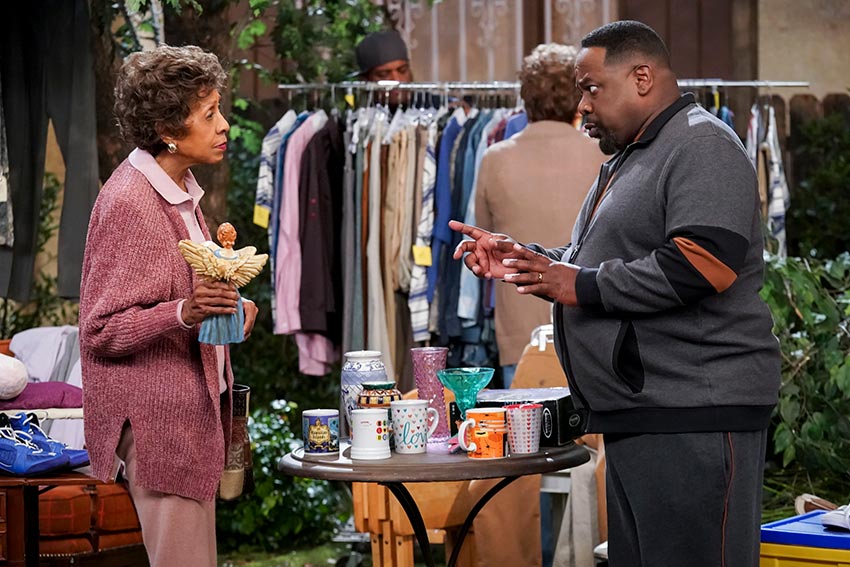 Best known as the feisty housekeeper on "The Jeffersons" or the star of "227," Marla Gibbs is still going strong and next we'll be seeing her in a guest starring role in "The Neighborhood" with Cedric the Entertainer on Monday, February 11 (8:00-8:30 PM, ET/PT). Acting since 1973, the 87-year-old actress isn't interesting in retiring any time soon.

In "The Neighborhood" Marla Gibbs guest stars alongside Cedric the Entertainer, Tichina Arnold, Max Greenfield and Beth Behrs as their neighbor Miss Simpson. Calvin holds a yard sale at Dave's (Greenfield) suggestion but Miss Simpson buys one of Calvin's prized possessions which Calvin wants back and Dave must help him get it back.

Marla Gibbs talks to CineMovie about her long career, her "Neighborhood" costars and remembering her iconic television shows.

CineMovie: For the new year, we're going to see you on "The Neighborhood."

CineMovie: Are you guest starring or reoccurring?

Gibbs: I'd like for it to be reoccurring. So we'll put that in the universe.

CineMovie: Yes, and we'll help with that. Well, congratulations on your career. I was a big fan of "The Jeffersons" growing up.

CineMovie: And that's an unforgettable character. That's for sure.

Gibbs: It was a wonderful experience that I never thought it would be running this long, but it's never stopped running, which is phenomenal.

CineMovie: Cedric told me he was a big fan of the Jeffersons and his new show has some similarities as far as the topics they're discussing. 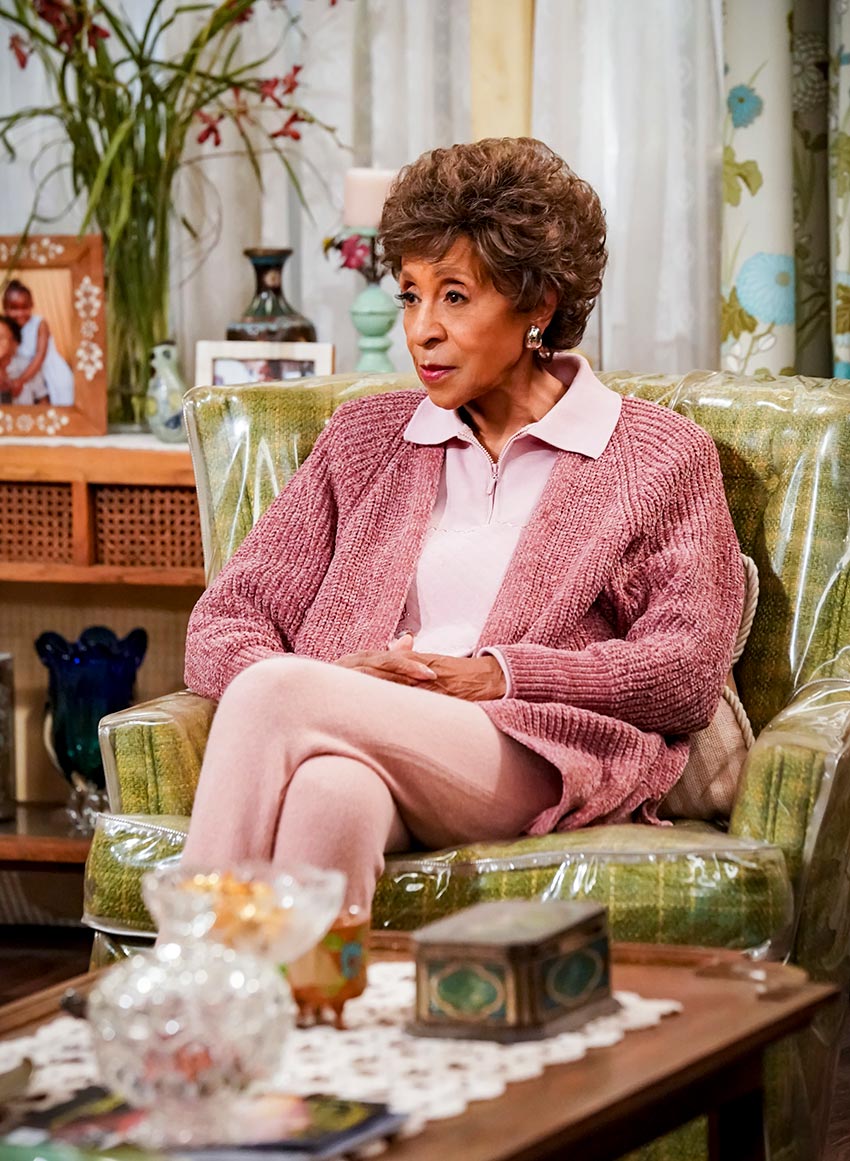 CineMovie: What do you think about the network doing a show like this again?

Gibbs: We all came up in a neighborhood and so it's very familiar and very loving. And a lot of stories from people growing up. So the neighborhood is like that. Now it's more loving and more real because now we're interacting with different people from different backgrounds and different ethnicity. But we realize we're all one.

CineMovie: Exactly. That's the point of the show, we're all the same. Can you reveal who you are playing in the show?

Gibbs: I'm Mrs Simpson. The neighbor in the neighborhood.

CineMovie: Are you a nice neighbor or feisty?

CineMovie: How was it working with Cedric and, and all these actors?

Gibbs: It was great working with Cedric. He is such a natural and Tichina Arnold, I love her. We worked together before. And watching her, I told her, ‘this is your fifth or sixth sitcom, isn't it?’ She said, ’yes.’

Gibbs: I watch her a lot. She's really good.

CineMovie: And speaking of long careers, you've been working steadily this whole time. How do you think things have changed? Or does it feel the same?

Gibbs: As much as we think they've changed, they remain the same. When you really look at it, it's the same.

CineMovie: Even with the technology, TV shows, they're still shot the same way and kind of the same routine?

CineMovie: I was reading a bit about your background. You worked, I believe, for an airlines in Detroit.

CineMovie: And they transferred you here to Los Angeles, and you decided to take on acting.

Gibbs: Yeah, I came from Detroit working with United. That was a wonderful experience. I thought I would be doing that all the time. Of course. I never wanted to retire from anything.

CineMovie: Well that's amazing. Do you ever think about it? Like what if I haven't had it been transferred to LA? Your career path would have been a lot different.

Gibbs: It's really something else that I got an opportunity to do this.

CineMovie: It was in the cards for you.

CineMovie: As far as the Jeffersons, what are some of your fondest memories from the show? I watched it but I didn't realize it ran for 10 years. That's a long time.

Gibbs: They're all wonderful. To stop and think of "The Jeffersons," it's a real family. I appreciate "227" because I got to do a little producing and writing on that and that was nice. A different experience and a wonderful cast. Regina [King] is like my real daughter. She was a little girl that plucked my nerves, but we knew she was talented right away.

CineMovie: You must be proud of her. As far as her career. I mean she's done really well.

Gibbs: I just hosted the screening of her new film, "It Beale Street Could Talk. And I told her, I said, how do you expect me to catch up with you? She's got three Emmy's and she's up for a Golden Globe. She keeps going into orbit.

Gibbs: She's wonderful. We did get to work on "Southland" together. It was so fun because they changed the name of the character when I opened the door. They changed it to Brenda which was her name on "227".

Gibbs: So that was fun. They had me call her Brenda.

CineMovie: On "The Jeffersons," could you believe that you were playing such a character, such a feisty character who talked back to the bosses?

CineMovie: Was it written like that or did you add a little more to it?

Gibbs: You always add a little more to it and of course it was such a wonderful, wonderful set that they allowed us to add things and they improvised a lot of it. We would come up with something that we thought was funny, funnier than maybe what was written and they say go with it. So we'd go with it. And so it was wonderful. People would come to guest star on a show. They said, 'we've never seen a set like this. This is so loose.' So wonderful. So we were very happy. We went to work to play every day.

CineMovie: That must have been nice. Was Norman Lear involved on the set every day?

Gibbs: No, as a matter of fact, I'd see Norman in the hallway and I say, 'you're not coming to our show.' He said, 'well, you guys don't need me.' He said, 'you want me to come?' I said yes. So he told me he would cancel where he was going and he came to the set. The producer said, ‘Norman is coming. Why? Who invited him?’ They looked at me and said, Marla. That Norman had such a gift. He could walk in and whatever the problem was, he could solve it right away. He just automatically knew. And I saw that in him. We were having a little problem and when he came in, he solved it right away.

CineMovie: Yeah, he's a genius. He was a trailblazer back in the seventies with his shows. Thanks to him, I got to see diversity on TV. Otherwise it would've been really sad. Do you still keep in touch with him?

Gibbs: Oh yeah. We do. As a matter of fact, people have been honoring him all over the place and I was at two or three of them. I went to Atlanta with him. I flew to Atlanta with him for the black college honoring him. I can't think of the name of it right at this moment, but we went in and we had a wonderful thing and some of the guests from some of the other shows were there. So that was really nice.

CineMovie: Yeah, he's amazing. I still see him around. He's still energetic and full of life.

Gibbs: Oh yeah! He'll be doing it as long as he's here.

CineMovie: We need more people like that to trail blaze.

Gibbs: I'm sure he's going to do another show. I think he's got another one in him.

CineMovie: Well, speaking of another show, how about yourself? If you were asked to do a new TV show? Would you say yes? Yes.

Gibbs: Oh, yeah! As a matter of fact, I'm reoccurring on "Station 19." I had six scheduled, but they've changed. So that's the way the writing goes. They more interested in doing the fires, I think. I'm in a nursing home so they haven't come back to the set yet.. to the nursing home set yet. That's been fun.

CineMovie: Any other shows in the works?

Gibbs: Well, I haven't seen anymore that I'm continuing in. 'The Neighborhood' of course might be one since I'm a neighbor. I could possibly be on the show again in 'The Neighborhood,' if you know what I mean.

Gibbs: Whatever it is, I'm ready.

CineMovie: Well that's great. It's really nice to see you on TV and a great seeing you throughout the years and thanks so much for talking to us.

Gibbs: As long as you are here and as long as you breathe, it's never too late on this side. The only time it's too late over here is when you are over there. You make that transition. I wouldn't be surprised if they weren't doing shows over there but I'm not anxious to find out right now.