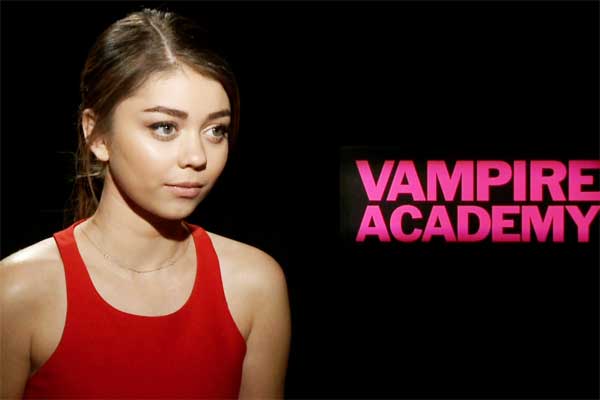 Sarah Hyland transitions from playing a self-obsessed teen in the television hit "Modern Family" to an awkward teen vampire in VAMPIRE ACADEMY, but her ideal role would be to play a crazy person a la Angelina Jolie in Girl, Interrupted.

Sarah Hyland used her hiatus from "Modern Family" last summer to work on three projects including the Mean Girls with fangs action comedy VAMPIRE ACADEMY. The 23-year-old didn't mind not having any time off. "I couldn't have been happier. I'm a workaholic. Someone should send me rehab or something," she said while promoting VAMPIRE ACADEMY in Los Angeles.

After shooting VAMPIRE ACADEMY, she went on to star and produce a film written by her friends and boyfriend. She had a ball shooting the dark comedy, which she calls a "very emotional piece" centered around a family brought together by a funeral. She tells CineMovie they are figuring out how to get the film distributed.

However an ideal role would be to play a mentally-challenged character. She admires Angelina Jolie's Academy Award-winning turn in Girl, Interrupted and hopes to one day land an equally challenging role.

Now that she's played a supernatural being in VAMPIRE ACADEMY, she wouldn't mind also playing a superhero. "A superhero would be kind of awesome," says the young star. When she was younger, Hyland was obsessed with Hermoine in the Harry Potter franchise, so anything in that vein would make her day.

The self-described workaholic says she plans to stay busy during her next hiatus as well with projects like VAMPIRE ACADEMY which she describes as a female-driven movie where "the boys are there to look pretty."