NIGHTCRAWLER’s Rene Russo on Her Character Not Being A B*** 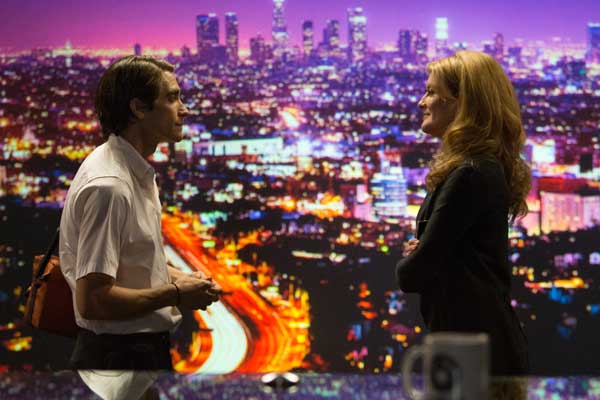 Rene Russo’s character in NIGHTCRAWLER goes beyond moral boundaries for her job, but depending on which gender you talk to - Nina is either the B-word or just desperate. Russo agrees Nina crosses the line, but she sees her actions out of fear and not maliciousness.

While making her rounds promoting NIGHTCRAWLER, Rene Russo tells CineMovie that the way people described Nina depended on whether you were male or female. Males tended to think she's a bitch while females saw her as a victim. In NIGHTCRAWLER, Russo’s Nina runs the morning newsroom at a low-rated news station in Los Angeles. Desperate to keep her job, she insists on running the sensational stories that Louis Bloom (Jake Gyllenhaal) brings her. Nina is guilty of encouraging Louis to break the law to get the story, but she’s driven out of fear, says Russo.

At first she couldn’t figure out how to play her because Nina was unlike any of her previous roles. She decided her actions were based “out of necessity” rather than ill-intent.

“I finally found a way to bring her to life, and that was through desperation. She’s afraid of losing her health insurance, her home, she’s 60 and alone. I didn’t want to judge her for that.”

Russo knows desperation. In the interview, Russo opened up about her childhood growing up with a struggling single mom. “I’m a street girl,” Russo jokes of her tough upbringing. She recalls a vivid memory when her mom was paying at a grocery store, and she didn’t have enough money for the groceries. The look of despair on her mother’s face is one that she will never forget. That defining moment in her life is when she decided she would make something of herself.

“I can relate to that,” she says of Nina’s desperation especially being a woman in an industry that tends to do away with women once they age. That’s why she is surprised to hear from male journalist that Nina is a “bitch” while most women she spoke to had a different opinion.

“It depends where you’re coming from in your life. The job market is so F’d up out there.”

Russo doesn’t deny that Nina compromised herself and crossed moral boundaries, but she doesn’t quite see her as despicable. When asked if she had any basis for the character, she replied that she partially based it on herself. She quickly joked, “I’m not a horrible person. Don’t judge me.” In her personal life, here have been times she was tempted to cross the line, but didn’t. Those “almost moments” inspired the character.