O'Shea Jackson Jr.'s Dad Ice Cube Was Jealous Of His Son’s Role in 'Godzilla: King of the Monsters' 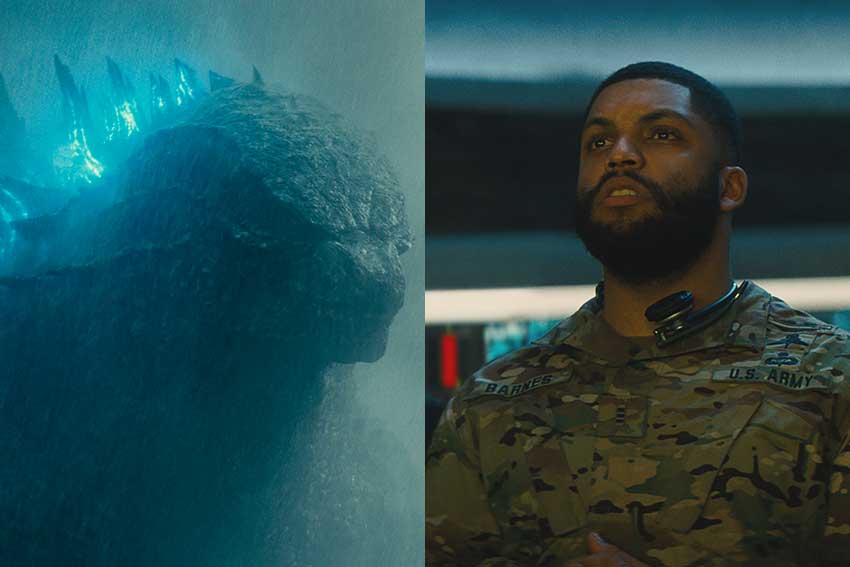 Starring in GODZILLA: KING OF THE MONSTERS isn't just a paycheck for O'Shea Jackon Jr., but a geek out moment for the die hard Godzilla fan. Ice Cube's son grew up watching Godzilla movies alongside his famous father. When Junior got the role in the new GODZILLA movie, the rapper turned actor was excited for his son, but couldn't help and feel a bit jealous. The GODZILLA: KING OF THE MONSTERS star tells CineMovie what happened next and why he never imagined he'd star in a monster movie because he didn't intend to become an actor until STRAIGHT OUTTA COMPTON.

CineMovie: When you were dreaming about being an actor, was it in your mind that you gotta be in a monster movie?

Jackson: No. Honestly, I wanted to be a writer. I'm really into having my privacy so I didn't want to be in front of the camera. I want to be behind the camera because I just saw the way my dad had to maneuver throughout his life, being a person in front of the camera. And STRAIGHT OUT OF COMPTON happened And it wasn't about getting into acting. I just know if somebody cemented my father's legacy and it wasn't exactly how I felt it was supposed to be, it would have made me upset. I would've been angry with myself. Yeah, so I had to do that. And then afterwards it was, 'well of course he could play his dad' and it was like 'Ouch!,' It just kind of diminished everything that I went through, the two years of training, and I left college to really focus on acting. And then after that it was just like, all right, well let's just show them what we can do. And it was just about getting roles that are night and day from each other, that you can't just put me into one box and now they're like, 'Yo, you're pretty good.' And so it's like, let's keep it going.

CineMovie: Not only did it launch your career but funny enough, Corey and Jason are in KONG: SKULL ISLAND. It's a Compton monster mash.

CineMovie: I like your outlook on your career, knowing that you have to diversify your roles.

Jackson: Yeah. You can't let them typecast you because if you give them the opportunity, they will.

CineMovie: I'm sure you've been offered roles that you were like, "really?"

Jackson: Yeah. It's just like, all right, you can't just take everything. You gotta be smart. You got to strategize because at the end of the day, when they see that resume, when they start to see who you've played with, who you've been in scenes with, and things like that, it gets certain eyes on you. You could do STRAIGHT OUTTA COMPTON, and it was critically acclaimed and all that, but then when you do the indie afterwards, and it goes to Sundance, it puts new eyes on you. When you do act in an action film now with Gerard Butler, you got new eyes on you. Then when you're next to Charlize and Seth, it's got new eyes on you and now Godzilla is worldwide. So that's the most eyes I'm going to get on me. So it's just about being smart, not letting them put you in nothing cliche. Avoid the cliche. That is the biggest goal.

CineMovie: You mentioned you grew up watching the Godzilla movies with your dad, right?

CineMovie: So when you told him that, 'Hey, I'm going to be in the Godzilla movie, what was his reaction?

Jackson: I could see in his face he was, 'Hmm, well that's cool.' I understand that Godzilla is a key part of our household, but I feel like that was the first moment where my dad was like, 'how the hell did he get Godzilla?’ It was a little bit like.. he had to call the agency, see what's going on with that. And then all of a sudden he's at my agency so it was like.. 'Yeah, yeah. I'm making, making some dope moves out here, Pop pop. So it's been cool. He knows I'm living the dream. He tells me I was born to play in STRAIGHT OUTTA COMPTON and Godzilla was the second. He and my mom, they are my support team and they know that this has been years in the making. I met Godzilla when I was five, six. So this is over 20 years in the making through my dad and my older brother Darrell showing me on the SyFy network.

CineMovie: Like the original movies, they set up the fact that Godzilla could be bad as well.

Jackson: God, that broke my heart. For now, I was like, 'aww!' As a kid, Godzilla, whenever humans are being attacked by some random kaiju, Godzilla's the world's Dad. He's like, 'hold on now' and he makes sure everything is all right. Yeah, some buildings get knocked down because that's where the fight is. I don't really care about these buildings. Y'All put these here. Afterwards he goes back into the ocean, minds his business. That sounds like a protector. I never looked at Godzilla as threatening us or wanting to destroy us because he could have done it a long time ago.

CineMovie: What other monsters not in this film, would you like to see Godzilla take on... like Mechagodzilla...

Jackson: Mechagodzilla for sure. That would be probably number one just because that's the one I can visually see how they could do it. Number two, my most feared Godzilla villain is Gigan because that guy with the hooks and the buzzsaw... that was the bloodiest Godzilla movie I'd ever seen as a kid. I was like, 'wow, Godzilla is dead. He's not making it.' So yeah, for sure those two, and after that... they would have to build a bit of a storyline and I just don't think they're ready for the whole son of Godzilla thing that they put us through...smoke rings. We're not ready for that just yet. But yeah, Gigan and Mechagodzilla for sure.

CineMovie: So as a fan watching the movie, not the actor, what part did you geek out on? For me it was the music.

Jackson: Music is everything. Bum, bum, bum, bum, bum, bum, bum, bum, bum. It's just so much going on... when he comes out the water, Rodan's entrance. Whew! Rodan, I think had the top entrance of the monsters followed by Mothra. When she finally awakens, it's like... you get chills. And it's just like you're in awe and that's what it's supposed to be. The movies that I love and grew up with, those are practical effects. And when times change, so do the arts. They have to adapt a little bit. I feel that Godzilla is well adapted now.

CineMovie: You want to go behind the scenes and work on anime and maybe get the video genre adaptation right? So any big plans?

Jackson: Right now I'm just carefully planting the seeds through the media so I can get somebody to then want to have a meeting with you. I have a couple ideas to mix hip hop culture with anime because there's so many of us that love anime. We've been a part of it from Cowboy Bebop. I used to watch Yu Yu Hakusho when I was younger, Tenchi Muyo but the king has always been Dragon Ball Z. I wish they would remake the Guyver movie. I would love to play Guyver. It's just so many, so many black people are connected to anime and we always have been. But there's a piece of me that's like, yeah, I love Dragonball Z. Dragonball Z is literally... I'm going to credit it for 60% of the confidence in my life because of Dragonball Z. Goku fears nothing. And even if he thinks he's going to lose, you're not going to see me sweat. And that's important. And at the same time, I think the black character in Dragonball Z is Piccolo. There's nobody that's necessarily for you, but at the same time you feel that connection and I just wanted to kinda of touch on that a little bit and give us somebody to root for.

For now Jackson is not part of GODZILLA VS. KONG, and he is sad about that but hopefully something will change. GODZILLA: KING OF THE MONSTERS is now playing in movie theaters.