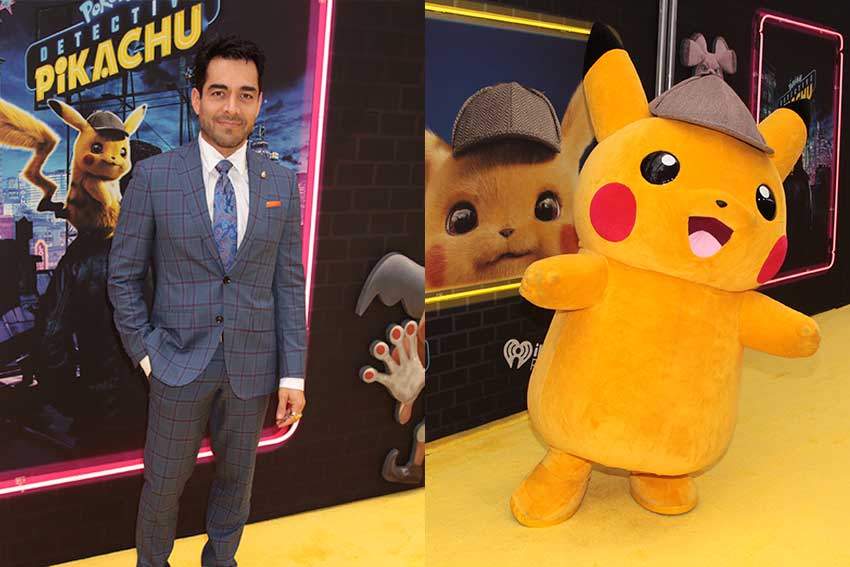 Omar Chaparro is a Pokemon trainer to the fire-breathing dragon Charizard in POKEMON: DETECTIVE  PIKACHU. We caught up with the Mexican actor to talk about his first role in a major Hollywood movie.

POKEMON: DETECTIVE PIKACHU opens Friday in movie theaters. The film stars Justice Smith (JURASSIC WORLD: FALLEN KINGDOM) and Ryan Reynolds as the voice of the adorable Pikachu. Based on the Japanese video game and anime series, it is the first live-action movie based on the game.

The Mexican actor plays Sebastian, a former pop icon who moonlights as a Pokemon trainer for Charizard. and owner of an underground fight club for the critters. As most adults, Chaparro didn't have much knowledge of the phenomena that is the Pokemon world so he consulted with his young son and handed him the script to review. Suffice it to say, his son became his personal consultant he tells us in our interview with him below.

In Ryme City, a metropolis populated between the bonds of humans and Pokémon alike, a 21-year-old former Pokémon trainer named Tim Goodman comes into contact with a talking Pikachu that once belonged to his father, Harry Goodman, who went missing after an accident. Tim and the talking Pikachu, who calls himself "Detective Pikachu", investigate to find his whereabouts with the help of a reporter, Lucy Stevens, and her Psyduck, until they come across something that endangers the Pokémon world.