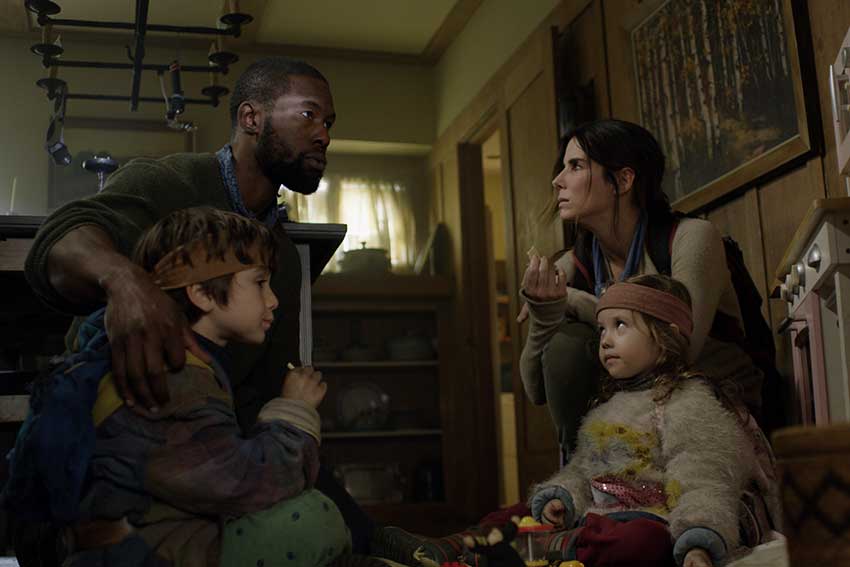 Sandra Bullock must survive the apocalypse with two 5-year-old children in BIRD BOX. Not only was it challenging for all the actors to walk around blind-folded, but Bullock also had to yell at her young costars. Bullock and director Susanne Bier talk about how they prepared the tiny actors to react to Bullock's stern instructions in the film.

BIRD BOX hits movie theaters December 14, and starts streaming on Netflix December 21. Sandra Bullock is not your average mother figure in BIRD BOX with her tough love approach with the two children, played by Julian Edwards and Vivien Lyra Blair. CineMovie asked the star and director how they handled the children on set and how they prepared them for the grim task of playing characters in the apocalypse. Listen below.

When a mysterious force decimates the world’s population, only one thing is certain: if you see it, you take your life. Facing the unknown, Malorie finds love, hope and a new beginning only for it to unravel. Now she must flee with her two children down a treacherous river to the one place left that may offer sanctuary. But to survive, they'll have to undertake the perilous two-day journey blindfolded. Academy Award® winner Sandra Bullock leads an all-star cast that includes Trevante Rhodes, with Sarah Paulson, and John Malkovich in Bird Box, a compelling new thriller from Academy Award® winner Susanne Bier.

At the core of this unique, nerve-shattering thriller is a mother’s battle to overcome seemingly insurmountable odds: to save two children from an absolutely unknowable threat—a threat that once seen, cannot be survived. Academy Award winner Sandra Bullock leads a powerful ensemble cast—including Trevante Rhodes, Jacki Weaver, Rosa Salazar, Danielle Macdonald, Lil Rel Howery, Tom Hollander, Colson Baker, BD Wong, Sarah Paulson and John Malkovich—into a world suddenly plunged into total fear and overwhelming mistrust among the only people who remain alive, unscathed…yet cut off from sight. As the artist and soon-to-be-single-mother Malorie, Bullock portrays a woman who must push beyond her physical, psychological and spiritual limits to keep herself from succumbing to the temptation to look into the face of the omnipresent threat—as she finds the love and strength to protect two children.