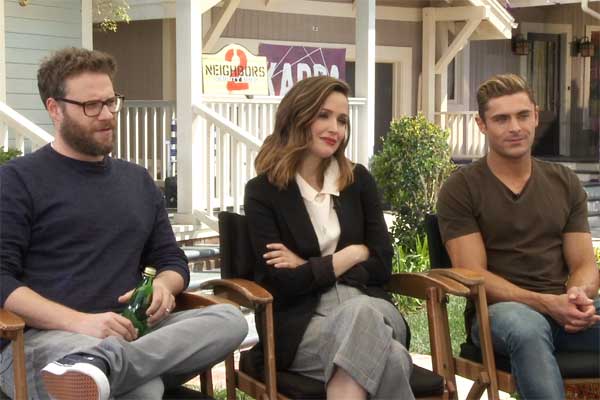 As the star, producer and one of 5 writers on the NEIGHBORS 2: SORORITY RISING, Seth Rogen and his production team felt the pressure to deliver a worthy sequel. According to Rogen and director/partner Nicholas Stoller, their worst fear was making a “terrible” follow up. Their thoughful efforts payed off. Listen to interview below.

The NEIGHBORS sequel has accomplished something rare in Hollywood. Sequels often pale in comparison to the original film, but NEIGHBORS 2: SORORITY RISING is much funnier than the first film, and the characters are much more relatable and honest.

In NEIGHBORS 2: SORORITY RISING, Mac (Rogen) and Kelly (Byrne) are expecting a second child, and looking to sell their home, however when they go into escrow, a sorority moves in next door jeopardizing the sale. They enlist their former neighbor, Teddy (Efron) to help oust the party girls.

While promoting NEIGHBORS 2: SORORITY RISING in Los Angeles, Seth Rogen, Rose Byrne, Zac Efron and director Nicholas Stoller talked about revisiting the characters from NEIGHBORS and whether they knew during production that they were making a worthy sequel.

Rose Byrne who reprises her role as Kelly Radner tells CineMovie you can’t predict the outcome when you’re on the set. Her on-screen husband Seth Rogen learned the hard way that having a good time on the set didn’t always turn out for the best on film.  “I’ve made a lot of things that seemed funnier, but they were NOT,” notes the NEIGHBORS 2 star.

“None of us have made a sequel....none of the people writing the movie, and so we REALLY just tried to put a ton of thought on how NOT to make it terrible. And how to make it feel like we were justifying its own existence idea-wise essentially, and we really tried to make sure it had an idea that is strong enough that even if there was no first movie.. we would be excited about this as an idea for a movie.”

The “guiding principle” when writing the script was centered on the characters and where they were headed in the next chapter of their lives. Keeping that in mind, “made everything easier, says Rogen.

Director Nicholas Stoller also felt the pressure of writing the characters as “emotionally honest” as possible specifically when it came to the new female characters played by Chloe Grace Moretz, Kiersey Clemons and Beanie Feldstein. The women of the sorority are going through an identity crisis much in the same way as Zac Efron’s character in the original. However, the early draft written by Stoller, Rogen and three other male writers, according to Stoller, was much different than the final production script.

“There’s nothing more annoying when girls talk just like guys. We wanted to make sure it all makes sense.”

Stoller says two female writers were brought on set to bring a more honest approach to the women’s roles, and he consulted the young actresses about the vernacular and actions of college-aged students.  The result of their hard work paid off with a very entertaining follow-up to NEIGHBORS.

Listen below to Seth Rogen speak on their writing process.