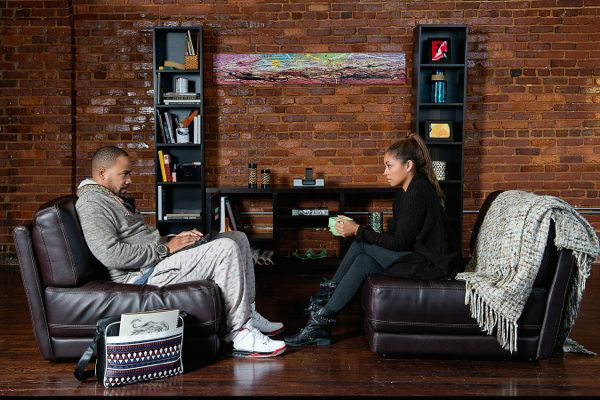 Former “Scandal” star Columbus Short and his estranged wife Tanee McCall-Short ironically star in the short film THE END AGAIN in which their characters break up. In a case of life imitating art, the real-life couple made headlines when Tanee filed for divorce from her husband Columbus last spring amidst his well-publicized troubles.  Tanee McCall-short reveals exclusively to CineMovie that during the making of the film, she was contemplating leaving the relationship and knew full well how her onscreen character felt.

In THE END AGAIN, the Shorts portray Joe and Jane, a couple separating after five years together. Jane has mixed emotions as she packs up her things while Joe mopes around mourning the loss. Walking away isn’t as easy as she reminisces over the good and the bad memories triggered by items around their home. (Watch short below)  THE END AGAIN director Crystle E. Roberson and the production are currently seeking funding via Indiegogo for a full length feature titled OPENENDED that would follow the couple in the aftermath of their breakup as they meet up during a funeral.

There’s not much dialogue between Joe and Jane, but the pain of their breakup comes across through their emotions. For Tanee McCall-Short, she didn’t have to look far for inspiration. The premise of the short film wasn’t too far off from her personal life when they went into production in January of 2014.

“It was kind of easy to put myself in that position. In my personal life I was already in that kind of state of mind trying to make a decision, ‘do I stay or do I go?’ So all that was readily available to me. I put myself on tape and it was already written very well. There’s not a lot of dialogue which can be tricky. You have to convey your emotions through your body language. I was already in that kind of state anyway where I was sad knowing that I had to move forward. I just tapped into reality.”

Months after the couples real-life drama surfaced, McCall-Short isn’t shying away from promoting the film starring her ex. The actress tells us she watched it for the first time three weeks ago, and surprisingly felt good about it. “It was easy for me to watch. I still cried, but I loved the short, says McCall-Short. Although she’s still in the process of healing from the real-life break-up, she’s proud of THE END AGAIN and will continue helping the filmmakers get the feature film made through crowd-funding site Indiegogo.com.

“It’s really important for us to get behind it,” she adds. “There aren’t enough of us on screen especially depicted in normal everyday things that happen.”

When it comes to the depiction of African-Americans and other minorities on television and at the movies, she sees a big problem in the lack of representation. While new fall shows like “How To Get Away with Murder,” “Black-ish,” “Jane the Virgin” and “Cristela” feature minorities in the lead, McCall-Short thinks it’s not enough.

“There’s still a bigger problem in the lack of representation and the fact that we have to applaud that there’s even a handful of shows on screen - just tells you we are not where we should be so hopefully one day… Shonda [Rhimes] definitely helps in that aspect - the colorless lines that she has and putting people of color in it. You don’t have to write a script about the person of color.”

While “Scandal’s” Kerry Washington opened doors for actresses like herself, McCall-Short says being a double minority is tough. “There’s not a lot of castings out there for us,” she says which is why she thinks it’s important to get the word out about THE END AGAIN, and get the feature film funded with help from the public. (Go to Indiegogo to support the film.)

If the film OPENENDED is funded, is she open to reprising her role as Jane? “Of course that would be ideal for me,” says the actress if they’d ask. Even if she didn’t return as the character in the feature, she would support the film and buy a ticket. “I’d still get behind it. If one of us wins, we all win. I really believe that.” she added.

McCall believes in the cause so much that she took the helm behind the camera to direct a write and produce film in 2008, and she’s had a few of her own scripts optioned, but first, she says she’s rebuilding her life after the breakup with Columbus Short, and hopes to return to producing and acting once she gets “back on the bandwagon.”

If you’d like to help fund the feature film OPENENDED, go to https://www.indiegogo.com/projects/what-s-after-the-end-again-let-s-make-openended and contribute. Their goal is to reach $15,000 and the campaign ends November 4th. Contribute now.