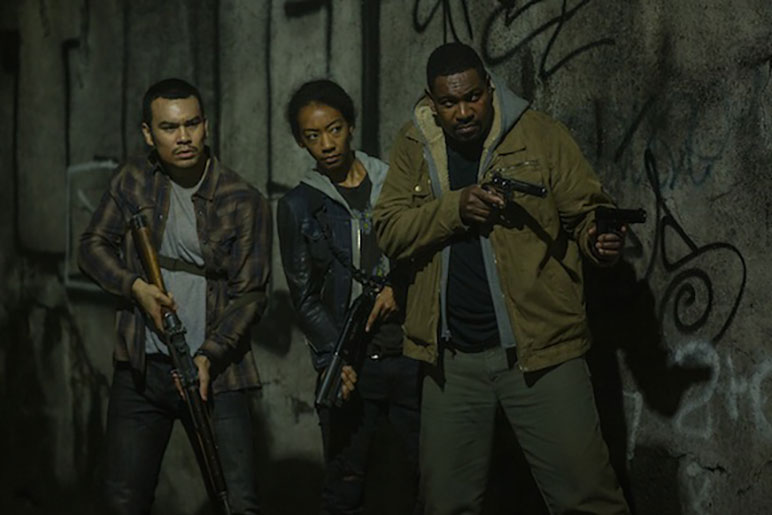 When someone says THE PURGE: ELECTION YEAR, they're not referring to Donald Trump's campaign slogan. The third movie in THE PURGE franchise is now on home release, and one of the stars Joseph Julian Soria is talking about signing on to the series after being a big fan, and why he never imagined how timely the movie would be.

Joseph Julian Soria joins Frank Grillo in the third Purge movie, ELECTION YEAR playing a young man looking for a better life as an immigrant until the annual purge threatens his American dream. The Los Angeles native (El Sereno) and horror film buff tells CineMovie he was a big fan of the first THE PURGE and names Anarchy as his favorite one of the two.

The production took him to Providence, Rhode Island for the night time shoots. Soria joked the location was a chilly one for “this L.A. boy,” but he enjoyed the clean, crisp smog-free air. While some actors and crew admit going a little stir crazy because of the lack of sleep with overnight shoots, Soria has no complaints of his time on the set.

“I’m very passionate about my work. I’m a half-cup, half-full kind of guy with my mindset, says the actor.  “So I could’ve been beaten up and there would’ve been no other place I would’ve been.”

Soria primarily worked with Mikelti Williamson (HEAT, FORREST GUMP), who plays a father figure on camera and off.  He gravitated to the actor immediately.

“It’s just my nature to get under his wing and learn from him in regards to the business for myself and anytime he spoke I listened. He’s naturally a mentor of sorts. I definitely have lots of love for that guy.” 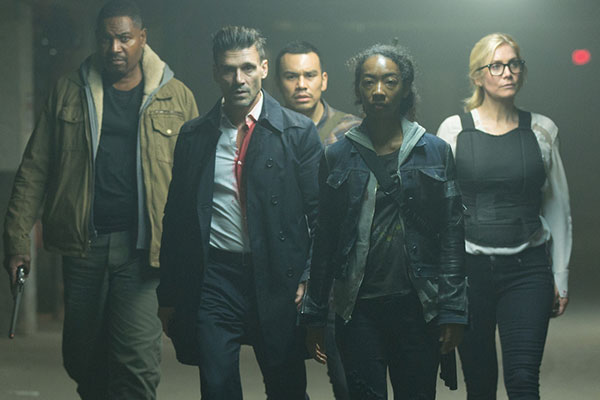 He can reveal Frank Grillo was equally impressive, full of energy and a “guy’s guy” in every sense of the word. He explains Frank would work “very hard” on set, meticulously going through the script and breaking down the material. and also dedicate his time in the gym.

When he read the script for THE PURGE: ELECTION YEAR, he immediately connected with the players from the story. While THE PURGE franchise falls into the horror genre, the franchice often reflects reality with commentary on class struggle. For ELECTION YEAR, the premise hits close to home as a female Presidential candidate is targeted by the opposition and elitist political group The Founding Fathers, who are looking to purge the country of its lesser citizens to make America great again. Sound familiar?

THE PURGE: ELECTION YEAR eerily mimics the madness that is the 2016 Presidential race minus the murder (not yet at least). A female Presidential candidate running against a tyrannical and racist Republican would have been considered a far-fetched idea even for a movie. THE PURGE: ELECTION YEAR director and writer James DeMonaco couldn’t have possibly foreseen the future, but they certainly had the right idea when they planned the release date prior to writing the script.

“I have no words. It’s so ironic,” says Soria about art imitating life. “This story you couldn’t write any better. They had a release date before the movie was written. How everything played out. Are you freakin’ kidding me? That’s so ironic.”

Immigration is a hot button issue in the current election, and that topic is reflected in the Marco character played by Soria in THE PURGE: ELECTION YEAR. In the film, Soria’s Marco character is written and performed in an honest manner with a rich backstory of an immigrant who escaped the violent civil war in El Salvador for the American dream. Syria tells CineMovie the role was pretty well-fleshed out on the script from what he can remember with his questionable memory, but DeMonaco was open to suggestions.

“We definitely collaborated on it. I just gave my take on it,” he recalls. “I believe I did come up with backstory.”

He stresses that movie-making is a team effort, and it takes a village to bring a movie to fruition.

Given the eery similarity of the film to the current political climate, Soria has his opinion on the political and social scene.

“This whole election year, in my opinion, has been such a reality show. That’s a performance. I can’t take it seriously. I mean I’m taking it seriously. My vote matters, I will be there when it comes time to go to the ballot box, but this election feels like a joke.”

Next up for Soria is an appearance on FOX’s “Rosewood” and secret project that involves a video game. Other than that, Soria is constantly on the lookout of his next job.