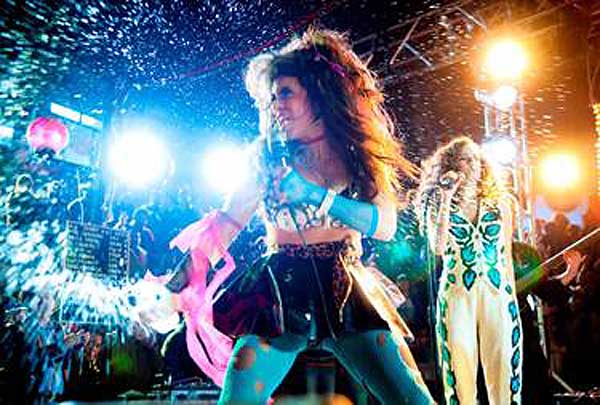 The controversial Mexican pop star Gloria Trevi is getting the big screen treatment for a biopic based on her tumultuous life and career.  For the U.S., Picturehouse will be releasing GLORIA from Mexican production company Río Negro.

Sofia Espinosa portrays the iconic singer in the musical drama which chronicles her rise to fame in the 80s  and 90s with her then husband Sergio Andrade, and her downfall in 2000. GLORIA of course will feature many hits from the “Mexican Madonna.”

More about the acquisition of GLORIA in the newly released official announcement below:

NEW YORK—Oct. 6, 2014--Picturehouse has acquired all U.S. rights to GLORIA, the biopic based on the true story of Latin America’s most controversial pop-rock icon, Gloria Trevi, from Matthias Ehrenberg of Río Negro, and plans a first quarter 2015 release.

GLORIA has also been acquired by Universal Pictures International for release in Mexico and Latin America.  The film will have a broad release in those territories in early January 2015.

GLORIA is a bold and compelling musical drama told through the lens of the provocative, socio-politically charged music that made her famous.  Often referred to as the “Mexican Madonna” and called the “Supreme Diva of Mexican Pop” by VH1, Trevi has sold more than 20 million records and is currently again on top of all the charts.

The film traces Trevi’s ascent to stardom in the ‘80s and ‘90s with her manager and then husband Sergio Andrade, never shying away from their destructive relationship or his abusive sexual behavior and its consequences. It also chronicles her astounding fall from grace in 2000 when she was accused of running a sex cult and thrown in jail to her triumphant acquittal and release in 2004.

“Gloria Trevi’s meteoric rise to stardom and astounding downfall is vividly portrayed in this riveting film about love, fame and betrayal,” says Picturehouse CEO Bob Berney. “We are excited to work with Matthias and his team at Río Negro to bring this film to audiences across the US.”

Written by one of Mexico’s top screenwriters and playwrights, Sabina Berman (BACKYARD, PANCHO VILLA AND A NAKED WOMAN), the film was directed by first timer Christian Keller, who chased down the Trevi’s life rights and has been developing her story since 2005.

“It’s a story about redemption, love and unlove, and how one can lose control of things; it doesn’t intend to scandalize, but it certainly doesn’t hide what happened,” says Río Negro’s founder Matthias Ehrenberg.  “Christian has delivered a very powerful movie, well-conceived and well-directed.”

Sofia Espinosa explodes on the screen in the title role, performing some of Trevi’s most beloved hits, including her first Number One hit, “Dr. Psiquiatra,” from 1989.  Marco Perez (AMORES PERROS, TRADE, BACKYARD) delivers a tour-de-force performance as Sergio Andrade whose rise on the back of Gloria´s success unleashes his most destructive sexual demons and ultimately brings them both down.

The film was made with a top notch team of filmmakers, including producers Matthias Ehrenberg (ITS NOT YOU, ITS ME, THE OTHER FAMILY, BEFORE NIGHT FALLS, CHANCE), Barrie M. Osborne (THE GREAT GATSBY, THE LORD OF THE RINGS Trilogy) and Alan B. Curtiss (MASTER AND COMMANDER, THE PRESTIGE), Director of Photography Martin Boege (INSTRUCTIONS NOT INCLUDED, THE VIOLIN) and editor Patricia Rommel (THE LIVES OF OTHERS).

ABOUT PICTUREHOUSE
Picturehouse, a New York-based independent film marketing and Distribution Company, reopened its doors with founder Bob Berney at the helm in 2013.  The company is currently releasing Adam Wingard’s THE GUEST and released METALLICA THROUGH THE NEVER in IMAX.  Follow us on Twitter @PicturehouseUS , facebook.com/picturehouseUS , picturehouse.com .

ABOUT RÍO NEGRO
Río Negro is a film production company based in Mexico City that produces quality cinema for the Latin American and International markets.  Established in 2000 by Matthias Ehrenberg, the company has produced over 20 successful movies, many which have broken BO records in contrives like Mexico, Brazil, Colombia and some that have gained international recognition.