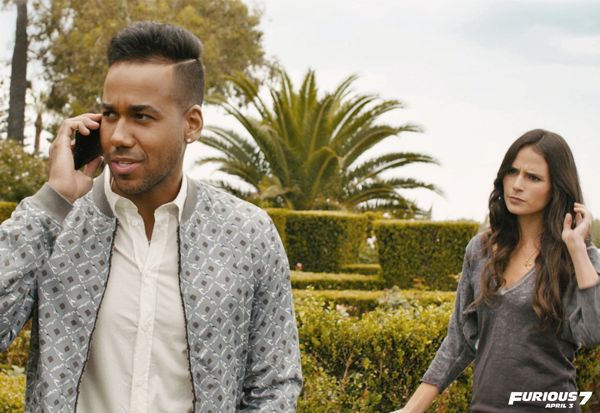 Musical artist Romeo Santos released the first image of his cameo in FURIOUS 7 Saturday in which he's featured with Jordana Brewster. It's unclear who he's playing in the seventh installment of the Fast & Furious franchise, but perhaps he's joining the crew like his previous musical predecessors turned actors.

Romeo Santos released his first look at his acting debut in the movie through his social networks. The trend seems to be growing in which the actor and not the movie studio releases exclusive material from movies on their social networks like Facebook, Instagram and Twitter. Marvel employed the Avengers, for example, to premiere their character movie posters.

Vin Diesel announced the casting during one of Romeo Santos' sold out concert in 2014 at the Staples Center in Los Angeles and sealed the deal by shaking hands on stage. Romeo Santos popularized Bachata music which originated in the Dominican Republic. Santos went solo after a successful career as a member of Aventura.

Vin Diesel also brought in Reggaeton artists Tego Calderon and Don Omar to the "Fast & Furious" franchise to help draw in more Latinos, and it's payed off with Latinos making up the majority of moviegoers for the series.

Santos joins other newcomers to the franchise with Jason Statham and Kurt Russell also feeling the need for speed along with returning favorites such as the late Paul Walker, Michelle Rodriguez, Jordana Brewster, Dwayne Johnson, Tyrese Gibson and Ludacris. FAST & FURIOUS 7 opens April 10, 2015.

James Wan on Making Next FAST AND FURIOUS Sequel