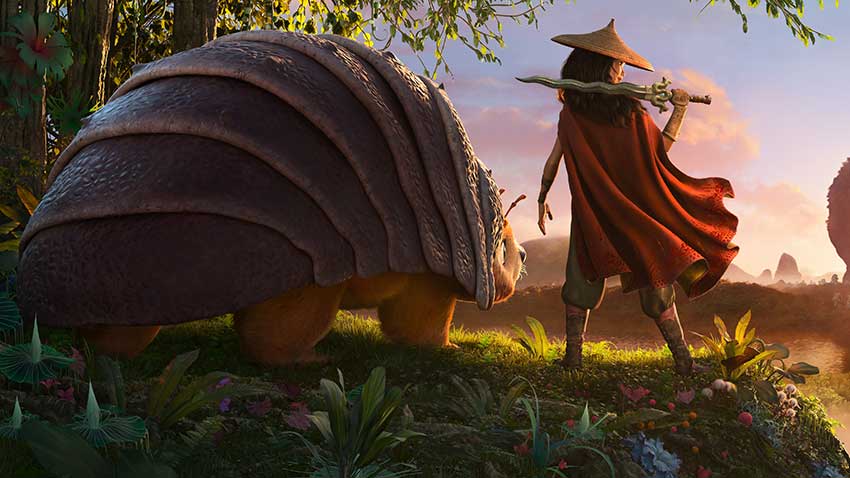 Walt Disney Animation Studios’ next flick RAYA AND THE LAST DRAGON opens in theaters March 12, 2021, but seven months out from the release - Disney announced the lead has been recast with Kelly Marie Tran (STAR WARS: THE LAST JEDI) voicing Raya along with two additional directors. Disney veteran Don Hall (BIG HERO 6, MOANA) and newcomer Carlos López Estrada (BLINDSPOTTING) were also announced as new directors along with the original directors getting co-director credit.

Disney dropped the first look at warrior Raya and her trusty sidekick Tuk Tuk in late August along with the news of the shake-up in the director’s chair and the lead. While the news came as a surprise, no doubt the new replacements have been hard at work given the deadline.

Carlos López Estrada is the only second Mexican-American filmmaker to helm a Disney animated film. Disney veteran Adrian Molina co-directed Pixar’s COCO along with Lee Unkrich. Estrada, a former music video director, was added to the Disney roster in 2019 in an effort to diversify filmmakers for their slate of films. The Mexican-born filmmaker was tapped to direct a remake of ROBIN HOOD for Disney+ last year.

Estrada will be directing with Hall, a Disney lifer who’s delivered hits such as MOANA and BIG HERO 6. The original directors, Paul Briggs and John Ripa, are still credited on the film.

Awkwafina remains on the project voicing the dragon, Sisu. RAYA AND THE LAST DRAGON takes place in the fantasy world of Kumandra where human and dragons lived in harmony until the dragons sacrificed themselves to save humanity from the sinister monsters known as the Druun. Now, 500 years later, the Druun are back and lone warrior, Raya, must find the last remaining dragon to stop the Druun from destroying humanity. Along the way, Raya learns that dragon magic isn’t the only way to save the world - it’s going to take trust as well.