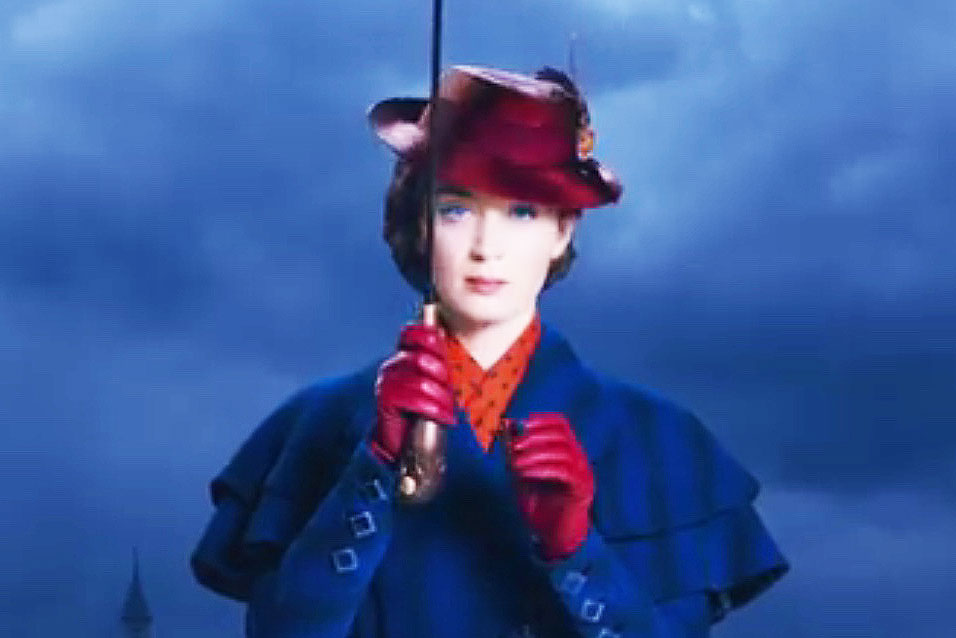 MARY POPPINS RETURNS star Emily Blunt and director Rob Marshall took to the D23 Expo stage in Anaheim to talk about the Disney film for the first time. Blunt describes her character as more "acerbic" and closer to the book version of Mary Poppins. She recognizes she can never outdo or compete with Julie Andrews portrayal so she wants to make it her own.  Disney also presented exclusive footage from the sequel accompanied by a live orchestra. The studio also released a motion poster. See it belwo.

Emily Blunt is Mary Poppins from Disney’s original musical MARY POPPINS RETURNS, in an all-new sequel to the 1964 “Mary Poppins” which features a fresh sensibility while celebrating the spirit of the original.

Blunt took to the stage at the D23 Expo in Anaheim Saturday morning, joining director/producer Rob Marshall to talk about the eagerly-anticipated return of the enigmatic nanny, where Blunt offered insight as to how she made the character her own. “I needed to try to pay homage to Julie Andrews but carve out a new space for myself. And we were very loyal to the books,” said Blunt. Marshall shared, “I was incredibly honored to be approached by Disney about directing a sequel. This is a brand new original film musical from top to bottom, which is very rare, and it is a wonderful opportunity to create something specifically for the screen.”

Marshall said they wrapped recently, but they prepared scenes for the movie for the Disney fan convention. Blunt was eager to watch as well as she has not seen any footage yet. In a grandiose way, scenes from the movie were presentd with a live orchestra playing over it. The exclusive footage included a shot of Poppins descending from the clouds in her signature garb. We also see Dick Van Dyke dancing, Meryl Streep as Topsy, Lin-Manuel Miranda, Colin Firth, and Angela Landsbury, Emily Mortimer as Jane Banks and Ben Whishaw as Michael Whishaw. In one clip, Jane and Michael are questioning that the events they experienced as children as Poppins ascends up the stairs using magic. When the dancing started, I'll admit a few tears were shed.

The MARY POPPINS sequel is scheduled to hit theaters Dec. 25, 2018