PLANET OF THE HUMANS caused quite a stir, and opponents of the movie censored the film with take downs, but PEN America, the liberties organization for writers and artists stepped in. Ultimately the stir caused more people to have interest in it.

Now more exposure will come from the free extended release. 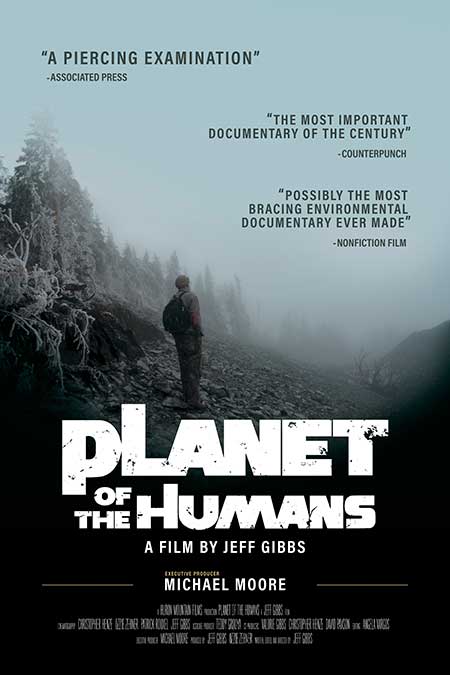 NEW YORK, NY (Tuesday, May 19, 2020) — One of the most-watched and talked-about documentaries of the year has now posted over eight million views on Michael Moore’s Rumble Media YouTube channel — in less than four weeks.

Planet of the Humans is a powerful examination of how so-called “green capitalists” have “taken over our beloved environmental movement and are causing us to lose the battle to stop the meltdown of our earthly life support systems,” according to the film’s writer and director, Jeff Gibbs. “Our movie has captured the attention of the nation and created desperately needed discussion.”

Today, Oscar®-winner Michael Moore, the film’s executive producer and distributor (via his company Rumble Media), announced that Planet of the Humans, which he and the filmmakers made available for free to the public four weeks ago, have decided to extend the free access for another month through the end of June.

The filmmakers also released a new teachers guide for educators worldwide, expanding on the film's work to engage in a conversation about the future of the planet and the environmental movement.

“Due to the overwhelming positive response and millions of viewings, we are going to continue to make the film available to the public, free of charge to the worldwide audience,” said Moore. “This movie needs to be seen by literally everyone who cares about this planet. Anyone who sees this movie will want to immediately join the fight or redouble their efforts to find real solutions to protect life on earth, as opposed to backing those who’ve chosen methods that are too little, too late— or have the stench of the profit motive behind it.”

Opponents of the movie first tried to censor it by pressuring sites on the internet to “take down this dangerous film” — which led the leading civil liberties organization for writers and artists, PEN America, to demand that the public not be barred from seeing the film. PEN America insisted that those behind the censorship campaign should cease their efforts to deny the filmmakers their right to freedom of expression.

The group pushing the film’s removal from all streaming services circulated a petition against it and succeeded in getting the film temporarily removed from one site that had embedded the film from its YouTube page, and were able to get a subsequent livestream with the filmmakers canceled.

But after being denounced by PEN America, their mission not only failed, it backfired. “When you tell the public they can’t see something, they are going to make sure they see it,” said producer Ozzie Zehner. “The number of viewings — we had hoped for 100,000— shot up into the millions. The censors’ overheated, over-the-top, and slanderous rhetoric against us and our movie guaranteed their own instant loss of credibility — from the very people they were desperately warning not to watch our movie.”

“This is our environmental movement, our future — and frankly the future of life on Earth that is at stake," said Moore. "‘Environmentalists' funded by wealthy foundations and billionaires, and that partner with capitalism, want you to believe it’s their environmental movement, but everyone needs to have a seat at the table and a voice in this great debate—while there is still time.”