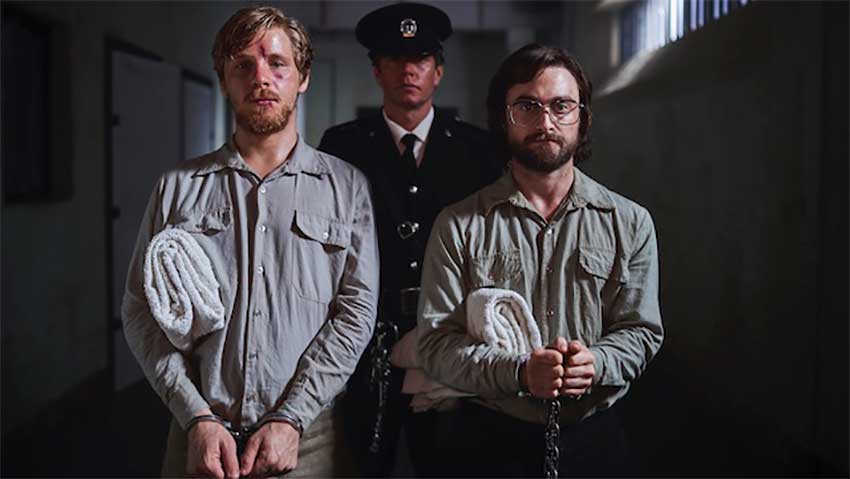 Daniel Radcliffe stars in ESCAPE FROM PRETORIA playing Tim Jenkins, a real-life political prisoner during the days of apartheid in South Africa who escaped from Pretoria Prison. The film is now in a limited amount of theaters, On Demand and Digital.

The movie is based on Jenkins autobiography "Inside Out: Escape from Pretoria Prison." Jenkins and his partner are activists for the African National Congress (ANC) who were arrested in 1978 for spreading propaganda to free South Africa from Apartheid via leaflet bombs. They were not bombs meant to hurt anyone but spread leaflets for the struggle.

Jenkins was given 12 years for spreading propaganda and his partner Stephen Lee played by Daniel Webber eight years for his part. The story is about their plans for a jail break as soon as they arrive to Pretoria Prison.

Ironically they start planning their escape during the trial. At the prison, they meet other political prisoners. Jenkins is very handy, clever and incredibly skilled. He made the bombs. And now he's making prison keys out of wood during his workshop time.

Directed by Francis Annan (END OF A GUN, HOUSE OF THE RISING SUN), ESCAPE FROM PRETORIA is a very entertaining and suspenseful film. You're glued to the screen waiting for the jail break and the holding your breath during the close calls.

If it weren't a true story, this plot would not be plausible. Jenkins is MacGyver for real. The things he accomplished in this escape in 400 or days or so was just short of miraculous.

While there's not much background on the characters, it's easy to root for them because of their activism against apartheid. The dialogue is often hard to understand because of the strong accents.

ESCAPE FROM PRETORIA is not your usual prison movie. The characters don't go through the usual cases of harassment by other inmates or sexual abuse largely because they're imprisoned with other political prisoners. The guards, however, like in most prison movies are a piece of you know what.

Daniel Radcliffe is superb in this role. For once I forgot this was Harry Potter because of his enthralling performance but he does have a resemblance to John Lennon which I couldn't get out of my head at the start. This is probably one of my favorite performance post Harry Potter.

ESCAPE FROM PRETORIA was extremely entertaining. Bring plenty of popcorn because this edge-of-your-seat thriller will have you nervous munching.