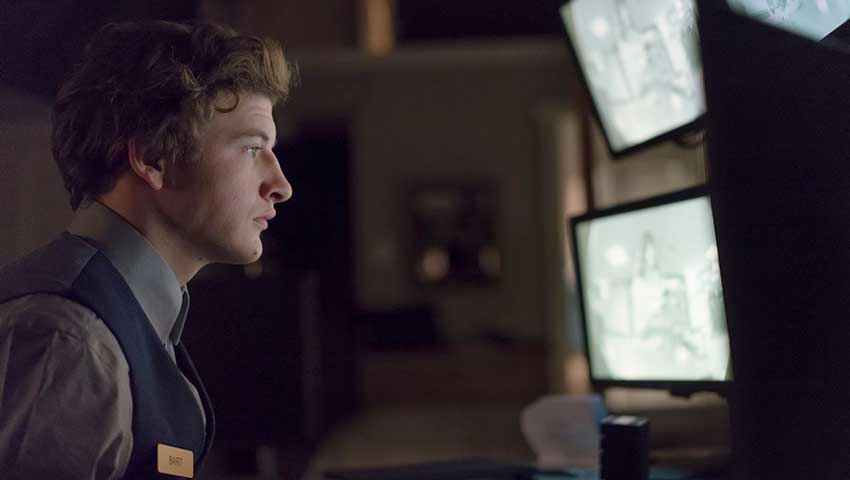 While an interesting watch, THE NIGHT CLERK fails to provide a protagonist to root for. As much as the film attempts to extensively validate the reasons behind the lead character's voyeuristic ways, it's still too creepy to get past it.

Written and directed by Michael Cristofer (ORIGINAL SIN, “Gia”), THE NIGHT CLERK centers on a young, hotel night clerk on the autistic spectrum who witnesses a murder in one of the rooms during one of his peeping tom sessions. Bart Bromley may be socially challenged but apparently he is technically savvy enough to plant spy war in the hotel rooms and watch the hotel patrons live both at the front desk and at home where he lives in the basement with his widowed mother (Helen Hunt).

Bart has the murderer on tape, but he hides the evidence out of fear of being discovered. John Leguizamo is the lead detective on the case, and Bart is his number one suspect.

The hotel owner moves Bart to another hotel location. Bart meets a new hotel patron named Andrea who takes a liking to the young man, and vice versa.

The premise sounds a bit too far-fetched including the intentions of the main character. The main issue with THE NIGHT CLERK is its lead's motives for his voyeuristic ways. Tye Sheridan gives off some serious Norman Bates vibes as the peeping tom spying on women, but we're supposed to believe it's not sexual in nature. Bart explains to another character that he watches people to learn proper behavior and mannerisms to be normal.

We get a lesson in autism from Det. Espada (Leguizamo) as he explains the tendencies of the disorder, and from Bart's mom who explains away his "innocent" behavior. The viewer is being told in a lot of exposition what to believe about this voyeur. As much as the writer/director explains away this behavior, viewers may not get past the fact that Bart is intruding on people's privacy and creepiness of the situation.

The twist is mapped out midway through the film through the dialogue between two characters who inform us of their past history therefore providing clues to where the story is heading. The ending is not much of a surprise.

Tye Sheridan's performance as Bart is an uncomfortable watch. While I'm no expert in autistic mannerisms, the performance may be a bit exaggerated.

While the identity of the killer is no surprise, what will keep you watching is your curiosity of how things will end for Bart. His fate is much more interesting, but the final outcome, unfortunately, is uneventful.

The obvious influence behind THE NIGHT CLERK may be Alfred Hitchcock's REAR VIEW WINDOW but it fails to build up suspense and Bart comes off more like Norman Bates who might snap at any minute.

If Cristofer's goal was to make viewers feel uncomfortable watching THE NIGHT CLERK, mission accomplished. The creepiness level was just too much to fully enjoy this new movie release.

THE NIGHT CLERK is in select theaters, on demand and digital on February 21, 2020.