In FORCE OF NATURE, Mel Gibson and Emile Hirsch play the douchey cops people are protesting against. FORCE OF NATURE also stars Kate Bosworth in an edge-of-your-seat thriller that has many flaws but it'll keep your interest, however the timing for this movie is inappropriate.

Set in Puerto Rico during a Category 5 hurricane, Hirsh plays officer CARDILLO a NYC cop demoted to desk duty on the island. He and his new rookie partner played by Stephanie Cayo are assigned to evacuate the residences in a neighborhood. While removing residents from an apartment building, a band of violent thieves led by actor David Zayas, arrive looking for payday. The cops come across a retired detective, named Ray played by (Mel Gibson), his daughter, Dr. Troy (Bosworth) and Griffin, another resident in the custody of the cops.

FORCE OF NATURE'S action is set mostly in an apartment building where the residents seem to be ex patriots hiding out or living the rest of their lives on the island. The locals are no where to be found - probably BC they evacuated already. Griffin, is African American who moved to Puerto Rico after an incident with police brutality. The others you'll learn are there to retire away from their former lives. 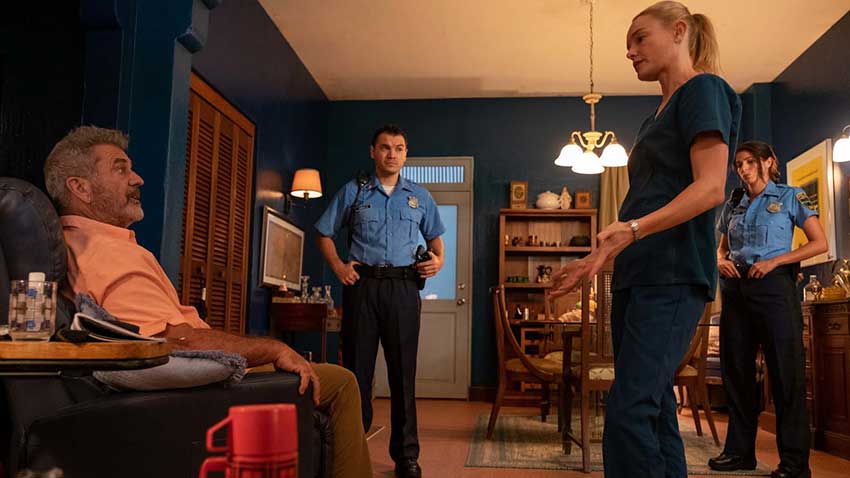 FORCE OF NATURE is a solid action movie directed by Michael Polish (TWIN FALLS IDAHO, NORFOLK) but it's problematic with its lead. Hirsch's Cardillo is not likeable. The movie starts out with his character contemplating suicide but he can't go through with it. Then we cut to the police station where it's obvious he hates his job and has disdain for the locals. During the course of the film, he sort of wakes up from his mental state when he jumps into action but he doesn't really redeem himself in the sense that he's not a changed man except he now has a love interest and a renewed interest in holding a badge but there's no sense of a greater purpose or his attitude towards the locals have changed.

Mel Gibson is especially not likeable as a curmudgeon and sexist retired detective. He lays on the NY accent pretty thick and it's cartoonish at times. In real life, he's been accused of sexist and racist remarks so his character seems to be playing out that perception of him on the big screen. Not sure if that's the right role for him right now - but by no means does the film put him in a hero position even though he takes out a few of the bad guys.

Gibson's selection in roles the last few years are curious ones. He always gravitates towards playing an anti-hero, but in recent years, probably because he's been shunned by major studios for some of his past comments, he's relegated to B movies playing men living off the grid. But they're not that bad. They're action packed and enjoyable like GET THE GRINGO even though it suffered from extreme stereotypes of Mexico and Mexicans, and BLOOD FATHER. He's done a few studio films like DADDY'S HOME 2 and THE EXPENDABLES 3 but the last two years he's been relegated to indie action films. But in FORCE OF NATURE - while there are attempts at humor for his outdated views of policing, it comes at the wrong time with the rise of the BLM movement because of recent events.

I interviewed director Michael Polish and asked him if Winona Ryder's claims about an anti-Sematic rant he allegedly made long time ago will hurt the film. Read what he said here.

Everyone shares in the hero moments, but it's the women who are the most empathetic and rescue the men in other ways especially Bosworth who is a doctor.

The men are these outcasts while the women are the stable ones. I like that about the film. At one point, Kate Bosworth's character tells a male character not to worry, she's got his back. I really liked that gender twist. That's what real life is like - women are fierce protectors but in films we're relegated to damsels in distress needing a man to rescue us.

Early reactions to the trailer complained it was too early for a movie to be set in PR during a hurricane and the bad guy is a Latino. While the antagonists are Latino, it doesn't play out in a stereotypical fashion. The heist is not your typical one so the twist is a good one.

The protagonists, however, are not great people either. The movie is about these outcasts played by Hirsh and Gibson. At the beginning Hirsch hates that he has to evacuate "these" people and prefers desk duty. He doesn't care to learn the language and complains about it. Gibson's Ray character is an old school cop who complains that the police are too soft on criminals and misses the old days of policing.

Hirsch's female partner is a rookie and idealistic - she represents the more progressive police.

So while FORCE OF NATURE has its many flaws, it's an interesting watch. I'd recommend it if you're looking for straight up action movie.