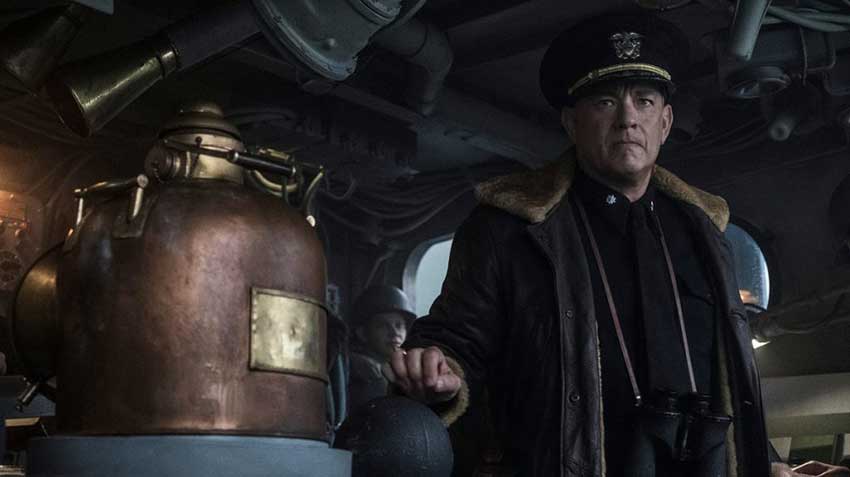 There’s a reason why the Tom Hanks naval drama was dumped from a theatrical release to Apple TV+. The World War II movie is one of dullest entry in the genre, and the shortest clocking in at 88 minutes. With little character development, GREYHOUND has some intense moments and intrigue, but initially it's difficult to become invested in it.

Tom Hanks is captain Ernest Krause, a WWII naval commander on a U.S destroyer leading an international convoy of 37 Allied ships across the Atlantic while being chased by wolf packs of Nazi U-boats.

Hanks wrote the script himself, adapting the war-time battle on the high seas from C. S. Forester’s fictional novel, “The Good Shepherd.” Tom Hanks has a penchant for World War II movies, so it seemed right up his alley.

The approach is unique for an action-movie. The perspective of the action is solely placed through Tom Hanks’ Captain Krause. It is all seen through the eyes of the commander. We see what he sees and nothing else. There is no different angle of a burning or sinking ship or submarine except through his lens. The viewer has no clue what’s going on underwater, below deck or the location of the enemy except for the information provided by the crew to the captain. We don’t meet the enemy or the crew of the Allied ships, except for the other captain’s voices through radio communication. This is how war on the sea is conducted in real-life, and that’s perhaps what Hanks and director Aaron Schneider intended.

The one-sided perspective doesn’t work in a movie billed as a WWII action movie. Hanks’ intentions are clear. He wanted to show what it’s like for a naval captain commanding a battleship in WWII. The crew and the Allied ships rely on these commanders to save the day. The navigation is quite impressive in GREYHOUND, and you come out of it having more respect for these wartime heroes.

While the limited lens approach is understandable, the weak character development is not. All we know about the captain of this ship is there is a woman (small role by Elisabeth Shue) waiting for him to return from the war to marry, and he’s a religious man. With Hanks as the lead, the actor can leverage his likability in real-life to invest us in his mission, but it’s still a glaring oversight.

The supporting cast are just names and ranks. (Thankfully, there’s a Lopez played by Manuel Garcia-Rulfo which made me smile - thanks Hanks.) The only emotional attachment Captain Krause has on the ship is with his steward/cook who brings him his grub and encourages him to eat.

Director Aaron Schneider is mostly known for his work as cinematographer with only five directing credits to his name. The cinematography sets the right mood inside the battle station but outside, some of the scenes are heavily CGI’d. Some shots look realistic but others don’t look like the same space specifically in the near collisions with other boats.

At the onset of the movie, it’s hard to be immersed in the world of GREYHOUND when you know very little about the character and the environment. You don’t get hooked until 20 minutes into GREYHOUND once you figure out the format.

For a wartime movie, GREYHOUND’S budget is relatively low at $55 million, if online sources are correct. That makes sense given its limited locations, and mostly CGI work.

GREYHOUND is not a terrible movie. If anything, it’s a lesson in naval warfare if that’s what you’re interested in. This chick found it fascinating, but others looking for the cheap thrills of an action movie, expect to be torpedoed.