'Nomadland' Review: A Tragic Story of the American Dream 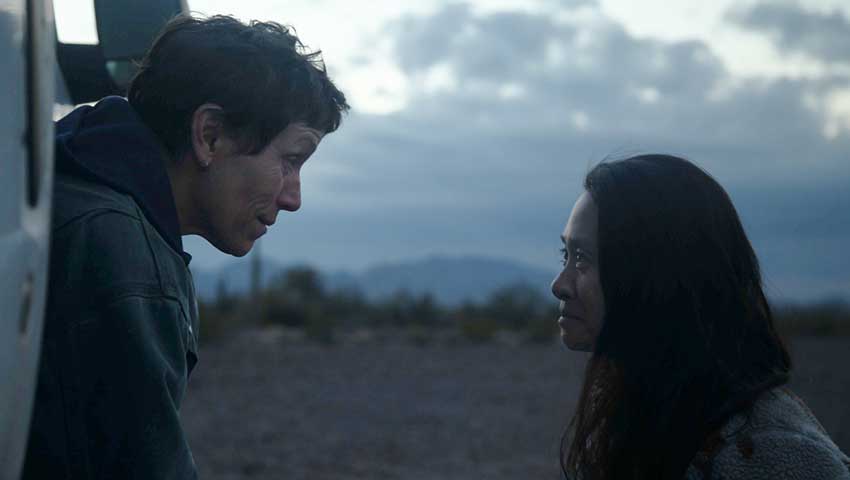 Chloe Zhao delivers one of the most striking films of 2020 with NOMADLAND starring Frances McDormand in another award-winning turn. NOMADLAND is a devastating look at one woman's life as a nomad living out of her van traveling from seasonal job to another to make ends meet. While McDormand's character is fictional, it's a tragedy told through McDormand's adventure while bringing to light real-life nomad's personal stories.

Inspired by "Nomadland: Surviving America in the Twenty-First Century" by Jessica Bruder, the story is set after the economic collapse of 2008. Fern (McDormand) has lost her husband and her town in rural Nevada has closed down. The over 60-year-old packs her van and sets off for a new chapter in her life. She travels across the American West taking on seasonal gigs from state to state. Along the way she meets fellow nomads who tell their actual stories.

David Strathairn also stars as a fellow nomad, as well as real-life van dwellers featured in the book - Linda May, Charlene Swankie, and Bob Wells.

The setting is America's open landscape. The American West has been romanticized in cinema, but not here in NOMADLAND. While beautiful, it's dry and barren, and serves as the backdrop to Fern's weathered face. It's as if Earth has nothing more to offer in its harsh terrain that match the lines on McDormand's face. It's quite a stark and poetic contrast.

The natural lighting adds a realness to this nomadic life. It's a tragedy of the American dream. This minimalistic way of living is a lifestyle choice but for the most part, it's mostly retired Americans who can't afford a stationary life on their social security benefits. It's a heartbreaking story about the forgotten and downtrodden.

Once again Frances McDormand delivers an award-worthy performance. While she often plays witty and astute characters, here she emotes more with her face than words.

Director Chloe Zhao and Frances McDormand who spearheaded the project, actually took to the road in vans to film NOMADLAND. They lived the life to tell a failings of the American dream, and they captured it beautifully. NOMADLAND is not your feel good story, but a potent one.

Expect award season to recognize Zhao's poetic story, and if it doesn't there will be hell to pay.

NOMADLAND will be released theatrically February 19.