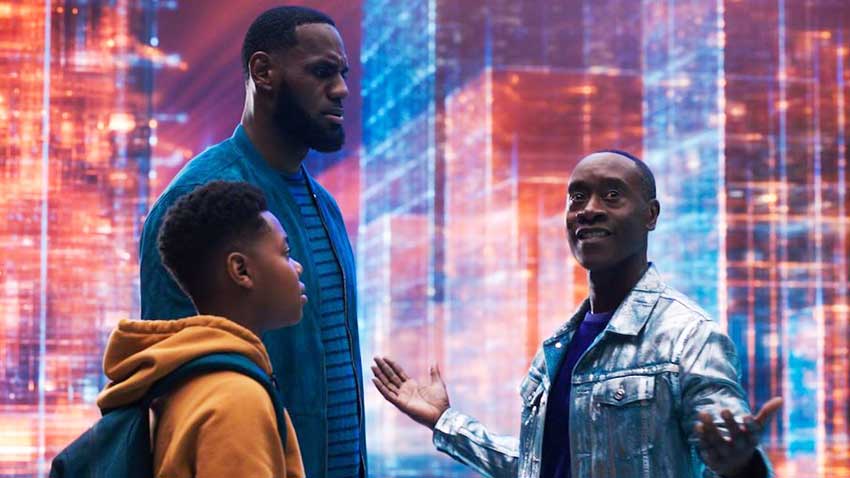 SPACE JAM: A NEW LEGACY is more of a remake than a sequel with fancier graphics. Except in this follow-up, Don Cheadle is the MVP of this court rather than the star LeBron James. You get more of the same in his version with the Looney Tunes providing the laughs and over-the-top acting from the basketball star.

Directed by Malcolm D. Lee (THE BEST MAN HOLIDAY, NIGHT SCHOOL) and produced by Ryan Coogler (BLACK PANTHER, CREED) and Maverick Carter, SPACE JAM: A NEW LEGACY NBA champion and icon LeBron James is forced into an adventure down a digital rabbit hole of animated characters in the Warner Bros. library. Don Cheadle plays AI G. Rhythm, a rogue artificial intelligence that kidnaps LeBron and his young son and challenges him to a game of basketball to save his son. James enlists the help of the Looney Tunes squad vs the high-tech Goons.

The main storyline focuses on the father/son relationship with the basketball icon playing an overbearing parent forcing his children to follow in their father’s footsteps but Dom James (Cedric Joe) is more interested in building video games. Their family drama takes a turn when AI G forces them to compete against each other.

The funniest portion of the movie is the second act when James is recruiting the Looney Tunes which takes them to different worlds you’ll recognize from other Warner Bros. property like Games of Thrones, Harry Potter, Pennywise, and some classic characters from Scooby-Doo, King Kong, The Flintstones and so much more. However, don’t blink or you might miss the references. Too bad they didn’t linger on a few of those iconic characters. Luckily you’ll be able to scroll through and catch some of your favorite ones and get a little nostalgic for the good times if you view it on HBO Max.

When it comes time to shoot hoops, the basketball game between the Tunes and the Goons seems to last a lifetime. While there are few twists and turns, the game lasts much longer than it should.

Don Cheadle steals the show as the maniacal but hilarious villain AI G. The recently Emmy-nominated actor (for guest-starring on The Falcon and Winter Soldier) brings the energy and hijinks to the story. Cheadle took great pleasure in playing a sort of wizard who can manipulate the digital space. Without that character, the entire film would’ve fallen flat if James had to carry the whole film.

LeBron James is no stranger to acting having had an impressive cameo in TRAINWRECK with Bill Hader and Amy Schumer, or voice acting in various animated projects (Teen Titans Go!, The LeBron), but acting opposite a green screen seems entirely foreign to the basketball icon. When he acts against a human character he seems to do just fine but when it comes to the animated characters who are not there on set, he overcompensates with over-the-top reactions. That’s on the director for not providing better direction, so you can’t fault the star. Michael Jordan suffered from the same problem, but you can’t blame an athlete who’s obviously doing it for fun.

Bugs Bunny, Lola Bunny, and the rest of the gang remind fans why we’ll never tire of these classic cartoon characters. The voice cast brought the same energy and spirit to the Looney Tunes much better than the original did. There were a few questionable voice-acting choices in the 1996 film so the follow-up is better in that aspect.

Speedy Gonzales, voiced by Gabriel Iglesias, is a particular favorite. While the stereotypical accent is still present, Iglesias gives it a more homeboy tone rather than an exaggerated one. That performance serves as a reminder that we need a solo movie about the lovable Mexican mouse.

Much has been made about transforming Lola Bunny into a more relatable female rather than a sex symbol. Voiced by Zendaya, Lola takes charge on the court and will easily become the favorite among young girls. Having recently rewatched the original, Lola Bunny was a fetishized character that male characters drooled over. It doesn’t play well today in light of the #MeToo movement, and the filmmakers made the right decision to overhaul the still sexy bunny.

There are many more updates to the SPACE JAM follow-up. Female basketball players Diana Taurasi and Nneka Ogwumike are characters as part of the Goons as are other players like Klay Thompson, Anthony Davis and Damian Lillard.

For basketball fans and families, SPACE JAM: A NEW LEGACY is the perfect choice this weekend. It’s fun, colorful and nostalgic.