What To Watch: The Forever Purge, Werewolves Within, Boss Baby 2 Reviews 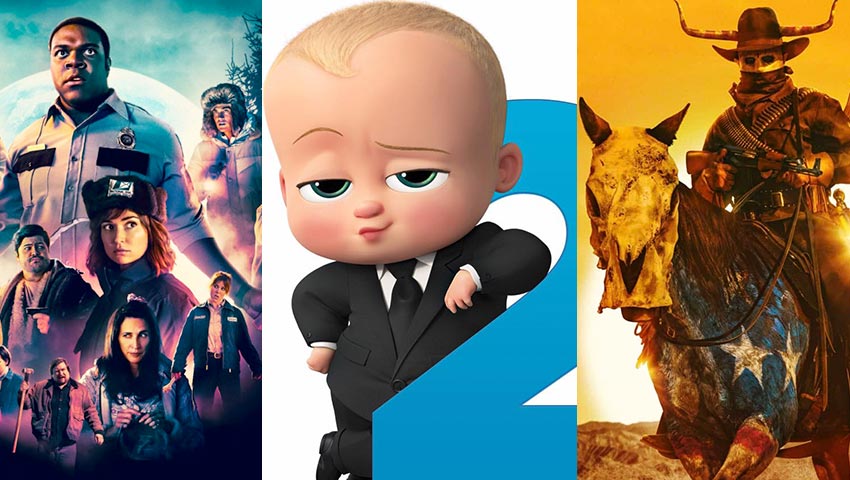 There’s a film for everyone hitting movie theaters this weekend and on Digital. The next chapter in THE PURGE franchise racks up more bodies, THE BOSS BABY sequel entertains the whole family, and WEREWOLVES WITHIN is a riotous whodunit comedy for those looking for some escapism.

Finally, Mexicans are the heroes in a Hollywood movie. The fifth movie in THE PURGE franchise lays it on thick with the ideological messaging but it’s a reality check on the real horrors taking place in today’s political climate. THE FOREVER PURGE is one of the better sequels SINCE THE PURGE: ANARCHY (2014) starring Frank Grillo.

The central theme behind all THE PURGE movies since it first premiered in 2013 has been a socioeconomic one. It has grown even more political with the sequels to mimic real-world events and the rise of white supremacy thanks to a former US President.

THE FOREVER PURGE offers more of the same but the stakes are higher. The criminals don’t stop the violence once the sanctioned Purge is over. They continue the bloodshed on a mission to eliminate every foreigner, non-white citizen, and the rich.

THE FOREVER PURGE stars Mexican actors, Ana de la Reguera, Tenoch Huerta, Alejandro Edda, Josh Lucas and Will Patton. The characters are compelling, but the dialogue is often too on the nose.

Like the other PURGE movies, THE FOREVER PURGE is in the same spirit, but this fantasy is all too real which is the real horror. However this time, the white savior isn't required because the Mexican characters are the heroes of the day.

If you’re not interested in art imitating life, skip it but if you want to see racists get their comeuppance - then it’s worth the ticket.

The Templeton Brothers return as adults but the two siblings have grown apart. A new boss baby enters the picture with a new mission that will bring Ted and Tim together.

Ted’s daughter Tina has the gift of gab like his brother. Hence it’s a family business. She sets the warring brothers off on a mission to uncover a sinister plot at Tabitha’s school, but not before reverting her uncle Ted back to his baby boss self, and her dad to the same age he was in the first movie.

At the heart of the animated sequel is a family drama to which everyone with a sibling can relate. The main setting is a school with Dr. Armstrong as the headmaster where most of the entertaining story takes place.

It's a cute family film with PG adult humor. Goldblum’s villain is a fun character with a few twists and creative weapons.

The animation is eye-popping and stunning with colors like that of a color wheel lollipop, which funny enough are used as weapons.

THE BOSS BABY: FAMILY BUSINESS is playing in movie theaters and on Peacock TV.

For those looking to forget their troubles, WEREWOLVES WITHIN is a fun and hilarious good time. The whodunit horror-comedy is filled with quirky characters headed by Sam Richardson (THE TOMORROW WAR), Harvey Guillén (WHAT WE DO IN THE SHADOWS), Catherine Curtin (Orange is the New Black), Milana Vayntrub, and others.

Directed by Josh Ruben and written by Mishna Wolff, the setting is small-town America where a proposed pipeline has created division among the few residents. Finn, the new Ranger (Richardson) arrives to Beaverfield during a snowstorm but he ends up more of a peacemaker and idealist when a murder of a local man by an unknown force sends the off-beat characters into a frenzy. Trapped inside the local inn, the characters must figure out who’s the werewolf.

The whodunit horror-comedy entertains with quirky characters and a twist on the genre with horror elements. Diverse characters inhabit this small town which ordinarily wouldn't be accepted, but the director ignores the implication to drive home a message.

The finale is a feel-good moment that reinforces a positive message about what it means to be a good neighbor.

WEREWOLVES WITHIN is playing in movie theaters as well as on Digital.

THE TOMORROW WAR
Chris Pratt’s action movie is another option on Amazon Prime Video. While it’s your average action/sci-fi movie, the alien design is worth the watch. Full review below.

'The Tomorrow War:' Come For The Scary Alien Monsters