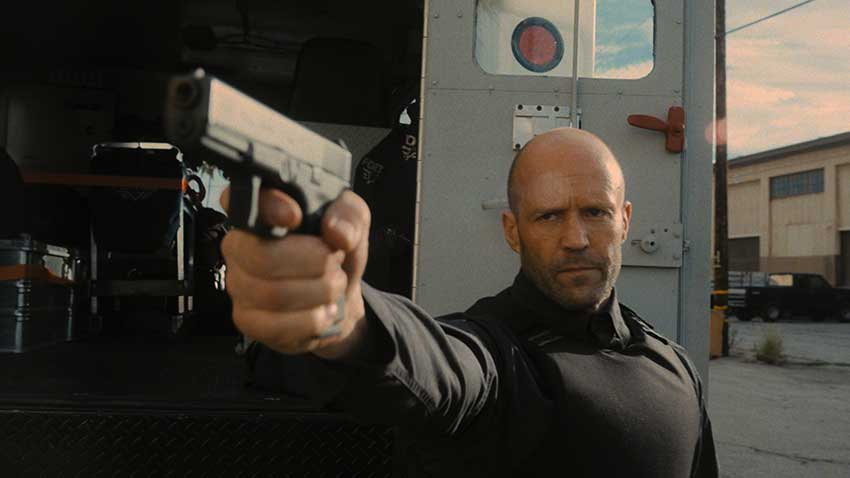 WRATH OF MAN is the kind of heist/revenge film you’d expect from the Guy Ritchie and Jason Statham collaboration. WRATH OF MAN hits the heist movie checklist, but nonetheless it's highly entertaining.

Based on the 2004 French film “Le Convoyeur” (CASH TRUCK), WRATH OF MAN is relocated to Los Angeles. Statham’s H takes a job as a cash truck security guard to avenge the death of a loved one. HIs expertise as a marksman during robbery attempts leaves everyone wondering who this mystery man really is.

It’s almost certain as with most film adaptations, that the original will be a better film, but this reviewer hasn’t seen the 2004 movie so no comparison will be made.

The Guy Ritchie and Jason Statham team up is an attractive lure given their history. Ritchie and Statham both broke-through with LOCK, STOCK AND TWO SMOKING BARRELS (1998) and they continued their collaboration in SNATCH (2000) and REVOLVER (2005), but they haven’t worked together for over 15 years. WRATH OF MAN seems like the perfect collaboration.

Ritchie’s WRATH OF MAN is a crime/revenge thriller. The film hits familiar plot points for this type of movie but the first portion is part mystery as he builds up to a reveal. That is what makes the first half of WRATH OF MAN very compelling.

WRATH OF MAN opens with a heist of a cash truck from one perspective only - the back of the armored truck as the thieves break in and the guards are forced out. You don’t see any faces or get much information except that the robbers are a highly skilled crew.

Then we meet H, the new employee of Fortico Securities, the armored truck company that got hit. We learn the fate of the faceless guards who lost their lives in the earlier scene. H pretends to be a semi-skilled shooter during his weapons training, until his armored truck falls under attack from another robbery attempt, and he takes out the culprits with marksman-level precision. H is not your average security guard.

Ritchie’s latest crime thriller is not presented in a linear fashion. The movie returns to the opening events from different perspectives to reveal how everyone fits into the puzzle. Ritchie plays with the timeframe with flashbacks to explain H’s motivation as well as to introduce the heist crew. Slowly the viewer gets answers to H’s past, and the reason he’s out for vengeance.

Some of the flashbacks seem unnecessary. We learn extraneous details about Statham’s character and his connections to the criminal underworld. We get the idea he’s a menacing figure right away so we didn’t need the extra information.

The antagonists of WRATH OF MAN are one-dimensional caricatures. Their motivation behind the heist are your typical go-to reasons for a crime thriller. We meet them half way through the film, and learn everything we need to know about these men in single scene. There’s nothing inventive here.

At least this crew is a diverse bunch played by Jeffrey Donavan, Laz Alonso (The Boys), Raul Castillo (ARMY OF THE DEAD) among others. In this type of a crew, there’s always a loose cannon, and that role went to Scott Eastwood but he’s no match against Statham’s skills. He’s rather bland as the a-hole of the group.

Guy Ritchie gravitates to crime thrillers with such films as THE GENTLEMAN, ROCKNROLLA, SNATCH and SHERLOCK HOLMES. His latest, however, feels different. His pacing and signature style is missing from this effort. That’s not a bad thing. Some of his past work feels overdone and frenetic. Here the shots are straight-forward, and he lets the camera linger on his characters. However, there is an extreme close-up moment of Eastwood’s squinting eyes that feels like a wink to dad’s spaghetti western days.

The first half of WRATH OF MAN unfolds in a unique way, but the third act feels like a recycled heist movie. All the tricks of the trade are employed here, but the action is exciting enough to keep your eyes glued to the screen with a climactic shoot out.

Set in Los Angeles, Ritchie doesn’t make good use of the city. Although there are beautiful sweeping views of Los Angeles and in background shots, the City of Angels doesn’t become a character like in movies such as HEAT and COLLATERAL, both directed by Michael Mann.

WRATH OF MAN delivers the goods on the action and intensity, and you get exactly what you expect from a Statham and Ritchie team up. Statham with his brooding, bad ass self is nothing new, yet we always want more and he delivers here once again.