Behind the Making of Electro in THE AMAZING SPIDER-MAN 2

Pablo Holcer served as the Senior compositor for the award-winning Sony Pictures Imageworks group which worked on THE AMAZING SPIDER-MAN 2. As the compositor, his team merged all the different elements from the greenscreen work, CG effects, interactive elements, and the live action plate to create a seamless final version of a shot.

Hailing from Buenos Aires, Argentina, Holcer walked us through the process of combining Jamie Foxx’s live takes as Electro and layering in the CG effects for his skin. In other special effects driven films, motion capture dots are placed on actor’s faces to make it easier to add CG elements in post production. To create Electro, the process was much different and “interesting,” says Holcer.

That job was quite intensive, according to Holcer, “Electro was filmed, but the majority of work was done with computer generation.”  On set, Jamie Foxx was in full costume with blue make-up designed by Greg Nicotero’s KNB EFX Group  (The Walking Dead). Nicotero’s team developed the special effects make-up for the character while Academy Award® winning special effects make-up artist Howard Berger finalized the look in tests prior to production, and then served as on-set make-up artists for both Foxx and the Electro stunt double.   Sony Pictures Imageworks then added the visual effects layers on top of their work.

To transform the blue make-up worn by Jamie Foxx into a glowing, blue-skinned Electro, Visual Effects Supervisor Jerome Chen was charged with creating the electrical elements in CG and secondly, the bolts generated by the villain.

Holcer says no matter the project whether animation or live action or CG, the goal of special effects is to base it on reality. To do that with Electro, the Visual Effects team studied nature and watched video of lightning bolts, tesla coils, plasma ball, and any other form of energy including the colors it generates – not just blue, but orange and purples. 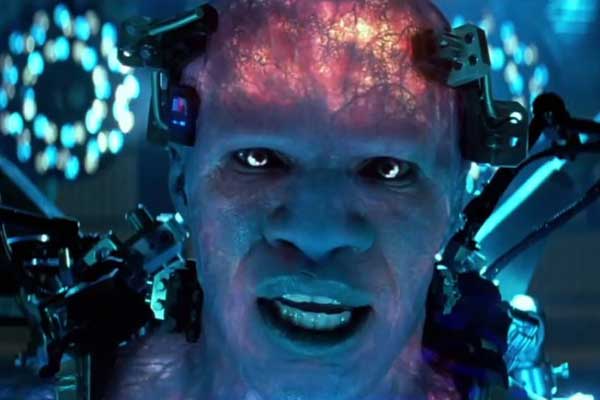 Once the Visual Effects department delivered the effects for his skin and powers, Holcer’s team took those elements and combined “tons of layers” to achieve Electro’s look onto the live action shots. It was an extra challenge layering the colors, the glow and the electrical charges as Electro moves on screen. The different layers had to be animated, moved and modify to replicate various forms of electricity.

With various elements to combine, Holcer says his job is about detail. “This is a job of details as much for the character as well for the animation.” While his job is very technical, Holcer says the primary goal of his work is to use the visual effects to enhance the story. The second requirement is to bring the director’s vision (Marc Webb) to the big screen.

Good thing technology has improved in the last decade, which makes Holcer’s work easier. Prior to joining Sony Imageworks, Holcer worked on the Life Of Pi, Superman Returns; The Chronicles Of Narnia: The Lion, The Witch, & The Wardrobe; The Golden Compass and Happy Feet. Advancements in rendering, simulation and capacity to store and manipulate all the elements in a computer has greatly improved. Unfortunately, it still takes a month to six months to composite a complicated scene.

Unlike older films in which the CG work stood out like a sore thumb next to the live action THE AMAZING SPIDER-MAN 2 is a perfect example of how far visual effects has come along.

THE AMAZING SPIDER-MAN 2 is now playing in movie theaters.