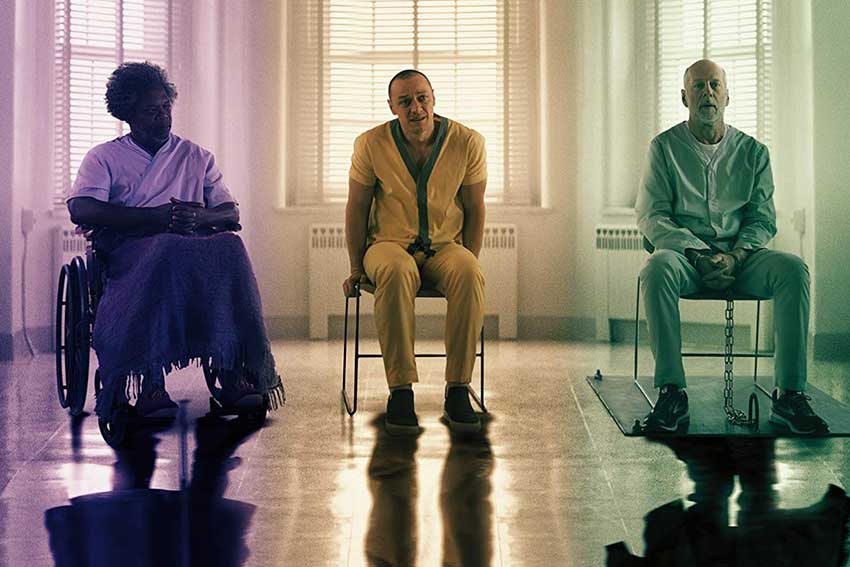 M. Night Shyamalan's GLASS will have fans divided once again. The movie that brings back Elijah aka Mr. Glass (Samuel L. Jackson), rain coat vigilante David Dunn (Bruce Willis) and SPLIT's Kevin Wendell Crumb's (James McAvoy) various personalities for a face off everyone's been anticipating but unfortunately the payoff is missing to end the trilogy. GLASS started off promising but when they cage up the three main characters, the fun is over. There is too much explaining away the plot and not enough action.

The nagging question throughout the film is why would you place three dangerous men together in a facility that clearly doesn't have the necessary security but relies on high tech methods to keep them in locked in. There is one overnight orderly in charge. It's not until the end when that nagging question is answered thanks to Sarah Poulson's Dr. Ellie Staple. Shyamalan lays the groundwork (in a lot of explanations) for more movies in this universe with her role.  The twist in the third act is not satisfying since the showdown between the three men is sacrificed in order to set up and open this new direction for possible sequels.

Speaking of the climax or lack of, the third act is filled with Elijah's comic book musings but this time, they are not as interesting as his theories in UNBREAKABLE. UNBREAKABLE is a great film because of its originality. In GLASS, there is nothing unique or any revelation that will make your head spin like in Shyamalan's previous movies.

Another questionable choice is bringing back young Elijah's mother from UNBREAKABLE, Charlayne Woodard who didn't look old enough to be grown-up Elijah's mother, even with the terrible make-up job to make her look older in GLASS.  Ms. Price, Casey and Joseph Dunn were all marginal characters with no real purpose to the story.

Anya Taylor-Joy reprises her role as Casey in GLASS and this time she's become Kevin's ally which makes no sense. He tried to eat her. Sure it could've been explained away as Stockholm syndrome but instead the writer/director has her feeling sympathy for Kevin and believes she could save him. We can only suspend belief for certain movie tropes, but that was is too far-fetched. This was a wasted role for the talented Cuban actress.

Upon leaving the theater, there were a lot of verbal reactions from the audience mainly feeling conflicted about how this highly anticipated saga came to an end. Watch out for many shards in this broken GLASS.