Danny Trejo returns as the ruthless bookie, Goldberg, in the wildest, bloodiest, Death Race ever. After a failed attack on inmate and legendary driver, Frankenstein, Black Ops specialist Connor Gibson (McGowan) infiltrates a super-maximum federal prison with one goal - enter the immoral and illegal Death Race and take Frankenstein down. Connor enlists the help of Baltimore Bob (Glover) and Lists (Koehler), and unexpectedly falls in love with bartending beauty, Jane (Marzano). Connor will have to fight for more than his life in this brutal world of no guards, no rules, no track, and no fear.

Interview: Danny Trejo On Cruising and His Lowrider Cars 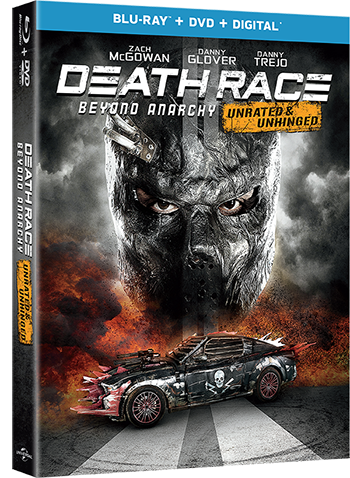 Inside the Anarchy: Filmmakers and cast describe how this chapter of the Death Race franchise stands out from the rest. From new locations, to a fleet of new cars, to a new star in Zach McGowan, see why Death Race: Beyond Anarchy is the deadliest Death Race yet!

Time Served: Lists & Goldberg: Hear Death Race franchise veterans Fred Koehler and Danny Trejo discuss what it’s like to be back playing Lists and Goldberg, and how their characters have changed.

·      On the Streets of Death Race: Beyond Anarchy: Director Don Michael Paul and cast explain how the stunt work gave the production a uniquely energetic feel.