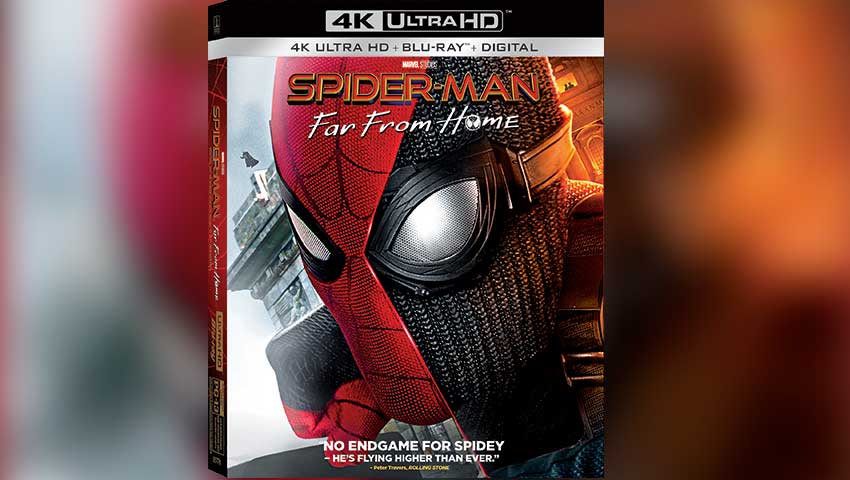 The Blu-ray, DVD, Digital, and 4K Ultra HD release arrives filled with bonus materials for the whole family including a special short, alternate and extended scenes, gag reels and Easter Eggs! Additional special features include Teachers’ Travel Tips with Mr. Harrington and Mr. Dell and interviews with the cast and crew focused on stunts and location in The Jump Off and Far, FAR, From Home. Explore how Spider-Man was introduced in the MCU in Stepping Up and get a closer look at the special chemistry between Jon Watts and Tom Holland in It Takes Two. Fans will want to dive into The Ginter-Riva Effect, Thank You, Mrs. Parker and Now You See Me features for more character focused details. The 4K Ultra HD also features Dolby Vision and Dolby Atmos audio.

Bonus Materials Include:
•New Original Short, Peter’s To – Do - List: Peter has a few errands to run before he can leave on his class trip.

•Stepping Up: Explore how Spider-Man was introduced in the MCU, the ways Tom Holland transformed the character of Peter Parker, and what the future holds for Spider-Man.

•Suit Up: The suit doesn't make the hero - but it does play a big role in who they are and who they can become. This piece examines all of Peter's different suits in the movie, and with behind the scenes footage, we see why some suits are better than others.

•Far, FAR, Far from Home: The film's illustrious locations serve story points and establish tone, but they're also amazing to travel to! Hear from the cast on their experiences filming on-location.

•It Takes Two: A special look at the chemistry between Jon Watts and Tom Holland.

•The Ginter-Riva Effect: A look at the villain sub-plot and how William Ginter-Riva ties Spider-Man: Far From Home all the way back to the beginning of the MCU.

•Thank You, Mrs. Parker: A look at Marisa Tomei's reimagining of Aunt May, from Homecoming to Far From Home.

•The Brother’s Trust: A quick look into some of the amazing work Tom Holland and his brothers have done through their charity, The Brothers Trust.

•The Jump Off: Interviews with the cast & crew take us through all of the amazing stunts of Far From Home.

•Now You See Me: We examine the evolution of Mysterio and why Jake Gyllenhaal was the perfect fit for the role.

•Stealthy Easter Eggs: Allow E.D.I.T.H. to reveal some of the hidden Easter Eggs you may have missed!

•Select Scene Pre – Vis: A side by side comparison of the Pre-Vis with the film