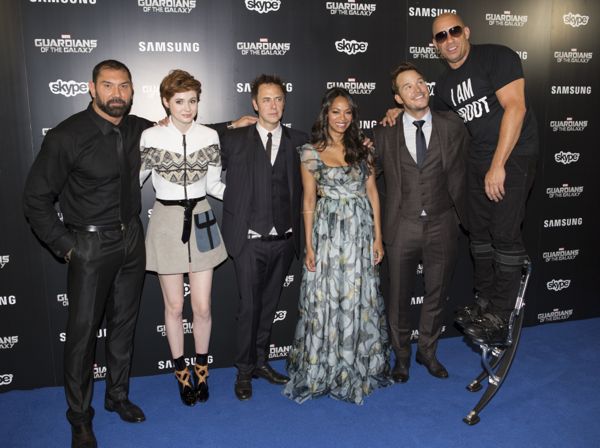 Marvel took the show to London to premiere GUARDIANS OF THE GALAXY, and Vin Diesel showed up in his new stilettos, and Mark Hamill walked the red carpet since he's in town shooting Star Wars: Episode VII.  GUARDIANS OF THE GALAXY cast members Chris Pratt, Zoe Saldana, Dave Bautista, Karen Gillan, and director James Gunn were also at the event at the Empire Leicester Square in London. Check out the official photos from the red carpet premiere.

Vin Diesel towered over his GUARDIANS OF THE GALAXY co-stars as he wore blade runners to mimic the height of his character in the movie. Wearing a shirt saying "I Am Groot," Vin Diesel voices the tree-like Guardian in the Marvel movie. His co-star Bradley Cooper and voice of Rocket the Raccoon was a no show, but a critter standing in for the actor was there making an appearance on director James Gunn's shoulder.

GUARDIANS OF THE GALAXY opens in theaters on August 1, 2014.