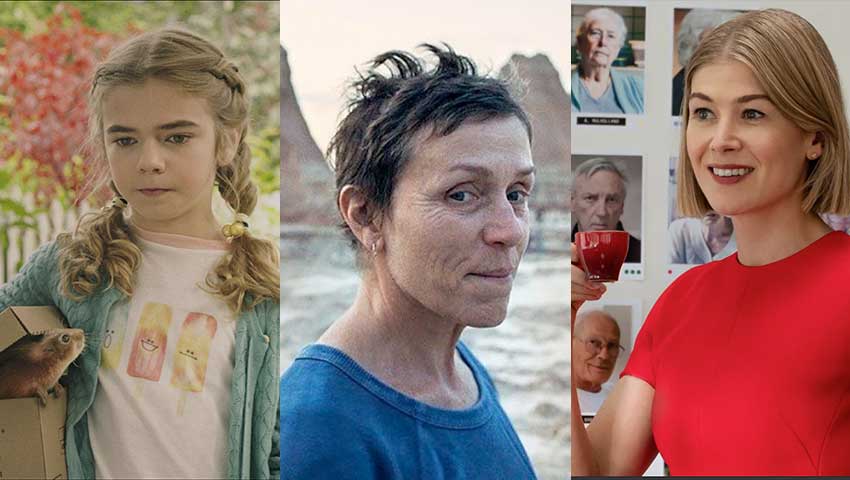 Three new films premiere this weekend on a streaming platform with noteworthy female leads. A fun family film, an award-worthy movie and a wicked female villain are your new choices this week. Here's my take on I CARE A LOT with Rosamund Pike, Disney's FLORA & ULYSSES and Frances McDormand as usual delivers an award-worthy performance in NOMADLAND.

These next three movies satisfy for very different reasons.

I CARE A LOT on Netflix

Starring a stellar cast that includes Rosamund Pike, Peter Dinklage, Dianne Wiest and Eiza Gonzalez, I CARE A LOT centers on Marla Grayson, a crooked court-appointed guardian who steals her ward's life savings after sticking them in a retirement home. Marla, a devious and cunning opportunist has no remorse for her line of work. When she forces one elderly woman (Wiest) out of her house and into a senior home, she soon discovers she messed with the wrong person.

The entire cast is exceptional but it's Pike who once again steals the show as a wicked villain much in the vain of her GONE GIRL character. She's unapologetic about her behavior, and she doesn't wince when she finds out she's up against forces that could easily destroy her.  Those types of juicy roles are usually reserved for male actors, but Pike has made it her signature type.

Another character to love is Wiest as an unwilling victim who's tough as nails and doesn't play demure to her captor. Gonzalez is also given a nice role in the Netflix movie as Marla's business and life partner. Lately the Mexican actress has chosen roles that show off her talents rather than her looks which is wise given that Hollywood would most likely always cast her as the "hot chick" if it was up to them.

If you enjoyed GONE GIRL, I CARE A LOT is the perfect choice.

Matilda Lawler, Alyson Hannigan and Ben Schwartz star in FLORA & ULYSSES streaming on Disney+ February 19. The comedy adventure is based on Kate DiCamillo's Newbery Award-winning book, "Flora & Ulysses: The Illuminated Adventures." Lawler stars as 10-year old Flora, an avid comic book fan who rescues a squirrel she names Ulysses who gains superhero powers after a mishap. Given her parents recent separation, this new adventure comes at a good time.

For the family, Disney's FLORA & ULYSSES is perfect entertainment, and even if you don't have children, there's plenty of references to classic Disney and comic book Easter Eggs that would thrill the nerdiest of viewers.  There's plenty for kids to enjoy with the adventures between a girl and her pet superhero, but the parents played by Alyson Hannigan ("How I Met Your Mother") and Ben Schwartz (SONIC THE HEDGEHOG) are very relatable in their own struggles as artists and spouses.

FLORA & ULYSSES is your prescription for a good time.

Inspired by "Nomadland: Surviving America in the Twenty-First Century" by Jessica Bruder, the story is set after the economic collapse of 2008. Fern (McDormand) has lost her husband and her town in rural Nevada has closed down. The over 60-year-old packs her van and sets off for a new chapter in her life. She travels across the American West taking on seasonal gigs from state to state. Along the way she meets fellow nomads who tell their actual stories.

Chloe Zhao delivers one of the most striking films of 2020 with NOMADLAND starring Frances McDormand in another award-winning turn. NOMADLAND is a devastating look at one woman's life as a nomad living out of her van traveling from seasonal job to another to make ends meet. While McDormand's character is fictional, it's a tragedy experienced by many as told through McDormand's eyes as she meets real-life nomads struggling to stay afloat in America.

Full Review: A Tragic Story of the American Dream

NOMADLAND is a tragedy so if you're in need up uplifting material, your best bet are the first two options.