Once again the fate of the planet falls on the Avengers on two fronts. First the Avengers jump into action at the start of the film against Hydra and Strucker in an Eastern European stronghold to take back Loki’s scepter. There they encounter mutant twins Wanda Maximoff (Elizabeth Olsen) and Pietro Maximoff (Aaron Taylor-Johnson) aka Scarlet Witch and Quicksilver. Scarlet Witch’s power includes messing with the minds of the Avengers, which opens a pandora’s box for some of the characters including Scarlet Johansson’s Black Widow, Robert Downey Jr.’s Tony Stark, Chris Hemsworth's Thor and the Hulk.

After that event, Tony Stark acts on his disturbing vision that Scarlet Witch planted in his head, and inadvertently creates Ultron (voiced by James Spader), the technological villain in AVENGERS: AGE OF ULTRON during his attempt to jumpstart his dormant peacekeeping program. Ultron sets out to destroy the Avengers and destroy the human race. Ultron’s shenanigans take the Avengers to other cities in Eastern Europe and Africa leading to more city wide destruction.

Now that we got the story details out of the way, here are the Pros and Cons of AVENGERS: AGE OF ULTRON.

Who doesn’t love watching the Avengers kick butt on screen while enjoying some eye candy.

The dynamic and humor between the Avengers is intact, which is part of the attraction of these movies. The scene of the Avengers kicking back and challenging each other to pick up Thor’s hammer best exemplifies that chemistry.

Natasha’s new outfit makes her a lot more cooler with the Tron-like influence.

Robert Downey Jr. is essentially Dr. Frankenstein in AGE OF ULTRON, the person responsible in creating the monster they will have to fight. That causes tension among the group, and as the viewer you also doubt Tony Stark’s intentions. Is Tony losing it? That’s the question everyone is asking themselves which adds a lit bit more peril than just Ultron’s actions.

In AGE OF ULTRON, director Joss Whedon digs deep into Natasha (Scarlett Johansson) aka Black Widow and Hawkeye’s (Jeremy Renner) past lives revealing some interesting things about them, but it also has it’s drawbacks (see Cons section). 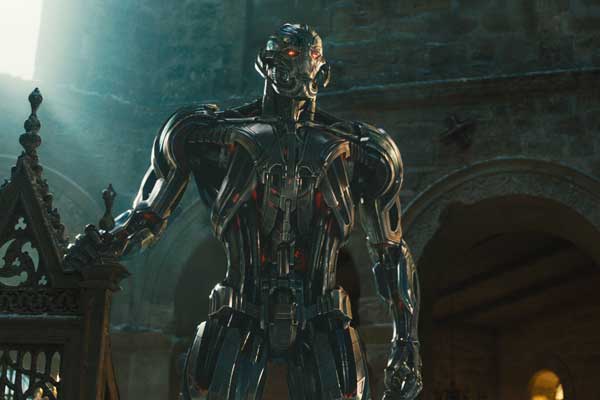 The opening scene with the Avengers descending on the Hydra compound puts you right in the middle of the story. It’s clear what their mission is, but you still get that feeling you missed something. After watching Agents of S.H.I.E.L.D Tuesday night, it all seems to make sense now with the set-up on Marvel’s television show.

The opening battle sequence with the Avengers is heavily CGI’d and looked too much like a video game, often feeling cartoony. Luckily the rest of the action scenes are less cartoonish, which leads me to speculate that opening scene was an after thought, and a Marvel ploy to connect it to Marvel’s TV world in Agents of S.H.I.E.L.D.

What would have been even more interesting than Ultron as the villain would have been to see the Avengers affected by Scarlet Witch’s mind tricks. Natasha, Tony and Thor are sidelined by their visions for a moment, but they spring into action once they uncover Ultron’s plans. They should have played that out throughout the film in which it affects their ability to save the world.

Again cities fall prey to the destruction, but this time it’s on foreign land. Regardless if it takes place in America or in Eastern Europe, the ploy to show humans and their residences in peril is getting rather old. Instead of blowing up buildings and streets, how about we get a good old-fashioned mano-a-mano fight between two characters. That was partially accomplished with the Iron Man’s hulk buster fight with the Hulk, but surrounded by mass destruction of cars and buildings. The Avengers take out more cities than the villains.  Hmm!

The Avengers are busy saving the world across the globe in Eastern Europe and Africa, but the global reach makes the story feel fragmented when they go onto different missions. Each mission has a story in itself, and in some cases it sets up future story lines and perhaps some villains.

Ultron’s villainy is a one-note, but what do you expect from a robot/program. Unlike Tom Hiddleston’s Loki who was charismatic and sympathetic, Ultron lacks those qualities or anything redeemable as the new antagonist.

AGE OF ULTRON also gives us insight into Hawkeye’s home life. It’ll surprise many to find out his true identity. Whedon detours from the action to present a different side of Hawkeye and Natasha, but it takes you away from the action way too long, and now you’re in a different movie. In addition, the backstory takes the mystery and glamour out of the those two characters.

Sure the human race deserves to be wiped out, and Earth taken over by another superpower but the world domination motive is getting rather old. With the onslaught of action movies coming our way in the next decade, let’s hope the writers can be more creative. MCU (Marveel Cinematic Universe) should take a lesson from their Netflix show Daredevil. Daredevil takes the threat and peril to a local level with a human villain played by Vincent D’Onofrio that’s far scarier than a robot or an alien.