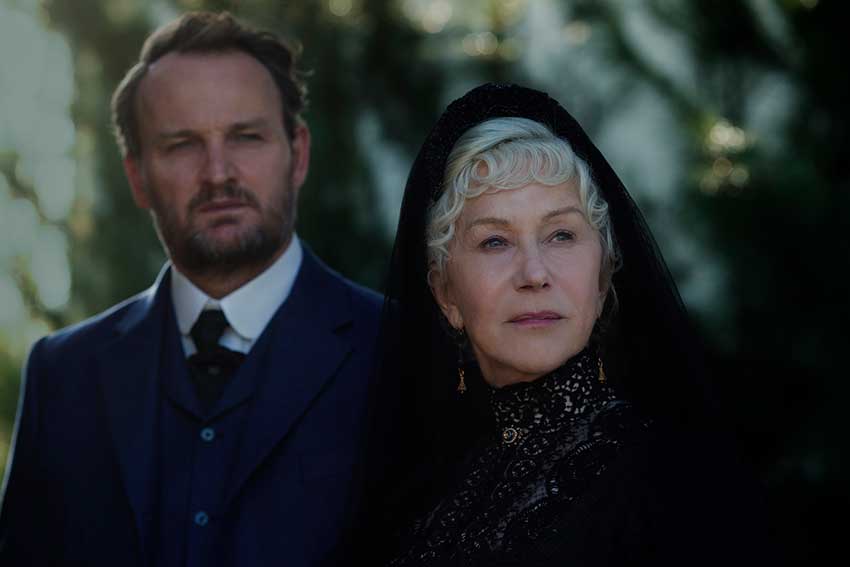 The premise behind the new horror flick, WINCHESTER is original but not the scares. The Spierig Brothers (JIGSAW, PREDESTINATION) directors bring lots of jump scares but not much else to the film starring Helen Mirren and Jason Clarke.

Inspired by true events, the Winchester house is a real-life tourist attraction for ghost hunters and thrill-seekers. The San Jose home, owned by the the gun maker's widow Sarah Winchester, is said to be haunted by the ghosts of people killed by Winchester rifles. The real heiress really did build a maze of a house with locked rooms that is said to be a sort of prison and asylum for hundreds of vengeful ghosts.

The folklore behind the Winchester Mystery House is the premise of the WINCHESTER movie. Helen Mirren stars as the heiress Mrs. Winchester who constructed additions to the house on a 24-hour basis, seven days a week. In the movie, her actions causes concern with the shareholders of her husband's company, Winchester Repeating Arms Co. They hire a troubled physician, Dr. Eric Price (Clarke) to assess the woman's sanity so they could take full claim of the company.

As expected, Helen Mirren and Jason Clarke turn in good performances but the story itself has too many holes. Mrs. Winchester believes the spirits of those killed by the Winchester rifles drives them to her home. Somehow she builds rooms that lock up the spirits, but there is one vengeful spirit out to kill her. The obvious question is how do you detain a lost soul in a room? The reason given in the movie isn't plausible given what we know of ghosts. Sure it's a fictional film, but you have to believe.

A lot of things don't add up, but the jump scares will get you through the horror flick. If you're a screamer, WINCHESTER will have you jumping out of your seat a few times. Evil faces appearing out of the dark always get you but the directors rely on that scare tactic incessantly, and it eventually tires out.

For casual horror fans, WINCHESTER will get your fright on, but for those hard-core horror viewers, the movie won't do much for your heightened senses.