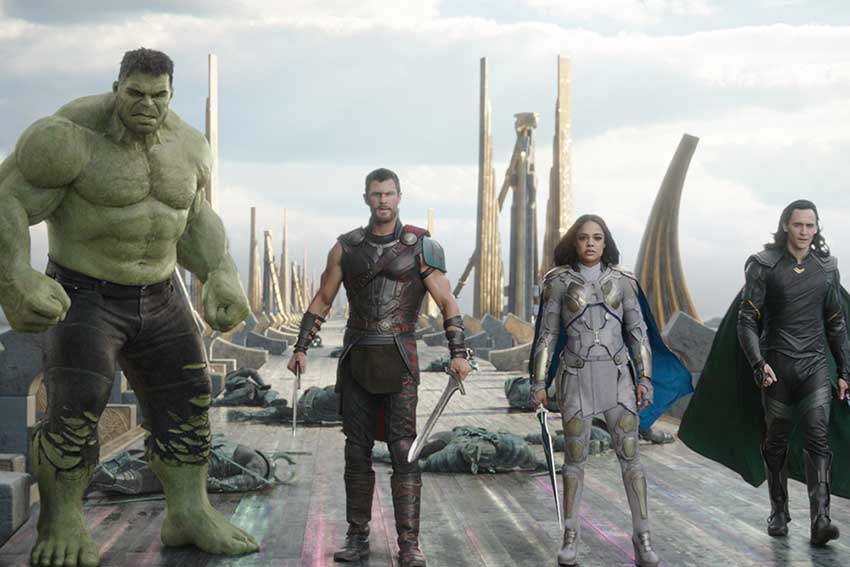 Superhero movies as of late take themselves too seriously with dark imagery and themes that remind us of the turmoil going on in real life. That all changes with THOR: RAGNAROK, a film that interjects some rock n' roll flavor into the tiring superhero franchise.

In THOR: RAGNAROK, after Hela (Cate Blanchett) destroys the god of thunder's hammer, we find Thor imprisoned on another planet and forced to fight as a gladiator against his old Earth friend, the Hulk. Meanwhile the all-powerful Hela is hell bent on destroying Asgard.

Marvel's THOR gave us Chris Hemsworth's Thor and Tom Hiddleston's Loki who are the heart of the original movie and the follow-up but it was evident in THOR: THE DARK WORLD that the Marvel comic book hero's story was running out of steam. That's until director Taika Waititi breathed new life not only into the THOR movies, but the superhero genre in general. The independent New Zealand filmmaker brought his quirky flavor and comedy to a real adventure story.

The best way to describe THOR: RAGNAROK is like a giant tie-dye throwback party. The colorful palette is eye-catching and inspired by comic book illustrations. There's an 80s flair to the imagery with matching music that adds a groovy tone to the soundtrack. The music is heavy on the 80s influence with some TRON-sounding cues and sounds that recall classic adventure movies.  Using Led Zeppelin's classic track "Immigrant Song" is also a very cool touch to the Marvel film.

Loki and Thor's bromance is sidelined by Thor and the Hulk/ Bruce Banner's (Mark Ruffalo) growing friendship in the third THOR movie.  That made for some hilarious interactions between the green behemoth and Thor. This is the best Hulk rendition of all-time with a realistic look that captured Mark Ruffalo's rugged good looks.

The ladies of THOR: RAGNAROK are also rockin' the bad assery. Cate Blanchett's Hela is one scary, goth-looking nemesis while Tessa Thompson's Valkyrie is a show stopper who deserves her own spin-off.

Loki, unfortunately was no scene stealer in this third outing. Although he provided his usual mischief, Hiddleston seemed like the only character that hasn't advanced in this rebooted THOR franchise. The Loki wig was also distracting because it looked so unnatural with bad hair dye that was darker than what we're accustomed to seeing.

Previous THOR movies were enjoyable and entertaining, but THOR: RAGNAROK is easily the best one out of the trilogy. You get the best of both worlds - great action and a lot of comedy that drives this adventure story into new heights.