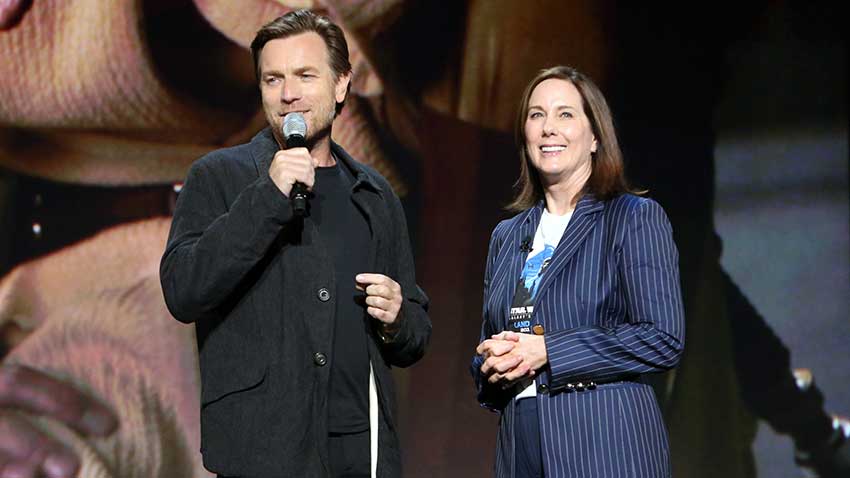 Lucasfilm's Kathleen Kennedy announced some exciting news for STAR WARS fans at the D23 Expo. Ewan McGregor is indeed reprising his role of Obi-Wan Kenobi for Disney+. The series is set to shoot next year in London, and the scripts have been completed. In other news, Diego Luna and Alan Tudyk visited D23 to tease their prequel in the Cassian and K2SO, which begins shooting next year. Watch our recap of the STAR WARS news which dropped for Disney's streaming service.

The Clone Wars" is returning as a series and picking up where it left off on Disney+ in February 2020. The entire STAR WARS film catalogue will be available on Disney's streaming service.

The stars and filmmakers of "The Mandalorian" made an appearance with executive producers Jon Favreau and Dave Filoni bringing along series stars Pedro Pascal, Gina Carano, Carl Weathers and Giancarlo Esposito, along with Taika Waititi, who brings the droid IG-11 to life. They also premiered an amazing first full trailer for "The Mandalorian," and I predict it will be the best STAR WARS project since Disney bought the franchise. The image of storm strooper helmets on spikes informs us that this will be a dark western style story. "The Mandalorian" will be available on day Disney+ goes live.

Two shows which we won't see until late 2020 or 2021 are the ROGUE ONE prequel starring Diego Luna and Alan Tudyk, and the Obi-Wan adventures as they don't begin shooting until next year, but Kennedy reveals the scripts are complete. Both shows do not have titles yet, although Tudyk who plays K2SO had a few funny ideas of his own for the Cassian adventures. .