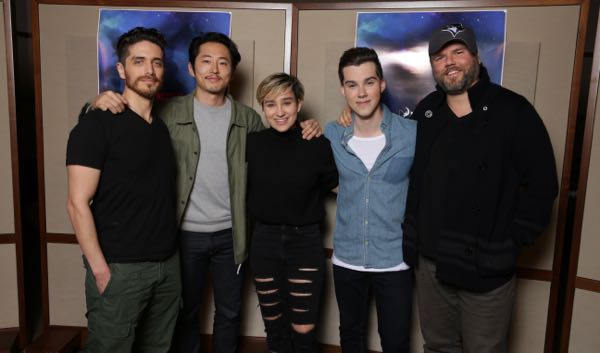 Dreamworks Animation revealed the secrets behind Netflix’s VOLTRON: LEGENDARY DEFENDER with the cast at this year’s Wondercon in Los Angeles. Cast members including “The Walking Dead’s” Steven Yeun were unveiled at a panel in addition to showcasing never-before-seen artwork and footage of DreamWorks Animation’s all-new Netflix Original Series. Watch the trailer and see images from the new show below.

Thirteen episodes of VOLTRON: LEGENDARY DEFENDER will begin streaming on June 10. Steven Yeun ("The Walking Dead") will be voicing Keith, the Red Lion. He was not present at the WonderCon panel, but he did send a video greeting probably from the set of “The Walking Dead.” Other cast members at the panel including  Tyler Labine, Josh Keaton, Jeremy Shada, Bex Taylor-Klaus, Kimberly Brooks and Rhys Darby. Executive Producer  Joaquim Dos Santos  (The Legend of Korra, Avatar: The Last Airbender ), Co-Executive Producer  Lauren Montgomery (The Legend of Korra), and writer Tim Hedrick  (The Legend of Korra, Avatar: The Last Airbender) sat alongside newly unveiled cast members to showcase new material for the reboot of the popular animated series.

Attendees were treated to a sneak peek of the epic journey five friends embark upon as they  are thrust into a sprawling intergalactic war, and only through the power of teamwork can they unite to form the mighty warrior VOLTRON!

Dos Santos shared  "As children of the 80's who grew up with Voltron what was there not to love? You had 5 awesome lions, piloted by 5 awesome heroes who combined to form a giant, sword wielding Titan! It unapologetically married Sci-fi and Fantasy in one incredibly over the top, bombastic package. Fans of the new series [Voltron: Legendary defender] can look for us to keep all those elements but also expect a much more fleshed out universe with a rich backstory and characters who will evolve over the course of the series."

Synopsis:
From days long ago, from uncharted regions of the universe comes the Netflix Original Series, VOLTRON: LEGENDARY DEFENDER! DreamWorks Animation reimagines one of the most popular fan-favorite shows of all time in this all-new comedic action-packed show from executive producer Joaquim Dos Santos (The Legend of Korra, Avatar: The Last Airbender) and co-executive producer Lauren Montgomery (The Legend of Korra).

Five unsuspecting teenagers, transported from Earth into the middle of a sprawling intergalactic war, become pilots for five robotic lions in the battle to protect the universe from evil. Only through the true power of teamwork can they unite to form the mighty warrior known as VOLTRON: LEGENDARY DEFENDER.
blog comments powered by DISQUS back to top