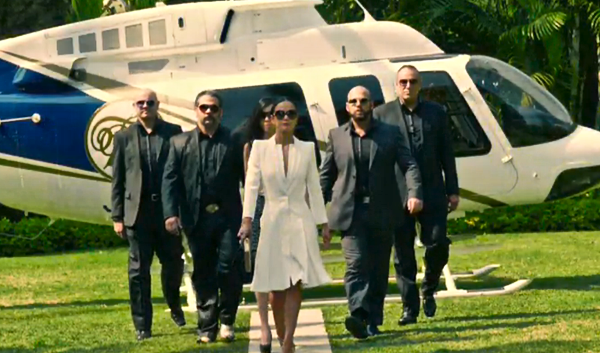 The adaptation of the Spanish novel “La Reina Del Sur” is getting an American version airing on the USA Network, and we got the first look at Alice Braga (I Am Legend) nas the female drug cartel leader.

Starring Alice Braga ("City of God"), the original drama series QUEEN OF THE SOUTH is based on the literary page-turner "La Reina Del Sur," the top-selling novel by the internationally acclaimed author Arturo Pérez-Reverte, which also yielded a Telemundo series starring Kate del Castillo that became one of the most popular super series of all time for USA's sister network.

QUEEN OF THE SOUTH tells the powerful story of Teresa Mendoza (Braga).  When her drug-dealing boyfriend is unexpectedly murdered in Mexico, Teresa (Braga) is forced to go on the run and seek refuge in America, where she teams with an unlikely figure from her past to bring down the leader of the very drug trafficking ring that has her on the run.  In the process, she learns the tools of the trade and strategically positions herself to become the leader of the cartel.