Juanes To Guest Star on New Show JANE THE VIRGIN

When JANE THE VIRGIN premieres on October 13, Juanes’ “Un Flor” will be prominently featured on the show which marks a first collaboration between a Spanish-language artist and a English-Language Network TV series.

Read more about it in the official press release below.

Jane The Virgin New Show Clip: Blame it on Grandma 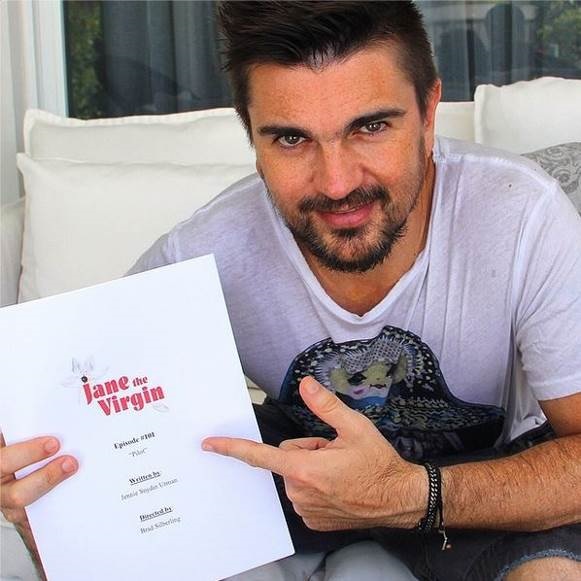 Juanes is set to play an idiosyncratic music producer and ladies man, who is interested in producing a demo for Jane’s mother Xiomara.

Additionally, continuing his career history of groundbreaking moments bringing all-Spanish Language music to wider audiences via English TV broadcasts in the United States, the Colombian rock superstar  has reached a Hollywood milestone with a unique multi-song arrangement between a Latin music artist and a primetime English network series.  This will begin with the production prominently featuring Juanes’ new single “Una Flor” in the October 13 premiere episode.

Jane the Virgin’s Emmy and Golden-Globe winning executive producer Ben Silverman (The Office, Ugly Betty) said of the collaboration with Juanes: “It is an honor and a privilege to be working with Juanes on this genre re-defining series. Together with Juanes and our fantastic partners at the CW and CBS Television Studios, we aim to provide a voice to the traditionally underserved Hispanic audience in the US. In Juanes, a true global music superstar transcending language barriers, we could not have found a more brilliant partner to fulfill this vision.”

“Una Flor” appears on Juanes’ recent chart-topping and already platinum new album “Loco De Amor” – produced in tandem with famed rock producer Steve Lillywhite.  Released in March, “Loco De Amor” has already been declared “One of the Five Best Albums of 2014 so far” by PEOPLE Magazine, saying it “is one of the best records out now in any tongue… Juanes has never sounded better.” Likewise, the New York Times welcomed the release as a “Latin pop blockbuster …a euphoric, melodic romp across the hemisphere.”

In conjunction with the release of “Loco De Amor,” Juanes already gave the first Spanish-language performance on the new “Tonight Show starring Jimmy Fallon,” as well as a TODAY Show Plaza Concert Series appearance.  This follows other landmark television moments for Juanes such as the first Spanish language performances on DANCING WITH THE STARS and THE MACY’S THANKSGIVING DAY PARADE – as well as appearances on THE GRAMMY AWARDS, SESAME STREET, LIVE WITH KELLY & MICHAEL, and multiple visits (more than any other all Spanish-language artist) to THE TONIGHT SHOW WITH JAY LENO.

In another example of Juanes’ ability to also bring all-Spanish language music to major/mainstream music events in the United States, he was one of the featured headliners of the Jay-Z curated “Budweiser Made in America Festival.” As the only Latin music artist on the bill, Juanes joined Imagine Dragons, Kanye West, John Mayer, Kings of Leon, Kendrick Lamar, Pharrell Williams, Tiesto & more as the headline performers on the Bi-Coastal Labor Day Weekend festival. In October, Juanes will likewise join another top festival bill of global artists, as he performs on The Austin City Limits Music Festival alongside Eminem, Pearl Jam, Outkast, Skrillex, Beck, Lorde, The Replacements & more.